Gitlin said there are many long-term growth trends that are driving Carrier. The pandemic has opened new possibilities when it comes to creating safe indoor environments, he said. Carrier is also a leader in cold storage technology, which is needed for vaccines and other critical medical supplies, he noted.

When asked about inflation, Gitlin said costs are rising, but Carrier is working hard to reduce costs so when prices retreat its gross margins will expand even more.

Let's look beyond the fundamentals and check out  Carrier's charts and technical indicators.

In this daily bar chart of CARR, below, we can see that prices broke down from a sideways trading range in January. Prices broke below the 200-day moving average line and continued lower. CARR is trading below the declining 50-day average line as well as the cresting 200-day simple moving average. A bearish dead or death cross can be seen earlier this month when the 50-day average declined below the slower-to-react 200-day line. The On-Balance-Volume (OBV) line has been in a decline from September and tells us that sellers of CARR have been more aggressive than buyers for several months. The 12-day price momentum study in the bottom panel shows a higher low from January to February while prices made a lower low. This is a small bullish divergence but it could be signaling a potential trading bounce.

In this weekly Japanese candlestick chart of CARR, below, we have yet to see a bottom reversal pattern (the daily chart is more positive). The two most recent candles could be spinning tops with their small real bodies, but bullish confirmation is lacking so far. Prices are below the 40-week moving average line. The weekly OBV line shows a decline from August but the movement in February could become a low. The Moving Average Convergence Divergence (MACD) oscillator is below the zero line but has started to narrow and that is a slight positive sign.

In this daily Point and Figure chart of CARR, below, we can see that prices have reached a downside price target of $45. Reaching a price target does not mean this is a buying opportunity, but it can mean that technically oriented traders may be covering shorts. 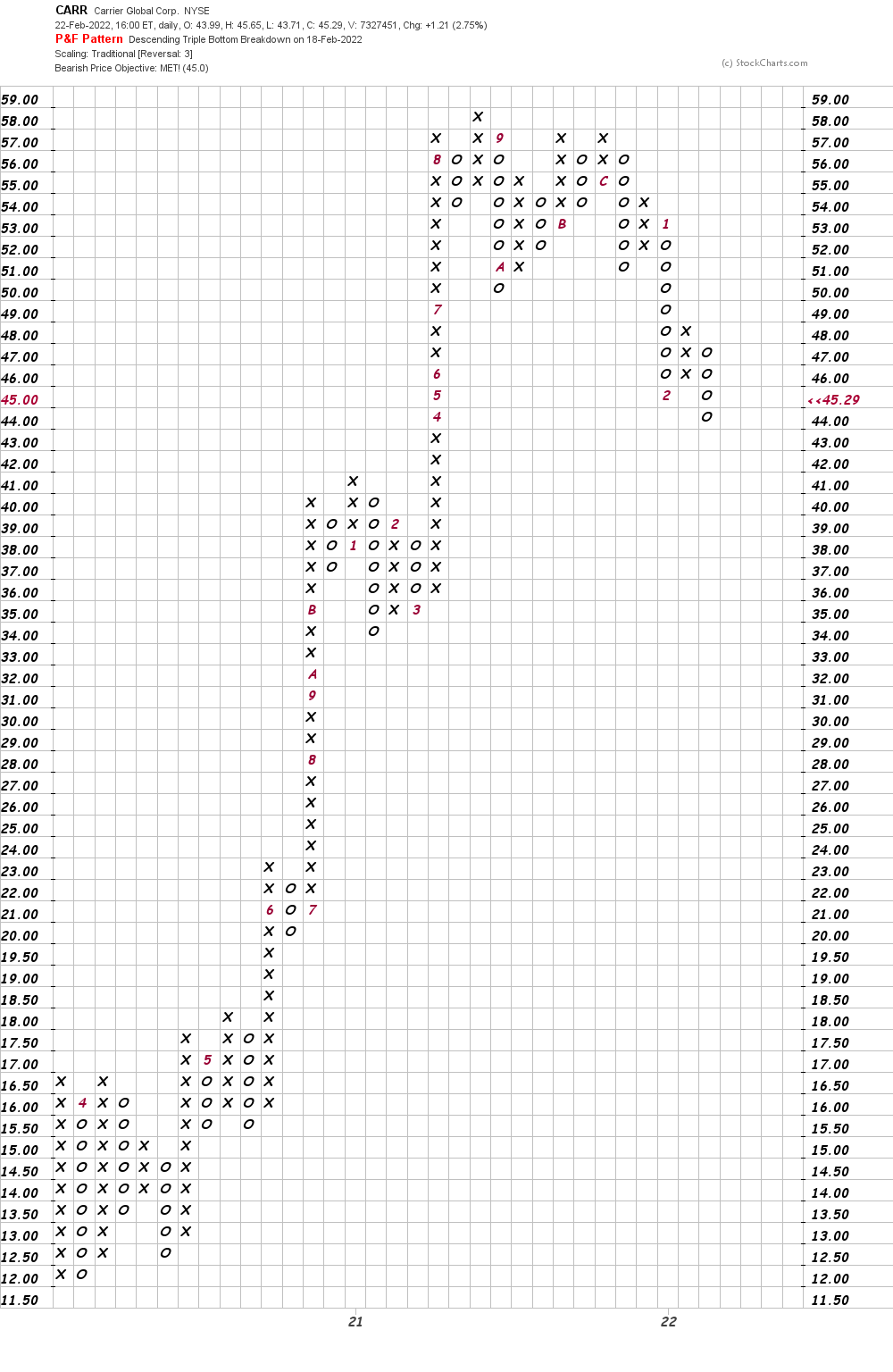 In this weekly Point and Figure chart of CARR, below, we can see that the $34 area is a potential longer-term price target.

Bottom line strategy: The daily candlestick chart of CARR (not shown) shows us a bullish engulfing pattern. This pattern along with the bullish divergence from the price momentum study could give us a trading bounce. Nimble traders could buy CARR here for a rebound to the $50-$52 area. This just a short-term trade. Risk to $43.