At the top of Jim Cramer's Mad Money program Tuesday night he weighed in on the American consumer. After robust retail sales numbers, it's clear no one told the American consumer about tariffs, trade or Brexit, Cramer said. But while retail remains strong, the market overall continues to send mixed messages and analysts are questioning the earnings potential at CarMax Inc. (KMX) .

Let's check and see if there are any new developments on the charts.

In this daily bar chart of KMX, below, we can see an April to July rally in the shares. Prices climbed nearly 50% in four months but the trading volume did not increase. There was a volume surge in late March and another one in late June.

Interestingly, the daily On-Balance-Volume (OBV) line bottomed in December/January and climbed to early July. The OBV line has weakened recently and this might be a turn for the stock price. The gap lower on Tuesday is a wake up call to the bulls.

The Moving Average Convergence Divergence (MACD) oscillator just made a lower peak than in April even though prices made a higher high. This is a bearish divergence and could foreshadow a price correction. The 12-day price momentum study (not shown) also shows a lower momentum higher from April to July to tell us that the price acceleration has slowed.

In the weekly bar chart of KMX, below, we can see that prices are above and probably extended versus the rising 40-week moving average line. The weekly OBV line has been strong but may have just peaked.

The MACD oscillator has begun to narrow and this could lead to a take profits sell signal.

In this Point and Figure chart of KMX, below, we can see a bullish price target of $104 being projected. A decline to $80.63 will weaken the pattern and a trade at $89.96 will refresh the uptrend. 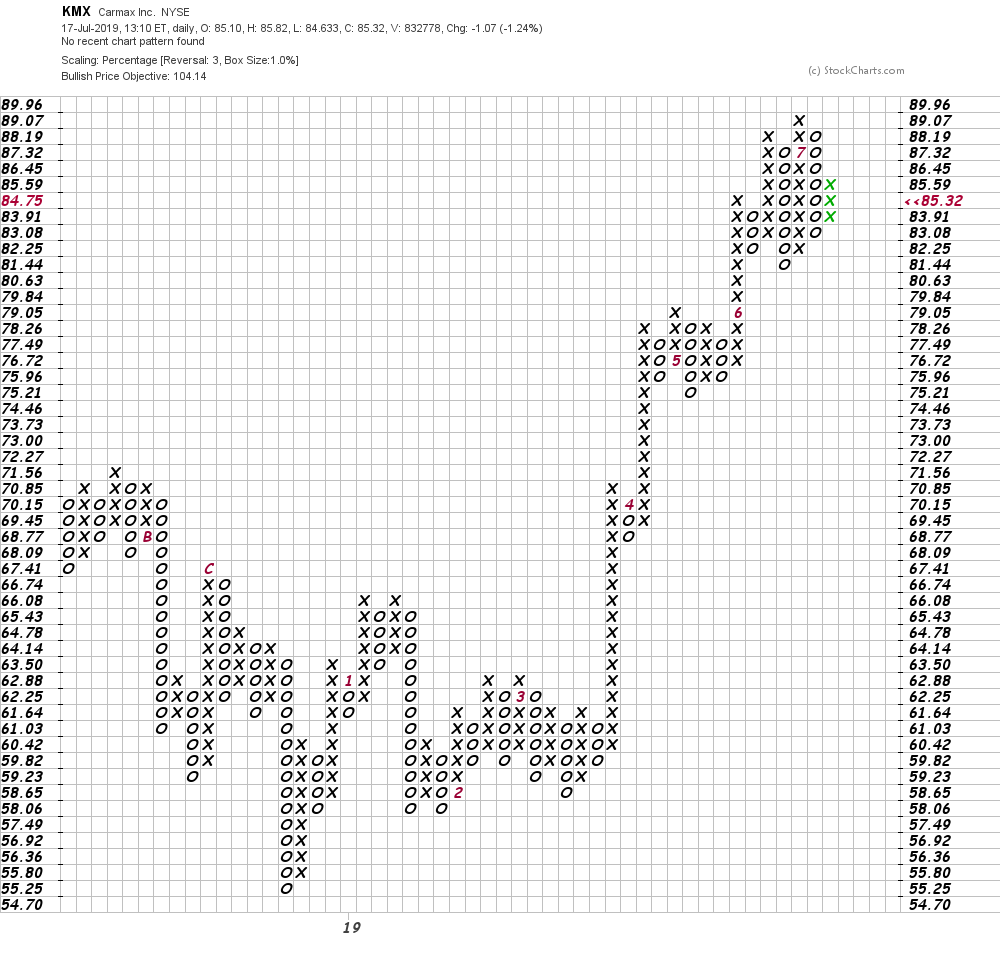 Bottom-line strategy: With Tuesday's gap lower and a couple bearish divergences I would raise sell stops on existing longs to a close below $80 and would even suggest booking some profits.

Get an email alert each time I write an article for Real Money. Click the "+Follow" next to my byline to this article.
TAGS: Investing | Stocks | Technical Analysis | Automotive | Retail | Mad Money