Two of the best weeks for the S&P 500 are in late November. Of course, on occasion, there is a "this year is different" phenomenon, but the odds are sharply in favor of the bulls on the week of, and the week after, Thanksgiving.

Jeff Hirsch, a friend, and author of the "Stock Trader's Almanac" noted, "Thanksgiving week has a notorious 'holiday-fueled' bullish bias as do the last seven trading days of the month. However, the bullish bias has weakened over the last several years."

He added, "The best short-term trade appears to be getting long into any weakness in the week or days before the holiday and selling any subsequent rally toward the end of Thanksgiving week or before month-end." 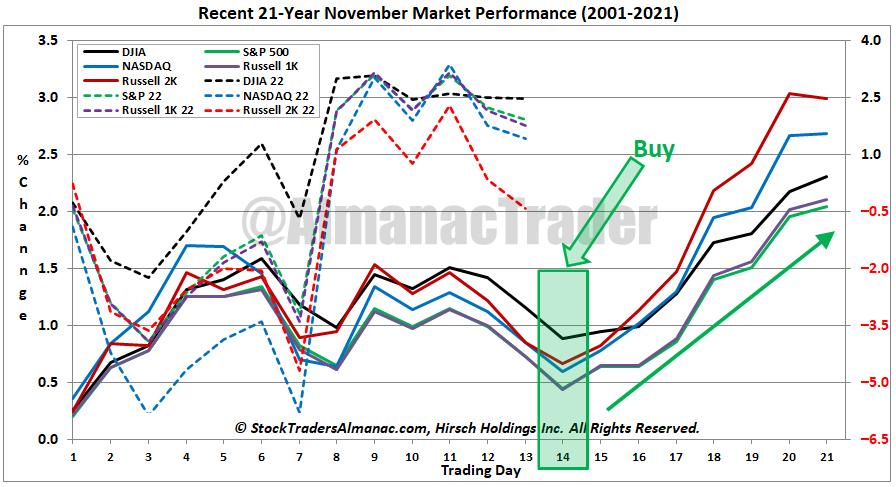 In addition to holiday seasonality that tends to support the stock market, we often see stability following the conclusion of mid-term elections. Thus, until the market proves otherwise, we must recognize an uptrend can occur even if the headlines are negative.

Nevertheless, we are conflicted.... The weekly E-Mini S&P 500 chart defines a bull and bear market by a long-dated trendline that comes in at 4050 to 4080 in the S&P. This week's rally touched it and failed. That is bearish. Obviously, this is at odds with seasonality.

I've been following markets for more than I would care to admit, and I've seen the holiday season wreak havoc on unsuspecting bears.

Although the rally happens almost every year, it manages to catch people off guard, because it is accompanied by bearish headlines and complacency. The seasonal strength often extends into late December. Only a break below 3870 would negate the bullish momentum on a daily chart and potentially thwart the seasonal rally.

For all our sake, I'm hoping for a quiet trading holiday. Please focus on enjoying time with friends and family!

Get an email alert each time I write an article for Real Money. Click the "+Follow" next to my byline to this article.
TAGS: Futures | Investing | Stocks