Canopy Growth Corp. (CGC) reported its fiscal fourth-quarter performance late on Thursday.... like four hours after the exchanges had rung their closing bells. Maybe management hoped traders had gone home for the day and the pajama crowd might save them. There was some good news. There was also some lousy news. Really lousy. Let's explore.

Canopy Growth went to the tape with a loss per share of C$0.98 on revenue generation of C$94.1 million. The revenue number did just manage to beat expectations on whopping year-over-year growth of 312.5%, but with far-pedestrian sequential growth of 13%. The bottom-line number was a miss of epic proportions.

Canopy Growth reported recreational cannabis gross sales of C$68.9 million, a decline of 4% quarter over quarter, while the performance was much worse for medical use cannabis. That line printed at just C$11.6 million for Canada (down 41%) and C$1.6 million (down 25%) internationally.

I could be wrong, but if a cannabis company sees declining sales in its home market for both recreational and medical use, plus earnings growth that prints in the minus column after finally getting over the top the quarter prior, it would give me more than pause as an investor.

Don't get me wrong. Canopy Growth can easily meet its obligations. Thanks to large equity stake taken by beverage giant Constellation Brands (STZ) as well last year's convertible note offering, Canopy Growth is sitting on a pile of cash -- C$4.5 billion. Oddly, it was the rules around those notes that enlarged the company's loss for the quarter, turning an operational loss of C$174.5 million into a paper-fueled loss of C$323.4 million.

Canopy Growth continues to grow production, doubling the harvest from quarter to quarter, and is expecting to repeat that feat for the current quarter. It states that it needs this ramp to meet demand.

Shareholders have approved a deal for CGC to acquire Acreage Holdings should the U.S. ever legalize the use of cannabis on a federal level. Of course, that in theory would explode demand. I just don't see it soon. There was growth this quarter related to the acquisition of Storz & Bickel, a German vapor device manufacturer. I think it likely that this business continues to increase. 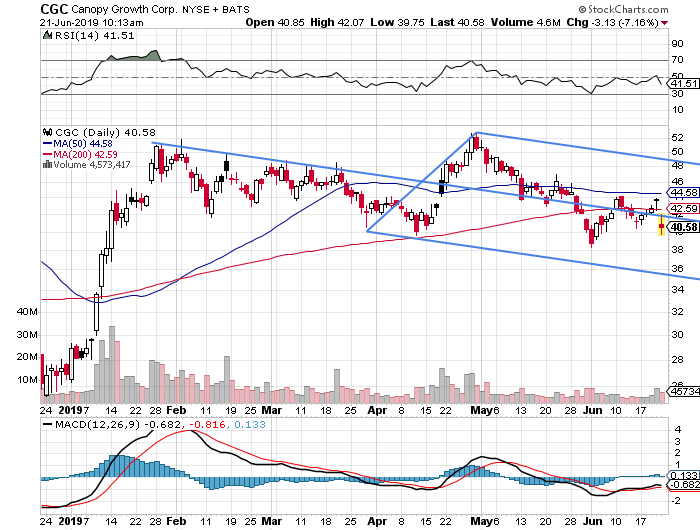 These shares have largely traveled sideways to lower for six months now. Now that the share price has given up the 50-day simple moving average (SMA), will it act as resistance, as has the 200-day line? Bottom line: I do not see a lot of reason to fear missing out by not getting involved just yet.

Should the shares approach and close below the $38 level in the short term, $36 is realistic. My idea is to trade something else and keep an eye on Canopy.

Get an email alert each time I write an article for Real Money. Click the "+Follow" next to my byline to this article.
TAGS: Earnings | Investing | Stocks | Marijuana | Canada | Real Money | Cannabis | Stock of the Day

Dividend Aristocrat Ross Stores and Kohl's has suspended their dividends during the height of the pandemic. Let's see how the stack up.

Smaller to mid-cap names have fared somewhat better than large cap tech, but make no mistake... there is a circle of life/death here.

Here's the Only 'Risk Free' Way to Sell Options

Let me walk you through how to make money without putting yourself in peril.

Investing can be fun until it turns brutal for what seems to be no reason.