Despite their designation as an essential service during the Covid-19 pandemic and a recent bump in sales as consumers rushed to stock up on supplies, cannabis companies could face significant weakness in the second quarter as a whole, according to Canaccord Genuity analyst Bobby Burleson.

Cannabis analytics firm Headset has documented a spike in cannabis sales as cities and states declared lockdowns and asked residents to stay home. Many consumers were worried about their supplies and ran out to the stores, leading to long lines and active cash registers.

Headset said sales on March 16 rose by 159% in California, 100% in Washington and 46% in Colorado. Burleson said he believes other states are experiencing similar jumps in business. However, many of the companies Burleson covers said they anticipate net lost revenue due to diminished foot traffic that would only partially be offset by delivery services.

For example, Planet 13 Holdings Inc. (PLNHF) has begun 24-hour delivery services to address pandemic social distancing. However, because the superstore is located in Las Vegas, which is essentially shut down, sales are expected to decline dramatically. This dispensary depends heavily on tourist traffic, which is now nonexistent, and there is no way to know when that traffic will return.

Some states have stepped up to assist cannabis sellers by permitting delivery in areas where it wasn't allowed or allowing them to provide curbside service. Some areas are allowing the dispensaries to stay open if social distancing measures are enacted.

Still, Burlseson said he is cutting his price targets for cannabis companies by an average of 46%. Keep in mind that the average stock price for the companies in his coverage universe has fallen 52% in the past month due to pandemic worries. 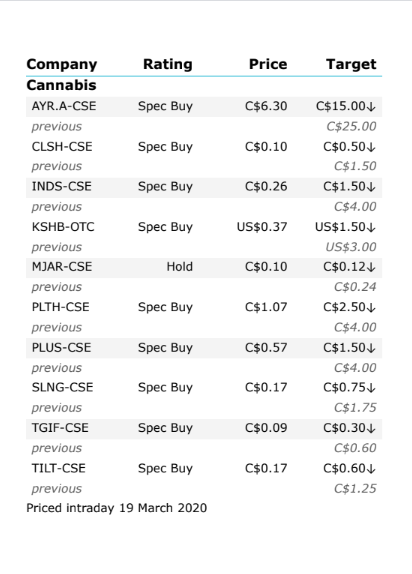 "While we are not yet reducing our estimates, we anticipate sharp revisions this earnings season," Burleson said. "We also expect lingering uncertainty following the cuts that could hamper near- to medium-term share performance." However, Burleson did temper the negativity by saying he expects a sharp recovery once the virus overhang lifts, noting the resilience of cannabis consumers.

Burleson said he thinks Ayr Strategies' (AYRSF) balance sheet is an asset for the company, but he expressed concern about the Massachusetts market. He said there will be a decline in cannabis sales there following the run-up in sales ahead of the virus lockdown. Following Burleson's report, Massachusetts stopped recreational sales as of March 23. The state said it would allow medical marijuana sales, but that recreational dispensaries must close. Ayr Strategies operates two medical-only dispensaries in the state and is a leading medical wholesaler and could benefit from the medical-only mandate.

Like Planet 13, CLS Holdings (CLSH) is located in Las Vegas, but it has been focusing on local residents and could weather the lockdown because it is able to stay open as an essential service. Meanwhile, Indus Holdings recently shored up its financing and Burleson said he believes the company is well-positioned to withstand the current market turbulence. The analyst thinks Indus eventually will take market share in California's wholesale market once things return to normal.

Plus Products (PLPRF) already gets 20% of its business from delivery and so could benefit further from increased delivery purchases. "Even without a sizable offset in delivery volumes... we believe Plus is poised to weather a significant slowdown in sales for an extended period with the company operating at a current cash burn rate of roughly $1 million per month," Burleson wrote. He also said he thinks the company can extend the terms of a loan due in February 2021.

Headset noted that Plus Products has had the top-selling product during the pandemic. The company said the Plus Unwind Gummy (4.5mg THC plus 0.5mg CBD per serving) saw the largest sales lift.

KushCo Holdings (KSHB) has already reported results that were disappointing, according to Burleson. But, he wrote, "As normal demand returns we expect the competitive landscape for ancillary providers to be more so tilted in favor of full service operators with deeper penetration with MSO's like KSHB so we expect the company to gain share."

As is typical in the cannabis industry, there is no standard response among companies across the legal states. Of the legal medical marijuana states, most dispensaries look to remain open. The adult use cannabis landscape is a hodgepodge of companies remaining open as an essential service to some opting to stop recreational sales to make sure there is inventory for medical patients. With this unprecedented pandemic situation, cannabis could still emerge a winner if only because it is considered a product that people need in stressful times.

Get an email alert each time I write an article for Real Money. Click the "+Follow" next to my byline to this article.
TAGS: Investing | Stocks | Marijuana | Mad Money | Cannabis | Coronavirus