There used to be a joke about how technical analysts are always waiting for one more rally.

Considering that I thought we would not be short-term overbought until Tuesday of and the market turned down Friday, I feel like the joke is on me.

Now if the S&P 500 opens on a gap under 2840, we don't know if that will still hold true. I always prefer to see a break of an important level with positive divergences, because then it feels more like a true positive divergence.

The cumulative advance decline line did not make a lower low, and neither did the same indicator using common stocks only. You might recall that in late July this breadth indicator did not make a higher high, so it was a warning. Again, we don't know if this would still be the case if we break 2840, but that's what we have so far.

The McClellan Summation Index is still milling around, too. We have had two separate 100-point rallies in the S&P in August, and it has not been able to turn up during either one.

The best it has been able to do is stop going down for a day. It is currently at a point where it requires a net differential of positive 1,500 advancers minus decliners to halt the slide. The good news is that a day or two of good breadth and it should turn up. The bad news is that this means it's not oversold as positive 2,000 is oversold.

Friday saw 90% of the volume on the downside for the New York Stock Exchange, which typically means we rally in a day or two, because of too much selling. In addition, the Volume Indicator is now at 44%, so it has moved into the top-end of an oversold condition.

I noted recently that the 30-day moving average of the advance/decline line -- what I use as an intermediate-term overbought/oversold oscillator -- won't get oversold until after Labor Day. The issue with this indicator is the math. Lots of down days in a row get this to an oversold condition. We have not had more than two red days in a row since Aug. 5, so this indicator struggles to get to a "good" oversold condition.

The put/call ratios remain high and the 10-day moving average is elevated. I discussed the American Association of Individual Investors' weekly survey late last week noting that we are likely to see a peak in the four week moving average of bears, when the report is released later this week.

But the Investors Intelligence bulls are at 49%. They were 42% in May at the low and 29% in December. I do expect to see them decline this week, when they are released midweek, but the current reading of 49% is not "too bearish."

The bottom line is that I'm not sure I trust the market if it rallies or if it declines. Does that mean the chop can continue? Sure. But I prefer some sort of resolution. 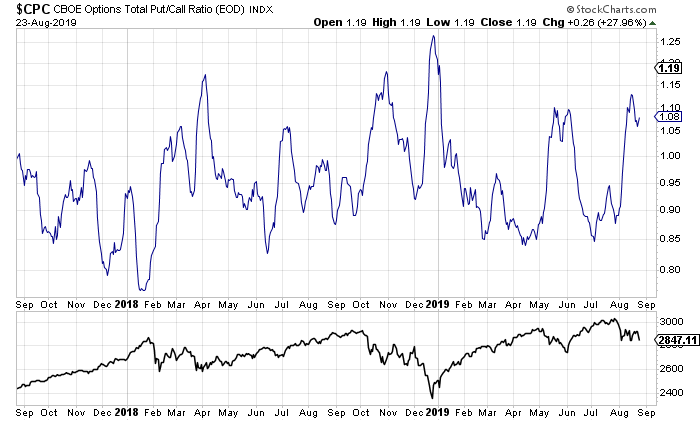 Note: Meisler will not be writing until her next column appears on Sept. 3.

Get an email alert each time I write an article for Real Money. Click the "+Follow" next to my byline to this article.
TAGS: Federal Reserve | Investing | Stocks | Bearish Bet |