I've never understood why something that is or can be good for Amazon (AMZN) automatically makes it bad for another company.

Walmart (WMT) announced it will be offering free "NextDay" delivery and suddenly Wall Street worries about the cost. The company's plan is to offer free NextDay delivery on a wide range of general merchandise without a membership fee -- a direct challenge to Amazon. However, before the bears pounce it is important to understand the offer.

First, the offer is gradually being rolled out with only Phoenix and Las Vegas initially before expanding into southern California. Eventually, Walmart will reach 75% of the U.S. population with its NextDay free shipping, which sounds like a lot, but when you look closer you'll find that it only encompasses 40 of the top 50 major U.S metro areas. It really doesn't take a lot of locations to reach the majority of the U.S. population.

Second, only specific items qualify for NextDay. The eligible items will all come from a fulfillment center closest to the customer. This will minimize the number of boxes needed for shipping and maintain the shortest distance possible for delivery.

Third, all the items in the cart must be eligible for NextDay to receive next-day delivery.

Fourth, the order total must exceed $35.

In short, Walmart has designed this to minimize costs. It's possible the free delivery plus the minimum order may result in a net equal to or even greater than the current e-commerce. The estimated cost for the plan is between $75 million and $215 million. Even at the top end of the range, this equals less than one-half of 1% of total sales and roughly 3% of net income.

The increased usage alone should dwarf the costs and I imagine there will be enough profits, albeit thin margins, to cover the costs even on the bottom line.

It's tough to react to the news with Walmart set to report earnings this week. The stock has either been dead post-earnings or a huge mover over the past 1 1/2 years.

Three times the shares have moved 2% the day after reporting earnings and three times they has moved 9% or more. Feast or famine for volatility players.

Half the moves have been higher with the other half of those lower, so directional players have the same feast or famine. The only consistency comes in the form of the post-earnings close and the action over the next two weeks. Walmart has closed lower 13 days after the first day of post-earnings trading for seven straight quarters. 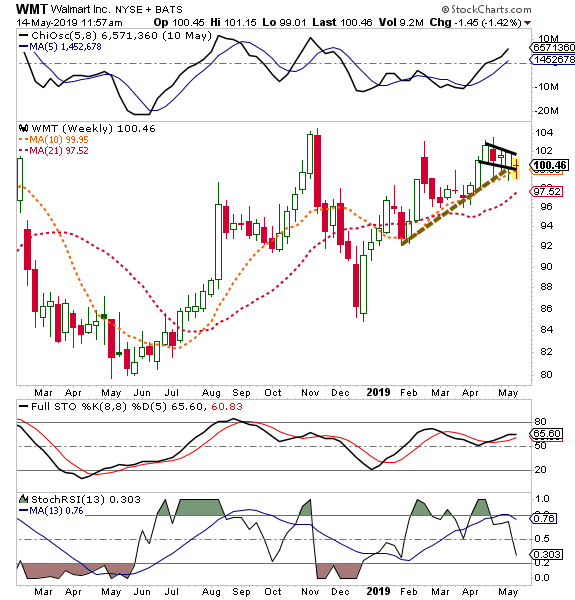 The current weekly chart favors volatility. We have a small bullish flag combined with a longer-term wedge. A push above $102 or under $98 should create a continued move of $4-6.

The NextDay news is great headline fodder, but I don't see it as a bullish or bearish catalyst on shares. Instead, I'd turn my focus to earnings and pay more attention to the current macro and domestic trends management discloses.

Get an email alert each time I write an article for Real Money. Click the "+Follow" next to my byline to this article.
TAGS: Earnings | Investing | Stocks | Technical Analysis | Retail