But I noticed something. I like broad rallies, because look at how the number of stocks making new highs expands on those days. I mean, look at all the opportunities to find a stock that is going to new highs. What a difference from last week, or even Monday, when we could barely get over 250 new highs.

Now here's what else I noticed. Those spikes in new highs, they are like one-off events. It's not as though they build on themselves, and the new highs continue to expand and improve. Let's take last summer. The green arrow saw a terrific expansion in new highs. Then we corrected, but kept on rallying thereafter. But notice how new highs could barely increase after that. Finally, at the red arrow they did, just before the market went down.

Now look at January's red arrow. Again, no follow through at all. It's as if we're only entitled to one good day before the market opted to correct or get narrow. I would like to say I understand why, but I'd only be guessing at this. The value stocks -- or really anything that is not concentrated in the tech world -- has no staying power in this market.

When tech rallies, the market gets narrow. Oh sure, the indexes lift because they own the indexes. But the new high expansion stops. I would love to be proven wrong and that this time will be different and we will see new highs continue to expand, but so far that has not been the case.

I want to revisit the charts of Tesla (TSLA) and Microsoft (MSFT) that we have looked at a few times of late. In mid-January, I said I thought Tesla was going parabolic and it finally did go that way late in the month and early in February. Look at the volume on that rise. It surged. There were essentially a few days at that short-term blow off with extremely high volume. 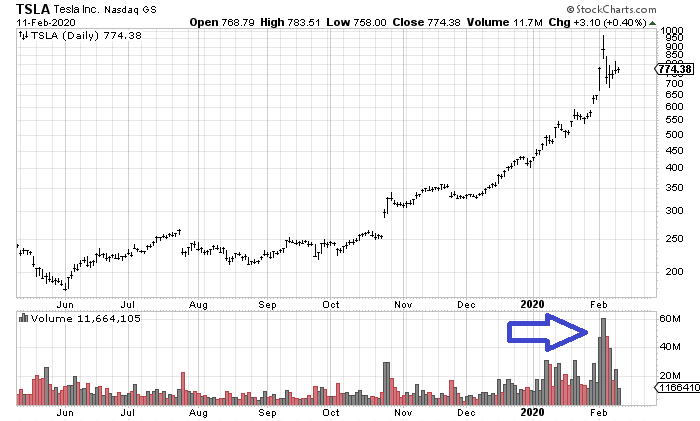 In late January, I also commented that Microsoft was verging on that same feeling of a parabolic move. The volume is different, but take a look at the volume on Tuesday's reversal. It's the first such high volume red day it has had since this move began. 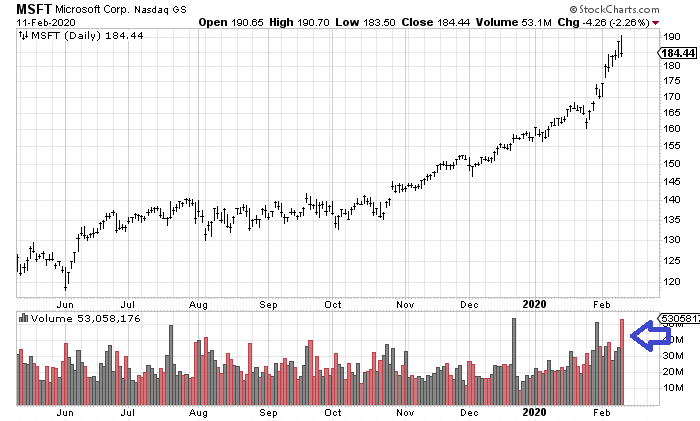 As my colleague Jim Cramer once said, the market is not a sofa, it is not a place to get comfortable. And these two charts prove just that.

Get an email alert each time I write an article for Real Money. Click the "+Follow" next to my byline to this article.
TAGS: Investing | Stocks | Technical Analysis | Automotive | Technology |

History shows that 'scary sell-offs' often turn into bounce-backs, so here's some advice for uncertain times like this.

Why Blame It On Coronavirus? It's All About the Fed's Free Money

Only two things can save the market right now, the Fed cutting rates aggressively or the virus being contained.

Let's Take a Close Look at the Near-Term

I have three indicators to find whether we're oversold and one says we are; also I expect we should bounce and come back down.

Jim Cramer: Hope for the Best, Plan for the Worst

Is this the end of the world? No. You still need to plan for your financial well-being, even as the CDC tells us 'this might be bad.'