Everyone seems to be so bearish whenever the topic of inflation comes up. I am old enough to remember inflation in the 1970s. My parents had no patience to wait in gas lines so they sent me and my sister -- with our brand new drivers licenses -- on the even and odd days to wait for them to fill our tanks.

Of course lately the topic has moved from inflation to stagflation. Whatever it is, I thought it might be a good idea to take a gander at the chart of the S&P 500 from the 1970s. Because you see, it is my impression that the majority believe the 70s were awful for stocks when the reality is that the early 70s saw a bear market. The second half of the decade saw a wide trading range.

As a small refresher we had a Nifty Fifty market in the early 70s. A group of approximately 50 big cap stocks were the go-to stocks and everything else languished. That game came to an end in early 1973, and the market went down. It halved. But look at this chart of the S&P from 1974 to 1980. The bottom of the bear market was in the fourth quarter of 1974. Note: not all fourth quarters are great!

After the market nearly doubled in 18 months, it went sideways for most of 1976. It corrected in 1977 and rallied again into the end of the decade. Look at that chart. It was a trader's dream!

What is really interesting is that we all know interest rates rose back then (double-digits!) but thanks to Richard Russell's invaluable charts, I also know that breadth outperformed in the second half of the decade. And that there was a collectible's craze. NFTs anyone?

At this point in time the market is in the midst of a battle between sentiment that leans quite bearish and indicators that can't manage to get oversold. Each week I ask the market to sell off some more so that the intermediate term indicators can get oversold. Instead of doing so, it goes down for a day and rebounds. It's never down enough to shake out all the weak holders so that the rebound can have some legs. And that has resulted in an S&P 500 that is now trading where it was on July 30.

Look at the NYSE Overbought/Oversold Oscillator. It doesn't even oscillate anymore. It sits either side of the zero line dinking back and forth. We have not had consecutive up or down breadth days in two weeks.

If you really want to see a market that can't decide, look at the 30-day moving average of the Advance/Decline line as it has hovered either side of the zero line for months. It can't get oversold enough to enjoy a rally that lasts more than a few days. It also can't get overbought enough to enjoy a decline that lasts more than a few days. This is an intermediate term Overbought/Oversold Oscillator.

Look at the Hi-Lo Indicator for Nasdaq. It is hovering at .33, the lowest since the March 2020 low. A plunge in this to .20 would get us to an intermediate term oversold reading. But it inches lower. 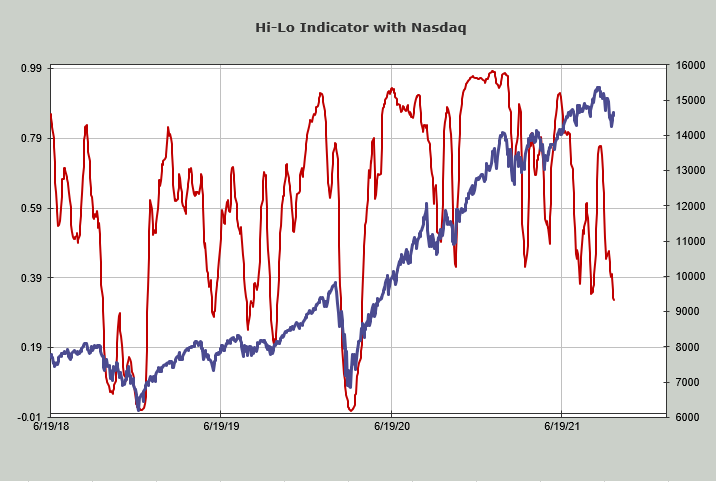 So when I ask the market to give us a sell off, what I am really asking for is for us to get out of this Either/Or Market that has created one giant chop-fest.