I can't tell you to follow my lead on this one. It's too risky. All I can do is tell you how I think and why I think what I think. Then you can decide for yourself.

I took it on the chin in Walmart (WMT) last week. Didn't lose capital considering entry. Sure looked nasty on the P&L last week, though. Took it on the chin in Kohl's (KSS) as well. Yeah, no way to sugarcoat that one. Just what are they doing over there? A "good job" is not among the multiple choices.

I would have taken it on the chin if I had been in Target (TGT) , which I had considered. Sales were really not bad, generally speaking. Profitability? Oh boy. The guidance? Yeah, that was rotten, too.

There are more retail earnings to go this week, warehouse club retailer Costco Wholesale (COST) among them. Costco is like Walmart and Target in that the physical stores are large and consumers expect to get a fair deal. Costco is different from their competitors in that Costco is a club that consumers pay a premium to join and only then do they get the best price, usually for what they want or need in greater quantities than might be available at competitors' locations. That fee, which is charged annually, is a significant addition to overall revenue generation.

I have always considered Costco to be the best-run or best-managed retailer in its class. I consider the likes of Home Depot (HD) and Lowe's (LOW) to be too specialized to be included. I watch how they operate at my local Costco stores. I watch how labor appears to try harder than they do elsewhere. I watch how they police the stores when necessary, as they did during the height of COVID. Suddenly, there were offensive lineman making sure masks were worn by both staff and consumers when those mandates were in place. Suddenly, the registers were moved apart to create more space as the need for social distancing became obvious. What they did was remove as much discomfort as possible from the experience for consumers during a very trying time. Only a highly motivated staff managed by talented individuals could accomplish something like that.

As a trader, I wanted to flee the retail space entirely. As an investor, as I am both, I held my nose and tiptoed into Costco late last week. Costco is set to report quarterly results this Thursday evening. This is indeed risky. The stock, already down 32% from its all-time high just about six weeks ago and down 16% just last week, still trades at 31x forward earnings. WMT trades at 18x. TGT trades at 14x. Let's dig into this "opportunity," shall we?

Last week, in response to the poor margin performance at the competition, three sell-side analysts rated at five stars by TipRanks reduced their target prices for Costco. All three, it should be noted, maintained their "buy" or buy equivalent ratings. The three are Mark Astrachan of Stifel Nicolaus, who took his target from $565 down to $515; Scot Ciccarelli of Truist Financial, who cut his target from $634 to $503; and Rupesh Parikh of Oppenheimer, who knocked his target down from $645 to $500.

I think we understand that Costco will not be immune to the pressures suffered elsewhere. However, we do know, or should be close on both sales and comparable-store statistics being that Costco updates us every month on its own. For April, which will be included in these numbers, sales increased 13.9% (year over year) while comp sales excluding fuel and currency fluctuations increased 8.7%. Once again, Costco does not update investors monthly on margin, so this is the risk I face.

The thing we have to wonder about, based on what happened to Walmart and Target, is just how much of a poor margin quarter is now priced in and what Costco will have to say about it. Did Costco indeed out-manage its competitors?

For its fiscal third quarter, Costco is expected to post earnings per share of $3.03 within a range spanning from $2.76 to $3.38. Revenue generation is expected to land at $51.4 billion, with the range of expectations running from $48 billion to $53 billion. Should results match consensus, these numbers would be good for earnings growth of 10.2% on revenue growth of 13.5%. The street still sees revenues growing 13.8% for all of fiscal 2022.

The balance sheet, as of three months ago, ran with a current ratio of 1.03. That does not knock the cover off of the ball, but it does get a passing grade from your pal. Costco has $12.296 billion in net cash on hand, no current debt and long-term debt of $6.658 billion. We like that. Tangible book value per share as of three months ago had reached $43.81, which represented a fifth consecutive quarter of expansion for that metric, and total debt had been at its lowest level since February 2020 (pre-COVID). Costco does not lean on "goodwill" or other intangibles to pad total assets. 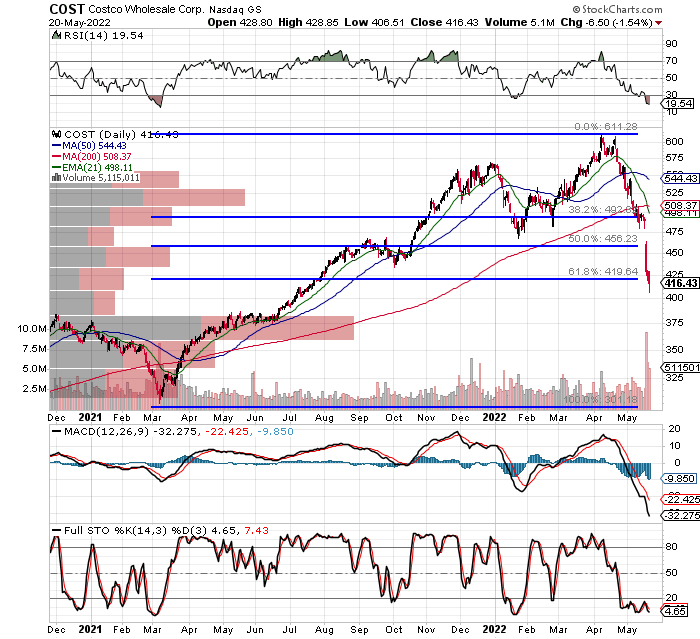 I am already partially exposed with an average price of $426.51. I would like to get that average down to the 38.2% Fibonacci retracement level ($416) of the entire March 2021 through April 2022 rally. The shares are technically oversold, on that there is no doubt. My pivot, which is really a target in itself, is $508 (200-day simple moving average), while my panic is $392 (8% drop from my current average). There is a volume shelf at $375/$380 that could perform as a support level should I need to buy back the shares back bailing at the panic.

I probably will hedge in some way as we approach earnings, but that will not happen until Wednesday, probably after the Federal Open Market Committee (FOMC) minutes are released.

(COST is a holding of Action Alerts PLUS. Want to be alerted before the portfolio buys or sells these stocks? Learn more now.)

Get an email alert each time I write an article for Real Money. Click the "+Follow" next to my byline to this article.
TAGS: Fundamental Analysis | Investing | Stocks | Technical Analysis | Consumer | Retail | Real Money | Earnings Preview

The shares of the biotech company appears to be finding a bottom but could use more sideways action to create a better base.