Car dealer AutoNation Inc. (AN) reported better-than-anticipated first-quarter earnings here on Monday. The stock is indicated higher in pre-market activity, but we need to look at the charts to see if longer-term patterns are shifting or going to remain in force.

In this daily bar chart of AN, below, we can see that prices made a high back in November and turned lower into the middle of March. Prices bounced in the back end of March and then made a quick retest of the low in early April. AN rallied from early April to the end of month and has retraced about half of its decline. To push higher from here the bulls need to gain the upper hand. Prices are above the still-declining 50-day moving average line and below the declining 200-day moving average line. Trading volume increased modestly in March and early April but did not reach what I would expect to represent capitulation-selling levels.
The daily On-Balance-Volume (OBV) line did not decline from November when prices began their decline, and now the OBV line is at a new high for the move up. This kind of movement suggests that buyers of AN have been more aggressive as prices weakened. The trend-following Moving Average Convergence Divergence (MACD) oscillator recently crossed to the upside for an outright go long signal.

In this weekly bar chart of AN, below, we used five years of price data. The pattern of lower lows and lower highs (the simple definition of a downtrend) has been in force for a long time and this current rally on the daily chart has not broken that trend. Prices are below the declining 40-week moving average line. The weekly OBV line shows a decline from early 2018, but that decline may be ending. The MACD oscillator is poised for an upside crossover and cover shorts buy signal.

In this daily Point and Figure chart of AN, below, the charting software is projecting a potential upside price target in the $60 area. 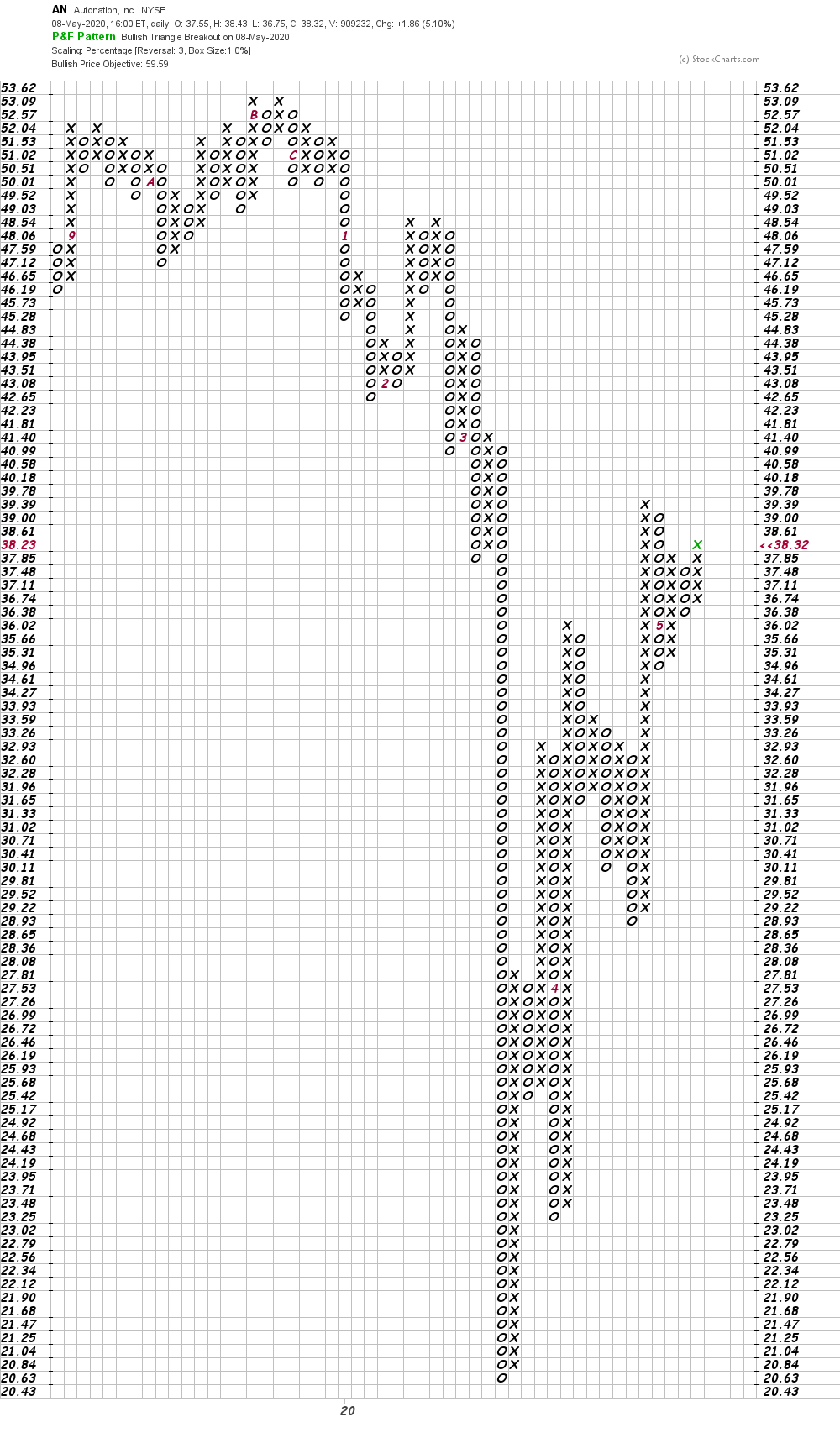 Bottom line strategy: In the short run it looks like AN can trade higher while the longer-term trend is still bearish. Short-term traders could go long AN with a stop below $34,  looking for a rally to the $46-$48 area even though the Point and Figure chart suggests more strength.
Get an email alert each time I write an article for Real Money. Click the "+Follow" next to my byline to this article.
TAGS: Earnings | Investing | Stocks | Technical Analysis | Automotive | Retail | Real Money | Consumer Discretionary