In his first Executive Decision segment of "Mad Money" Monday, Jim Cramer spoke with Mark Clouse, president and CEO of Campbell Soup Co. (CPB) , the packaged foods maker with a lot of growth since the pandemic began.

Clouse said while the recovery has begun in some parts of the country, the behaviors learned over the past few months are likely to stay with us for a long time. Many families are rediscovering quick-scratch cooking, Clouse said, where just a few quality ingredients, such as soup, can make a great meal. In-home lunch consumption will also continue to be strong.

Snacking is another area where Campbell excels.

Cramer said Campbell is not the same company it was years ago, and it is doing many things right. Let's check and see if the charts are doing things right.

In this daily bar chart of CPB, below, we can see that prices have been in an uptrend the past 12 months. The price action in March was different from the movement of the broad market averages. Here we can see some rapid up-and-down swings when most stocks were just plunging. CPB finally made a low in late March before resuming its upward movement.

Trading volume was busier than normal or average in March, but the math-driven On-Balance-Volume (OBV) line actually moved up in the month, telling us that buyers were more aggressive. The OBV line continued to rise into May but shows a little softness in recent days. The trend-following Moving Average Convergence Divergence (MACD) oscillator has crossed above and below the zero line several times since December and is currently below the zero line in a sell mode.

In this weekly bar chart of CPB, below, we can see that prices are in an uptrend from late 2018 and there is a positive slope to the 40-week moving average line. CPB has been testing the 40-week line for several weeks. The weekly OBV line shows weakness from February. The MACD oscillator has been weakening since October and is still pointed down toward the zero line.

In this daily Point and Figure chart of CPB, below, we can see that the software has been reading the price action as accumulation (buying) and has projected a potential upside price target of $67. A trade at $45 is likely to weaken this chart. 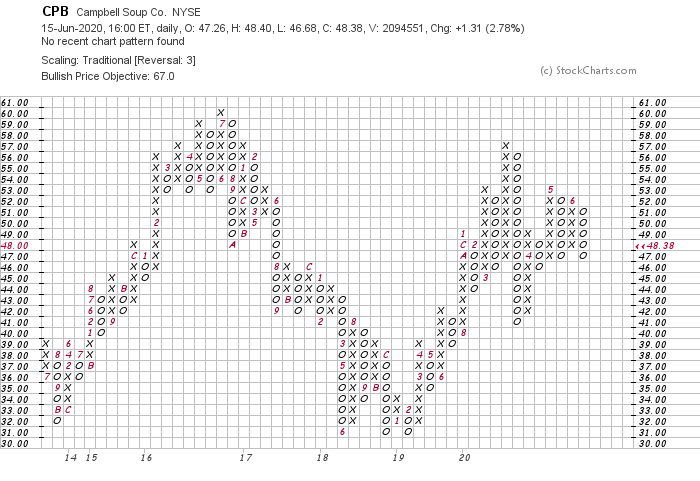 Bottom line strategy: I don't know if investors are losing their appetite for food stocks, but there are some technical question marks about CPB right now. The movement of the OBV line on the daily and the weekly chart is not what I like to see and the MACD oscillator tells a similar story. We might only see CPB trade sideways from here, but with the broad market so strong that leaves us with a dividend and not much in the way of capital gains.

Get an email alert each time I write an article for Real Money. Click the "+Follow" next to my byline to this article.
TAGS: Investing | Stocks | Technical Analysis | Consumer | Food & Staples Retail | Mad Money | Executive Interview | Real Money