Investors worried about an economic slowdown shouldn't just sell everything and walk away, Jim Cramer told viewers during Friday's Mad Money program. Instead, they should look for defensive stocks that have catalysts for growth, even without a strong economy. One such stock is Campbell Soup Co. (CPB) , which has risen 24% over the past six months as the company turns itself around.

Campbell is getting its house in order, Cramer explained, with the help of an activist investor. The company is aggressively cutting costs and paying down its $9 billion in debt by selling non-core international brands while simultaneously doubling-down on its winning domestic brands.

The On-Balance-Volume (OBV) line has been rising all year and confirms the price gains. The Moving Average Convergence Divergence (MACD) oscillator turned higher last July and is pointed up in a bullish configuration.

In the weekly bar chart of CPB, below, we can see the saucer-like bottom pattern that has been hammered out the past 12 months or so. Prices are above the rising 40-week moving average line.

The weekly OBV line is still in a longer downtrend from last August but it has begun to improve. The MACD oscillator is bullish.

In this weekly Point and Figure chart of CPB, below, we can see a potential upside price target of $58 being projected. 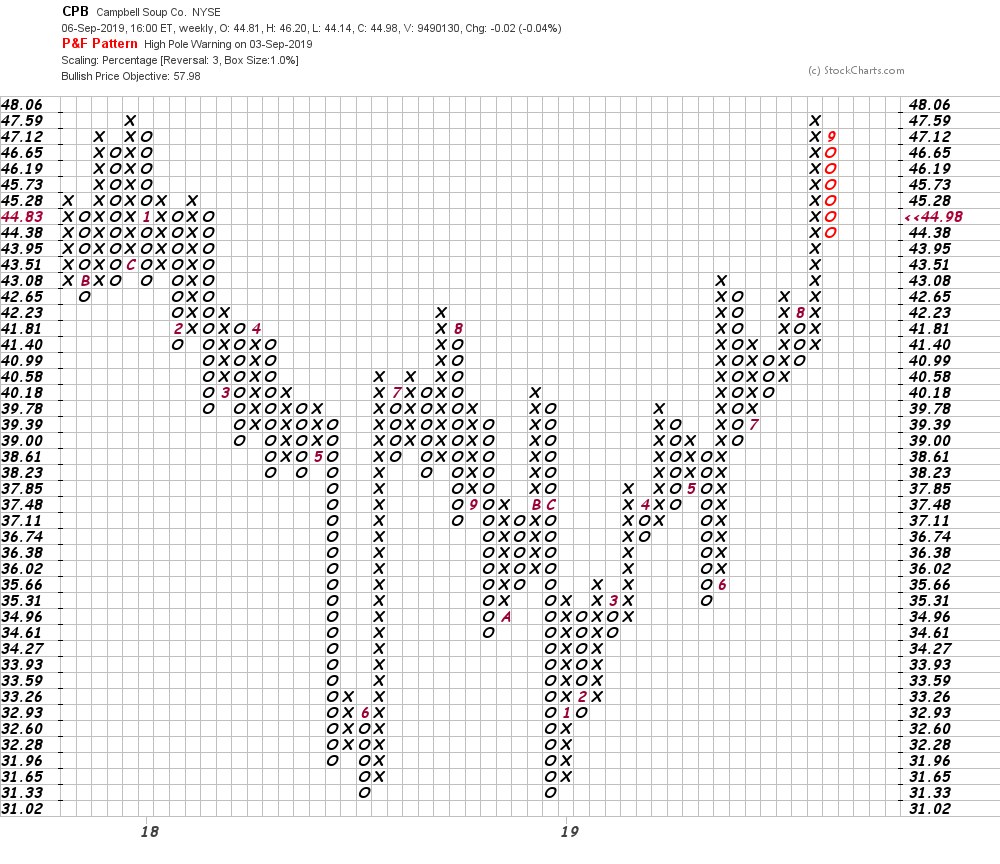 Bottom-line strategy: Continue to approach CPB from the long side. After the sharp upside spike of a few days ago we are likely to see CPB trade sideways for a while before resuming the uptrend. Risk below $40 looking for our $58 price target by year end.

Get an email alert each time I write an article for Real Money. Click the "+Follow" next to my byline to this article.
TAGS: Investing | Stocks | Technical Analysis | Food & Staples Retail | Food & Drink | Mad Money