When you find a powerful secular trend that's working, you need to stick with it, Jim Cramer told viewers of his Mad Money program recently. In this case, that means the stocks of Acushnet Holdings (GOLF) and Callaway Golf (ELY) .

Cramer recommended both earlier this year, and now he says the only thing he got wrong was which company would perform better. Cramer's top pick had been Acushnet, makers of Titlist golf balls and other golf equipment under the Scotty Cameron brand.

The company reported disappointing earnings in both May and August, but fortunately, it didn't seem to matter and the stock continued to surge higher. With both the weather and production issues turning in the company's favor, Cramer expects the strength to continue.

Meanwhile, Callaway has been the surprise winner of the two. It delivered strong earnings in May and August, while activist investor Jana Partners built up a stake in the firm and began pushing for even better execution at the company. Callaway also owns an interest in the high-tech TopGolf franchise, which could come public soon.

In this daily bar chart of ELY, we can see that prices made a low in December and a retest (or "double bottom") in May. Prices have been stair-stepping higher since then and are now above both the stock's rising 50-day moving average line (the yellow line below) and its 200-DMA line (the blue line):

You can also see that a bullish "golden cross" of the 50- and 200-day lines formed in early August. Additionally, ELY's daily On-Balance-Volume line (OBV) has been improving since late June, while its rising OBV line tells us that buyers have been more aggressive. You only want to be an aggressive buyer when prices are rising.

Meanwhile, the stock's trend-following Moving Average Convergence Divergence oscillator (MACD) is above the zero line and just turned to the upside for a fresh outright "Go Long" signal.

Callaway's weekly bar chart shows a bullish set-up as well, with prices above a rising 40-week moving-average line (in yellow below):

The weekly OBV line has also been improving since May, while the MACD oscillator crossed above the zero line in August for a new "Buy" signal.

Lastly, this point-and-figure chart shows Callaway with an uptrend with a potential upside price target in the $24-$25 area: 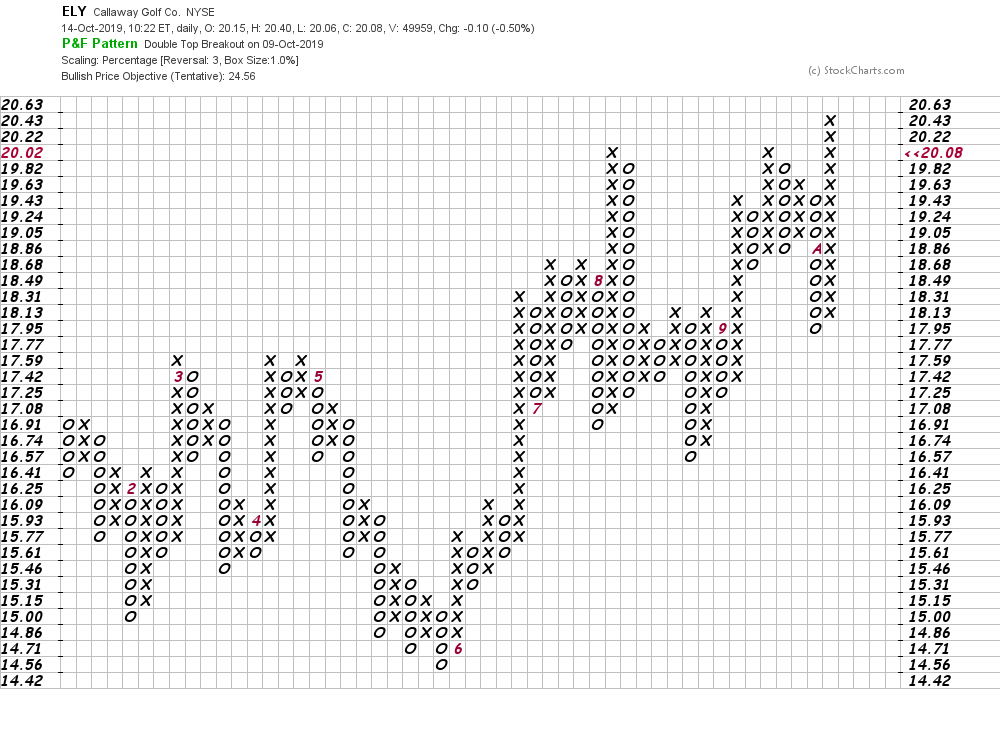 Add it all up and traders could go long ELY around $20 and risk below $19. You'd be looking for gains to the mid- to upper-$20s in the months ahead.

Get an email alert each time I write an article for Real Money. Click the "+Follow" next to my byline to this article.
TAGS: Investing | Stocks | Technical Analysis | Mad Money | Sports