In his first Executive Decision segment of Tuesday's "Mad Money" program, host Jim Cramer spoke with Chip Brewer, president and CEO of Callaway Golf  (ELY) on the heels of its annual investor day.

Brewer raved about Top Golf, the company's digital driving range that he said is the leader in "modern golf experiences." He called Top Golf "beyond exciting," and something that appeals to more than just traditional golfers. Callaway currently operates 81 Top Golf locations and has plans to open 11 locations a year.

Brewer said the company is still a leader in golf equipment and apparel. Brands such as Jack Wolfskin may not be household names in the U.S., Brewer said, but the brands are huge overseas.

Cramer said there's more than meets the eye at Callaway and a lot to like.

Let's check and see what meets the eye when it comes to ElY's charts.

In this daily bar chart of ELY, below, we can see that prices have been in a downward trend since June. Prices trade below the declining 50-day moving average line and the declining 200-day line. Trading volume looks like it has increased slightly in the past three months. The On-Balance-Volume (OBV) line has declined the past year but it may be bottoming in the past two months, or at least we are seeing a balance between aggressive selling and aggressive buying. The Moving Average Convergence Divergence (MACD) oscillator has improved since February but still remains below the zero line.

In this weekly Japanese candlestick chart of ELY, below, we can see that prices are in a longer-term downtrend as they trade below the negatively sloped 40-week moving average line. There are a number of upper shadows visible in recent weeks, telling us that traders are rejecting the highs. The weekly OBV line is more bearish than the daily line and so is the MACD oscillator.

In this daily Point and Figure  chart of ELY, below, we can see a potential upside price target in the $28 area. 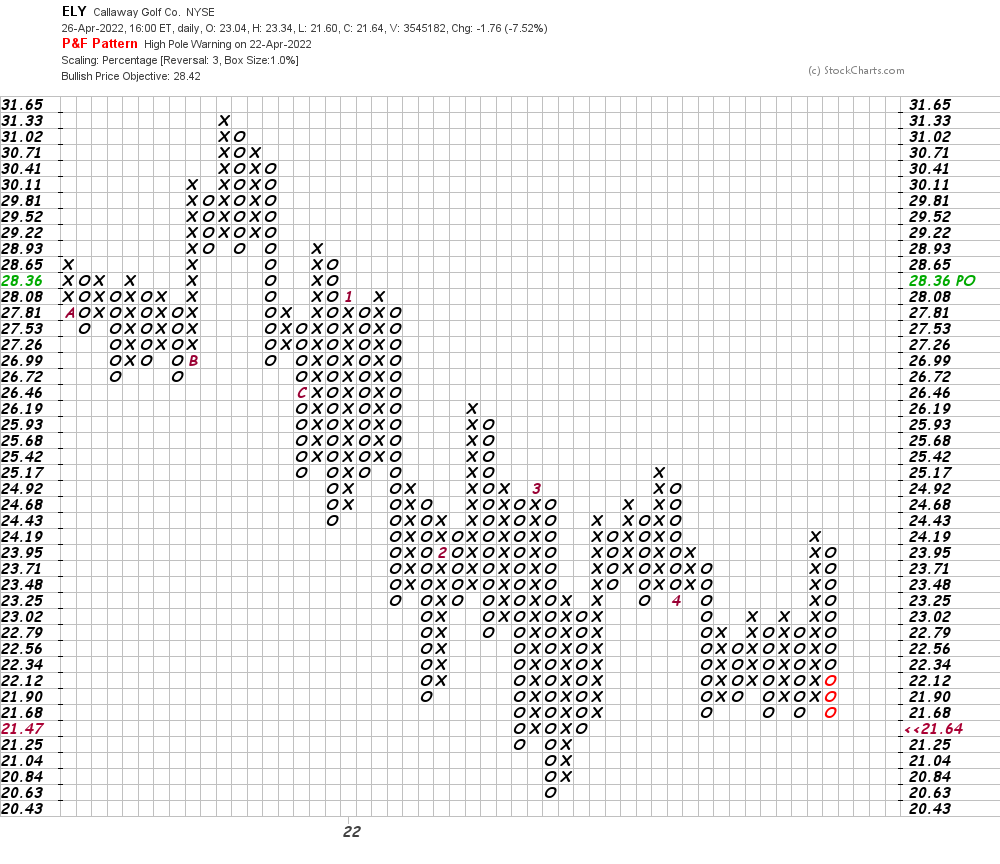 In this weekly Point and Figure chart of ELY, below, we see a $33 price objective.

Bottom line strategy: These four charts of ELY (above) are mixed, but the trend remains down for now. Tiger Woods is trying to make a comeback and ELY may, too, but I would wait for a good base pattern for now before recommending a purchase of Callaway shares.

Get an email alert each time I write an article for Real Money. Click the "+Follow" next to my byline to this article.
TAGS: Investing | Stocks | Technical Analysis | Consumer | Sports business | Real Money | Consumer Discretionary | Sports