We used to call them Eagle Drivers. They, like all fighter pilots, could be cocky, maybe even arrogant.

Unlike other fighter pilots, though, these fellows flew the McDonnell Douglas (now part of Boeing) F-15 Eagle, at the time, the most advanced fighter craft on the planet. Not that I know much about military aviation, other than speeding down a rope dangling from a Huey. That said, I had befriended, and gotten to know one Eagle Driver, and they were different.

Flash forward, that friend who I remain in close contact with, and I are men in our mid-50s. Boeing (BA) , after a continuous string of troubling headlines, may just have to rely upon the F-15, an aircraft that in one variant or another has been in service since 1976. Gerald Ford was President of the United States. Ford would have celebrated his 106th birthday this summer.

We all know that Boeing's 737 MAX has been grounded, globally. Concerns are that perhaps the Maneuvering Characteristics Augmentation System may possibly be central to deadly crashes last October and in March. I do not opine on such matters. I just try to figure out when to buy, when to sell, and how to hedge.

What we do know is that there are questions pertaining to the oversight of how these new civilian airliners have been certified. We also know that exactly zero new 737 MAX aircraft were ordered in March. Boeing did deliver 11 of these planes prior to the suspension of the fleet.

Boeing is cutting production to 42 737 MAX aircraft per month from 52. that was announced last week.

What does this do for first quarter earnings set for April 24?

What does this do to estimates not just for the quarter, but for the year?

When will the suspension be lifted?

Goldman Sachs expects that there may be no deliveries at all throughout the second quarter, though in the same report they do expect Boeing to catch up in the second half of 2019. Goldman cut its price target to $393 from $425.

J.P. Morgan, while remaining positive on the name at "Overweight" did reduce its price target on Wednesday.

Why did I lead the article with a memory of my old Blue Falcon friend?

It recently became known that the KC-46 tanker aircraft order by the Air Force has cost Boeing $3.5 billion in charges for cost overruns, while also running two years behind schedule. Not to mention that service members have complained that the planes that have been delivered have been showing up with debris in the aircraft left behind by workers. This is the second time that the Air Force has had to ask Boeing to clean these tankers prior to delivery.

This leaves fighter aircraft as a revenue provider in the meantime. The F/A-18 Hornet, and the F-15X.

Why does the Air Force still consider this older craft viable in the era of lighter, stealthier fighters such as the F-35 (Lockheed Martin (LMT) )? Armament.

The F-15 can carry a far greater payload than modern craft, and in the theater of modern aerial combat, faster, lighter, stealthier craft might be useful as "forward observers" targeting enemies for the deadlier craft that might be farther away. This could be a development useful in the field of hypersonic weaponry.

The Air Force is considering ordering 18 F-15s a year up until 2024. This may be a feather in Boeing's cap when they need one. But does that make the stock worth the investment? 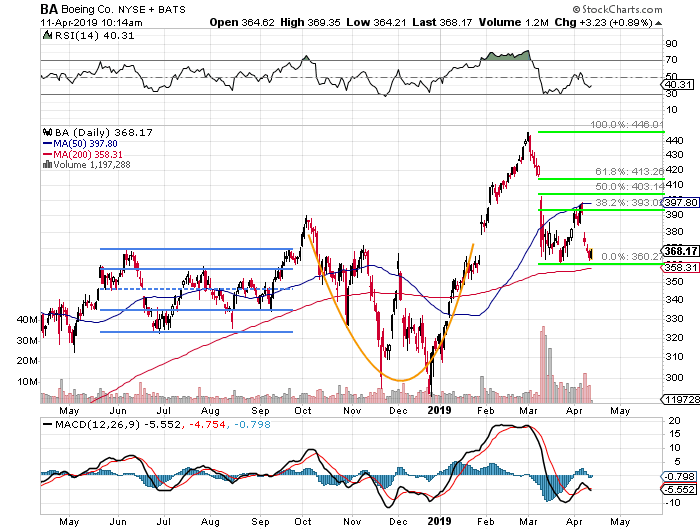 Interesting. Interesting that the flat base in blue, above, produced the orange cup that failed in turn to produce a handle. Interesting that after that, the shares have found support twice above the 200-day simple moving average, but stiff resistance at the 50-day SMA.

Yes, I am aware that the shares are acting well Thursday. My thoughts are that not only should BA shares not be bought until positive momentum is evident, but that the $358 level is incredibly crucial.

If the stock cannot put together a pattern that looks something like what I highlighted in blue on the left in the chart, the threat then becomes resistance at the 200-day SMA, not support.

I would not risk capital on this stock right now.

A Trader Could... (Minimal Lots)

If long, the trader might be committed to purchasing the shares back at $355, but at least will have extracted some dough. Should BA rally from here and through earnings, the trader loses the net debit.

Get an email alert each time I write an article for Real Money. Click the "+Follow" next to my byline to this article.
TAGS: Investing | Stocks | Technical Analysis | Trading | Aerospace | U.S. Equity