A trip to one of our local grocery stores Wednesday revealed something very interesting. I was curious whether the locals were yet in grocery-buying panic mode. There was obviously a run on chicken, bottled water and Gatorade, but overall the store was not too bad.

That was until I got into the dairy aisle. There was plenty of milk, but the entire butter case was empty, and it's a huge space. My question is, "What the heck are people doing with all that butter?" 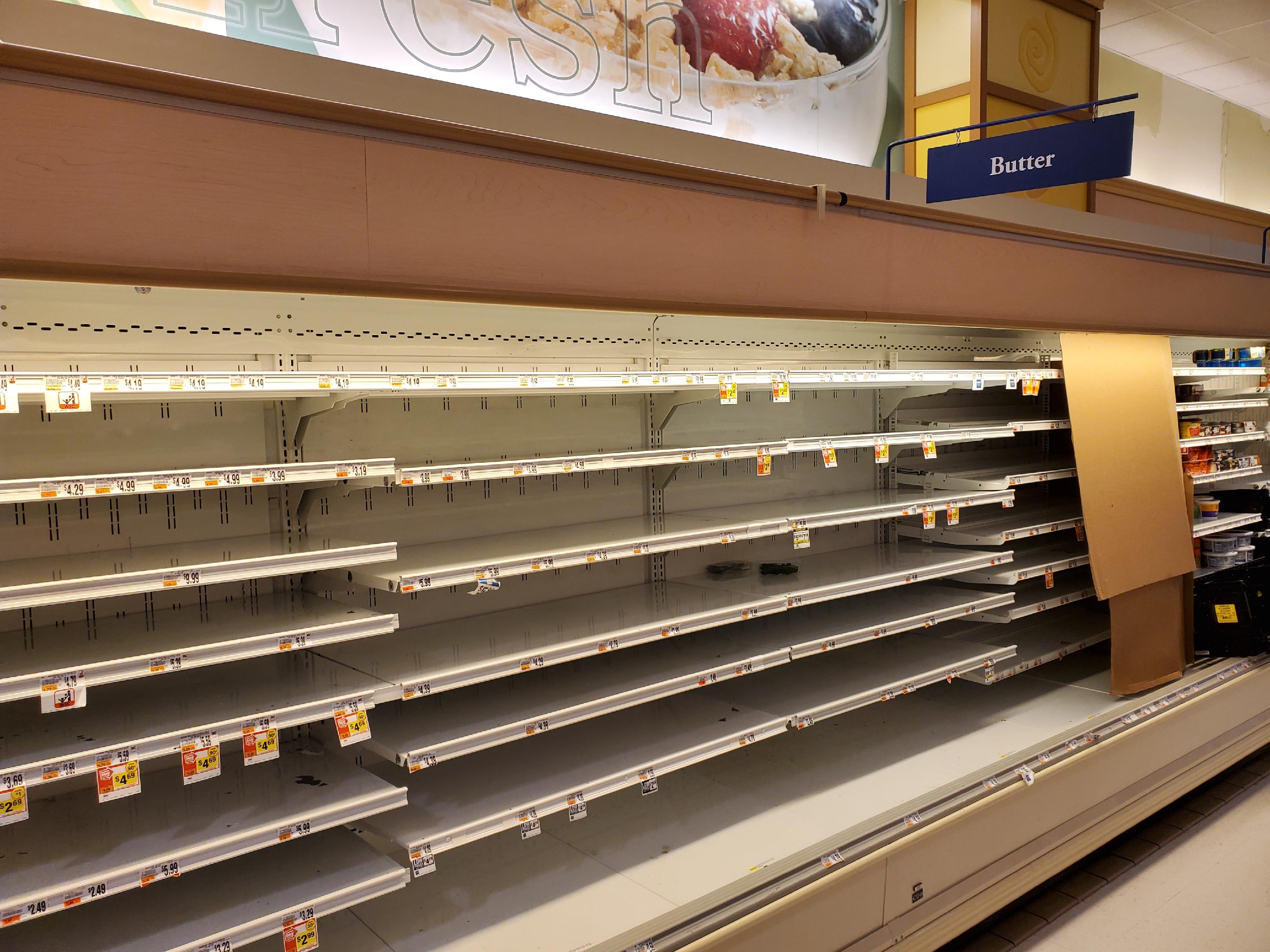 Thursday was obviously brutal for the markets, with the S&P 500 dropping 9.5% to 2480. Perhaps surprisingly in light of all the references I've heard to 1987, 2000 and 2008, the S&P 500 was 5% below Thursday's close in December 2018, when it hit 2351 on Christmas Eve. That's just 15 months ago. That's likely of little comfort to investors who don't know what's coming next, but we need a little perspective these days as life as we knew it has been cancelled until further notice.

After seeing a tweet from our own Jim Cramer that he had done a little buying on Thursday, my son asked me that night whether I'd done the same. While I was very tempted to pull the trigger on a couple names, I resisted that temptation, at least temporarily. The names that had me tempted are among those most hated by the markets at this point. Their longer-term prospects remain bright in my view, but just when you think they can't get any cheaper they get pounded further.

Still, I could not believe my eyes seeing Applebee's and IHOP parent Dine Brands Global (DIN) down 32% on Thursday to a 10-year low, pushing the yield to 8.7%. There still has not been much movement on 2020 estimates, although they should come down from the current $7.23 a share.

If darn near everything is cancelled, I'm not sure what the appetite will be for consumers eating outside the home until the fear subsides. However, I can't imagine that it will impact 2021, and consensus estimates of $7.67 a share put the forward price-to-earnings ratio at 4.5. One of the issues for DIN is debt, to the tune of $1.4 billion. While not a ridiculous debt load it does make Dine Brands a bit riskier, especially if the current situation is more drawn out.

I was also tempted by a name I've mentioned all too frequently in recent columns, Royal Caribbean Cruises (RCL) , which was off 32% to $30. It now yields 10.3% and trades for less than 3x next year's consensus estimates, though that is bound to be cut. Royal Caribbean demonstrates the issues with trying to find a bottom in a name. This was a $135 stock in mid-January, so it was clearly a "bargain" when it closed at $95 on Feb. 24 and an even bigger bargain at $65 on March 5. Four days later it was $44, then $30 on Thursday.

While a solidly profitable name with a 17.2% net profit margin in 2019, Royal Caribbean also has considerable debt at $10.7 billion. If you want to earn those margins, pay that debt and return capital to shareholders in the form of a dividend, you've got to fill the ships and entice passengers to pay up for all the extras.  If consumers are afraid to cruise and you can't fill the ships, all bets are off, and margins and valuations will suffer.

Royal Caribbean is now offering passengers the ability to cancel a cruise up to 48 hours prior to sailing through July of this year and they can receive a credit that can be applied to a cruise through 2021. If there are not enough takers it will affect revenue. Maybe at some point it affects the dividend, but it's too early to tell.

I am still waiting to pounce on it, and am reminded that during the worst of the worst Royal Caribbean bottomed at about $5.50 a share in 2009. Folks were afraid to cruise back then because of economics. They may be afraid now due to infection, which might be a bigger motivator. However, we have no plans to cancel our May cruise; if that ship is sailing, God willing, we'll be on it.

I went back to that same local grocery store Thursday night not to buy, but to observe. The checkout lines were as long as I'd ever seen them. Meat and chicken were getting sparse, bottled water was all but gone. The butter shelves were still empty, leading back to the obvious question: What the heck are people doing with all that butter?

Get an email alert each time I write an article for Real Money. Click the "+Follow" next to my byline to this article.
TAGS: Fundamental Analysis | Investing | Stocks | Value Investing | Consumer | Restaurants | Transportation | Real Money | Consumer Discretionary