By TIMOTHY COLLINS Aug 29, 2019 | 12:46 PM EDT
Stocks quotes in this article: DG, DLTR, WSM, OLLI, BURL
Retail polarization continues.
Dollar General ( DG) beats and skyrockets. Dollar Tree ( DLTR) disappoints and can't go anywhere. Williams-Sonoma ( WSM) and Ollie's ( OLLI) Bargain Outlet Holdings are both having rough days on the market after Ollie whiffed on expectations, while Williams-Sonoma produced solid results and guidance.
On one hand, we have two companies competing in the exact same space producing opposing results. On the other hand, we see very different results from very different retail companies, but the stock reactions are similar.
If this were the only information you had, and I asked you how you think Burlington Stores ( BURL) was performing after posting earnings of $1.36 per share, 22 cents ahead of expectations, on $1.66 billion in revenue, you might throw you hands up. If I added the fact comp store sales of 3.8% landed well ahead of expectations and full-year guidance was raised basically the same amount as the second-quarter beat, you probably would lean bullish. And you'd be right, although you might have been hard-pressed to predict the stock jumping 16.5% on Thursday.
All right, I know that's not a completely fair scenario, since Burlington released additional information, and for the most part, it was good news. Comp inventory dropped 7.5%, so the company is well-positioned to pursue new fashion trends if the opportunity warrants. Total sales increased 10.5% and the momentum should continue in the third quarter as management predicts an 8.5% to 9.5% gain.
The full-year guidance increase may not be as bullish as it seems in the headlines. The company increased its range from the first quarter guidance of $6.93-$7.01 to a new range of $7.14-$7.22. That means they bumped both the lower-end and upper-end by 21 cents  after beating the second quarter by 22 cents.
During the second quarter, Burlington repurchased over 300,000 shares at an average cost of $169.58. With shares trading around $200, that's a cool $10 million gain; theoretically speaking. The board of directors authorized an additional $400 million repurchase through August 2021 in addition to the remaining $124 million on the current buyback authorization. That equates to a little more than 4% of the company, or .5% per quarter over the next two years. It may not be a dividend, but it's not a terrible "yield" for investors. 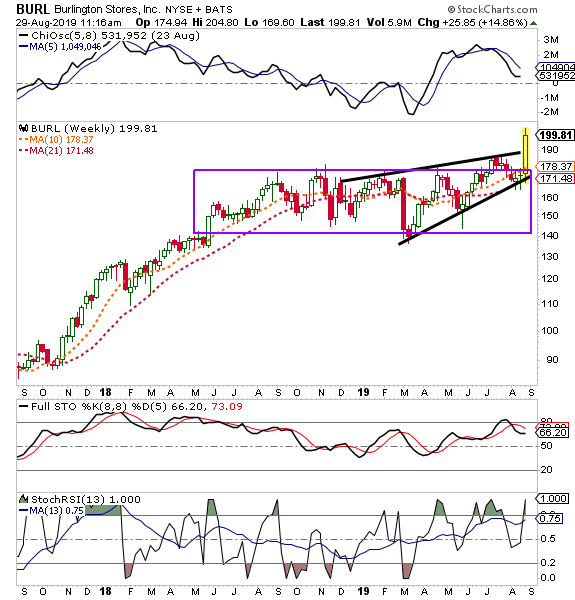 The breakout potential on Burlington's weekly chart is big here. After a wide-trading range of $140 to $180 over the past 15 months, bulls finally muster the breakout they failed to hold two months ago. If I were long, I'd use $190 or $180 as my stop. If I were a seller of bullish put spreads, I'd likely use the $190 as my short leg and $180 or $170 as my long leg.
In terms of post-earnings action, Burlington tends to not do much over the next two to three weeks. Historically, it has seen more continuation action than fades, although both have occurred. Unfortunately, the options market is thin with very wide bid-ask spreads, so my view for longs is to use an alert on the price action and simply ride the current trend.
(Burlington is a holding in Jim Cramer's Action Alerts PLUS member club. Want to be alerted before Jim Cramer buys or sells BURL? Learn more now.)
Get an email alert each time I write an article for Real Money. Click the "+Follow" next to my byline to this article.
TAGS: Investing | Options | Stocks | Retail | Stock of the Day