Well that did it.

After seeing the majority vote in my Saturday Twitter poll that the next 100 points in the S&P would be up, it felt as though there wasn't a bull to be found on Monday.

The results are in and folks are bulled up!
Thank you so much for participating! pic.twitter.com/w7NE8y84Zb

As I watched CNBC Monday afternoon, I was struck that no one seemed bullish anymore. And it wasn't the usual parade of bears the network might have on during a downdraft. This was guest after guest sounding cautious.

Now were these folks more bullish a week ago when the market was lifting? I don't know. Some of them were, for sure. Was it that they finally took Apple (AAPL) down a few points? Or maybe it was the semiconductors, which are looking a bit toppy?

It wasn't like the Bank Index has been a shining light in this market, right?

And the meme stocks? Oh my. Yes, they peaked around last spring, but now they are being taken to the woodshed. If that wasn't enough bitcoin, that other area of speculation in the market, has been in the dumps lately, as well.

No, about the only thing you could hang your hat on was the old stodgy utilities. I warmed up to the utilities a few months ago (around $875). They made me nervous several times since, but here they are testing their all-time highs.

Maybe it was that all those stocks no one owns like the foods, the soaps, the tobacco and toilet paper names acted like tech stocks for a day or two? No one likes when those stocks move. Or the drugs. Nope, no one likes it when defensive names are where all the upside action is in the market.

Yet, that is where we find ourselves.

The speculative peak in this market was nearly a year ago, when we had the biotechs peak, when we had the special purpose acquisition company craze, when we saw bitcoin tag $60,000 for the first time, when we had the Gamestop (GME) nonsense, when the ARK Innovation ETF (ARKK) was the talk of the town, because it was going up, when Nasdaq saw over 700 stocks make new highs.

We haven't seen that sort of mania since. And let's face it, most of the hot stocks from then haven't seen those highs again, or if they have, it's been a visit back up there and that was it.

Now we have a lot of those former fan faves at new lows. Look at Roku  (ROKU) . It peaked in February what I call the speculative peak in the market, revisited that peak last summer, and yet has more than halved since then. I have a pile of stocks that look similar. That's why Nasdaq had more than 700 new lows just over a week ago.

Clearly something has turned folks so sour on the market. I had thought the 10-day moving average of the put/call ratio would peak and turn down last week but instead of doing that it has nosed itself upward through the fall peak and is now the highest it has been since April 2020, when it was falling from a much higher peak. That is how I know folks are bearish. 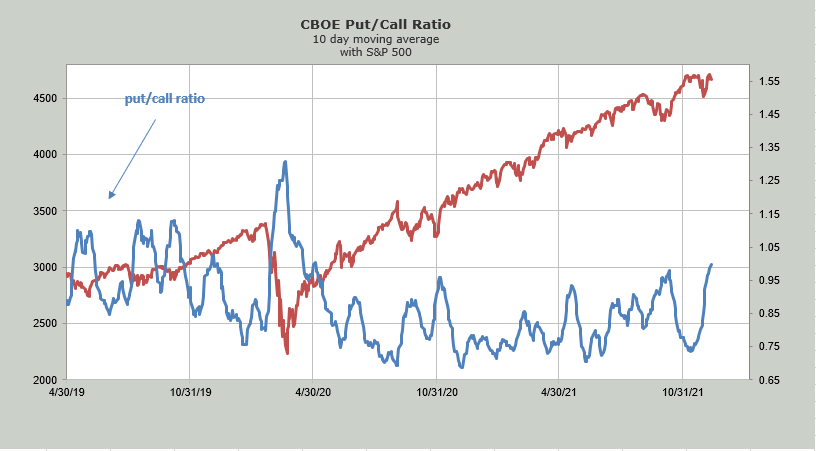 Perhaps a rally in the next few days (yes I still think we can get one) would flip folks back to bullish or is it that they are finally feeling that big divergence between breadth and the S&P and are no longer interested as we head into year end?