Foulkes said that Brunswick's biggest challenge continues to be inventory. He said they have about half as many boats in the pipeline as they usually would this time of year. Even if they ran at maximum capacity, they still would only be at two-thirds of normal levels by year-end.

Foulkes added the orders are still strong, despite the longer-than-normal wait times. They continue to see strong demand, even in colder, Northern climates.

When asked about changing demographics, Foulkes said that Brunswick increasingly sells boats to the middle class. 80% of the boats they sell are now less than $50,000, he said, and quality and reliability are up, which makes a boat more of a family asset and less of a maintenance nightmare.

Let's check out the charts of BC to see if they are a dream or a nightmare.

We last looked at BC on July 29 writing that, "Continue to hold longs recommended last month. Raise stop protection to a close below $65. The $89 area is our new price target. Enjoy the ride." Unfortunately the ride stopped short.

In the daily bar chart of BC, below, we can see that our recommended longs would have been stopped out in early August. Should we get back in the boat?

Then shares are trading above the 50-day moving average line but its slope is negative. The On-Balance-Volume (OBV) has been weak since late July and still does not look like it has bottomed. A declining OBV line tells us that sellers of BC are more aggressive with heavier volume being traded on days when BC has closed lower.

In the weekly bar chart of BC, below, we can see a mixed picture. Prices are trading above the rising 40-week moving average line but the trend has been sideways for several months. The weekly OBV line shows a decline from July to September but only a limited recovery since the middle of September. Hard to say if this "turn" will last.
The MACD oscillator is in a take profits mode.

In this daily Point and Figure chart of BC, below, we can see a potential upside price target in the $82 area but the chart needs an upside breakout at $68.77. 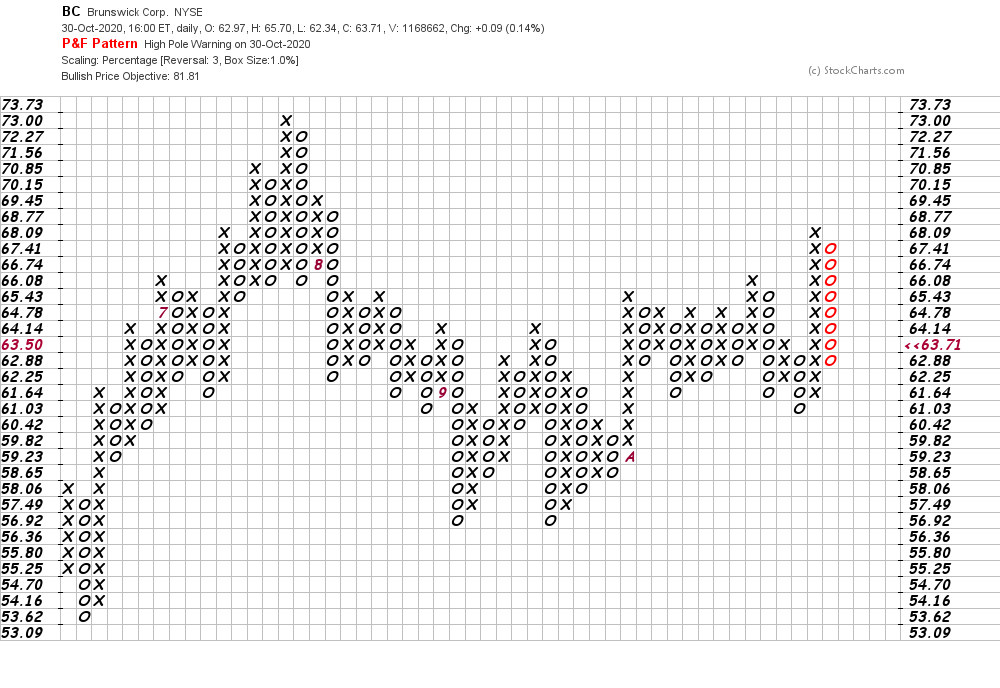 Bottom-line strategy: The charts of BC are not compelling right now. It may be better to stay in a safe harbor for a while longer.
Get an email alert each time I write an article for Real Money. Click the "+Follow" next to my byline to this article.
TAGS: Investing | Stocks | Technical Analysis | Mad Money | Executive Interview | Consumer Discretionary | Sports