That's what I call Broadcom (AVGO) . The firm sure is that. While my focus across the semiconductor space has long been focused upon the likes of Nvidia (NVDA) , Advanced Micro Devices (AMD) and until recently Marvell Technology (MRVL) , I have always followed this name from a distance, never venturing more than a short-term trade as complex or misunderstood at the time acquisitions (such as Computer Associates and Symantec). Avago, I mean Broadcom, reported the firm's fiscal third quarter on Thursday night. The results were solid, but the timing obviously poor. Let's explore.

For their third quarter, Broadcom reported adjusted EPS of $5.40, which was better than expected, on revenue of $5.82 billion. Sales amounted to year over year growth of 5.4%, and were good enough for a beat. The big story was in cash flow across the board. Cash flow from operations increased 31% to $3.178 billion, while free cash flow popped similarly (+33%) to $3.073 billion. The Street was looking for just about $2.25 billion. This line is one of the first things investors look at when considering this stock, because this is a dividend name. This line is reassuring.

On that note, Broadcom declared a quarterly dividend last night of $3.25, in line with what the firm had paid shareholders earlier this year. This particular payment will be on its way this September 30, to shareholders of record September 22. At the last sale, Broadcom yields 3.69%.

Breaking down the performance across business units, Semiconductor Solutions printed in decline (-4% y/y, -6.5% q/q), but this was expected. Revenue for this business of $4.219 billion did beat (by a smidge) the $4.166 billion that the community of analysts was looking for. The growth, at least year over year (+41%) was in Infrastructure Software, despite a sequential decline to $1.602 billion, just on the north side of consensus.

Not a headline maker, but important: The firm ended the quarter with cash and equivalents of $8.857 billion, which is down from $9.207 billion three months ago. That said, the firm reduced its total debt load by $1.9 billion during the quarter and plans to pay down another $3 billion during this current quarter.

For the firm's fourth quarter, Broadcom now guides revenue to between $6.25 billion and $6.55 billion. The Street had estimated $6.2 billion. The firm looks forward to a rough 50% increase in wireless, which could go hand in hand with a 20% increase in broadband. The firm expects to see weakness in enterprise. EBITDA is expected to land close to $3.74 billion, suggesting an implied adjusted EPS of something close to $6.24 versus the number in the $5.80s that most of the Street is looking for. 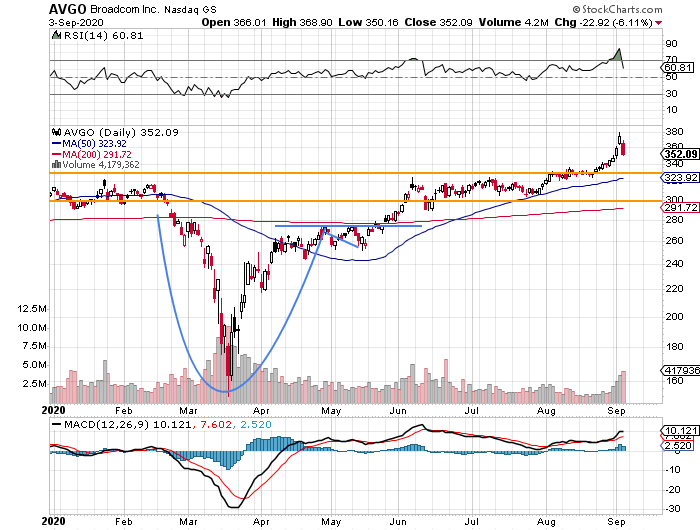 Unfortunately, AVGO has already enjoyed both the breakout created by the cup-with-handle pattern earlier this year, as well as the one created by the basing pattern this summer with a pivot of roughly $329. Had I been long this name, I probably would have had a price target of roughly $390 on the shares. Do I initiate here? I don't think so.

I think I will add to Nvidia (NVDA) and Advanced Micro Devices (AMD) earlier than I initiate AVGO. This is a solid name, don't get me wrong. Hock Tan is an innovative and aggressive CEO. I am shopping for a third chip play, now that I am out of MRVL and have created the cash position to do so. But I would rather see what this one does around that former pivot before pulling triggers. If I can get paid a few bucks to write $330 puts out a week or two, that may be the road I travel -- at least in this environment.

Get an email alert each time I write an article for Real Money. Click the "+Follow" next to my byline to this article.
TAGS: Earnings | Investing | Markets | Put Call | Stocks | Technical Analysis | Semiconductors & Semiconductor Equipment | U.S. Equity