Broadcom (AVGO) has become a bit of a snoozer.

Someone has to say it.

My stance has been this: the company is focused on free cash flow, essentially annuitizing itself. That's what the company's recent purchases have had in common.

You read through analysts reactions and you'll find notes touting the attractiveness of the company's focus on returning 50% of its free cash flow to investors. Hello? Annuity anyone?

I'm not saying this is a bad thing, but we need to recognize it for what it is. Look at the headlines from the company: Free cash flow grew to $2.3 billion, up 8% year over year while the company repurchased 3.5 million shares for $977 million ($279.14 per share) and declared a dividend of $2.65. Revenue rose 9% year over year as well.

With a market cap near $120 billion, buying back roughly $1 billion in stock per quarter adds a nice kicker to Broadcom's $2.65 quarterly dividend. That equates to around 7% annually, in line with goals I discussed in prior Broadcom articles.

This isn't a growth stock any longer, so I don't know why folks discuss it like it is. Expect the company to continue acquisitions, likely more on the infrastructure side, as it continues to balance out that portion of the business against semiconductors.

Cash flow. It's all about consistent cash flow.

Some may be optimistic about a turn in semiconductor sales thanks to the new iPhones, but IoT is where the growth stands in the industry. I don't believe the new iPhone will spur much change in Broadcom, which is probably why we didn't see the company budge on full-year revenue guidance. Between lackluster iPhone new sales and the Huawei ban, the bottom may be in for the cycle, but we can stay bottomed for several quarters.

Ironically, the company's CA segment performed better than expected. If you recall, Wall Street recoiled at this acquisition yet it, along with the buyback, helped Broadcom's bottom-line beat expectations.

If one were to back out the 3.5 million shares bought back during the quarter, Broadcom's bottom line would have been closer to $5.12 per share, or a penny below expectations, not the $0.03 beat they reported at $5.16 per share. That helps explain how they could slightly miss (basically report in-line) on top-line revenue at $5.52 billion. 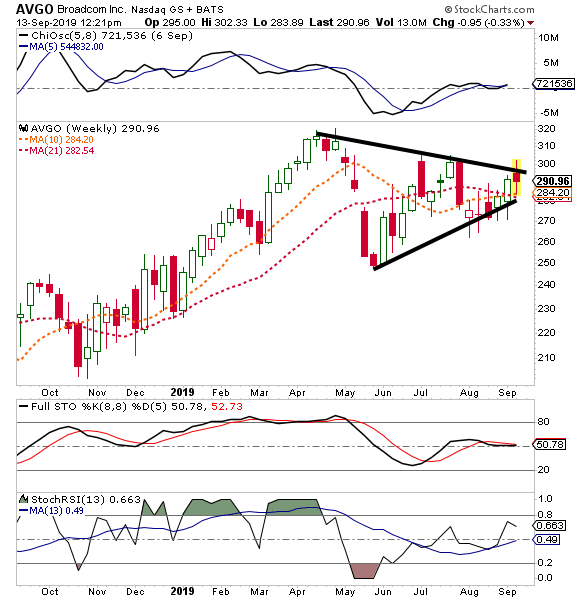 This may come across as me sounding bearish. I'm not. Broadcom is a terrific blend stock (growth/value/income). It should provide consistency and diversity. I expect it to outperform in a bearish market and underperform in a bullish one.

Overall, though, I anticipate a wide range of trade over the next six to 12 months as the market waits for storage and semiconductors to signal an actual turn.

Get an email alert each time I write an article for Real Money. Click the "+Follow" next to my byline to this article.
TAGS: Earnings | Investing | Markets | Stocks | Technical Analysis | Trading | Value Investing | Semiconductors & Semiconductor Equipment | Stock of the Day

Shopify Could Pull Back From Here: Take Some Profits

SHOP has made some incredible gains over the past few years.

This is one to avoid for now.

NetEase is the second Chinese company to launch a secondary listing in Hong Kong. It is unlikely to be the last.

It's a Stock Market Bubble

An unrelenting rise combined with wild small-cap speculation in a difficult economy has market players struggling to understand what's going on.