"Doubt is an uncomfortable condition, but certainty is a ridiculous one."

In the end, what any of us really has, is a best effort result based upon our own individual interpretation of probable outcome driven only by whatever input we permit. This is why smart people disagree on politics. For, we, the naked primate, the animal of reasoned thought, must remain just that. An animal forced to evolve just to keep up with an ever-changing environment. Even then, after effort, we are left with just the accidental result of biased opinion based on incomplete information.

Erroneous are those who lament what is this uneasy reality. Virtuous are they who meet each challenge cognizant of a persistent need to exercise a need to learn. Victorious are those who know that luck as much as talent has played a role in anything.

Patterns, colors, change. All brought about through the visual result of numerous reflections of light off of multiple surfaces creating symmetrical but often beautiful patterns. Real life is both input and output. Price discovery, the real kind, not the modern high-speed electronic kind, is much like economics itself, simply an aggregate human response to both natural and artificial conditions of both surplus and scarcity at a specific time and place.

From a market perspective, there was a lot to like about Tuesday. For one, the major indices not only closed at session highs -- they also closed either at or close enough to all-time highs depending on where one looks. Winners beat losers by a rough 3 to 1 at the New York Stock Exchange and by something close to 5 to 2 at the Nasdaq Market Site. All 11 S&P sectors closed higher, as advancing volume easily topped declining volume at both of these primary exchanges.

This rally was indeed broad. There was no rotation, but instead a renewed interest in what benefits the most when an economy grows. There was serious demand for energy, materials and financial stocks as the long end of the yield curve gave some ground. Even more interestingly, and this is cherry-picking, there was far more interest within the tech sector in hardware and semiconductors than there was in software. Oh, and the small-caps roared yet again. The Russell 2000 is now up 7% for December, twice the increase for the Nasdaq Composite. This, after the Russell 2000 ran more than 18% in November.

Why hope? Why forward-looking faith in what looks to be a troubled present?

After all, even as we assess this strong-looking day, we must ask hard questions in order to seek a version of truth close to what is. While breadth was decisively positive, aggregate trading volume tailed off just a bit from Monday to Tuesday at both the NYSE and the Nasdaq. Heck, aggregate trading volume across the entire S&P 500 constituency failed to reach its own 50-day simple moving average. This, honestly does not do much to unwind (or rewind) much of the professional distribution experienced across the S&P 500 over that four-day losing streak.

In addition, the Bank of America Fund Managers Survey now shows cash balances at its lowest reading (4%) since 2014. While this may or may not be an expression of confidence, once portfolios go black on ammo, there is no choice but to rotate in order to create winners. It is then, that a simple broadening of market strength such as we have seen through late autumn 2020 would not be possible.

According to the Johns Hopkins University website that we all have been following closely since the beginning of this pandemic, more than 198,000 new infections of the SARS-CoV-2 virus were confirmed on Tuesday. This was the third consecutive day under 200,000. Is that good? No, it is better, but still awful. The number of daily U.S. Covid-related deaths climbed back above 3,000 on Tuesday after spending two days below 2,000. Happy Thanksgiving.

On that note, the Pfizer (PFE) vaccine has entered early circulation, and Moderna (MRNA) is warming up to follow closely after some rather positive-looking data released ahead of this Thursday's advisory committee meeting.

On Tuesday, current Health and Human Services Secretary Alex Azar (who should probably be kept on past Jan. 20 as an advisor to his replacement) said, "Depending on the decisions made by our governors.... but I believe we'll have enough (vaccine) supply out there to be reaching out to the general public for administration at your CVS (CVS) , Walgreens (WBA) , Krogers (KR) ... by the end of February into March." That's really good news. Azar has been rather accurate in much of his assessment throughout.

This would be ahead of the timeline laid out just two weeks ago by Dr. Moncef Slaoui, who heads "Operation Warp Speed," when he was hopeful that one third of the U.S. population could be innoculated within three months. The hope would be that perhaps within that three-month window, that vaccines being developed by both Johnson & Johnson (JNJ) and AstraZeneca (AZN) might be added to the overall portfolio. This is why investors are buying small-caps and more economically sensitive sectors.

Then there is supposed progress being made on putting together some kind of fiscal aid package for the American people. No, the two sides have not decided to agree on anything that they currently disagree on, they just might agree to move forward on what they can move forward with, so maybe like... families don't starve. Nice job, gang. maybe keep the federal government running past Friday while you're at it. This is why the U.S. dollar is soft and why this rally in equity prices is quite broad.

You don't know what to expect from the FOMC this afternoon? Welcome to the club. I am not sure very many do. On the one hand (here we go), there is good reason to do almost nothing until there is more certainty regarding the nation's fiscal situation. In other words, don't give Congress more reason to fail to act, they are already very good at failure. Excellent in fact.

Yet, with the economy showing renewed weakness across a plethora of data-points, and with many major cities either going into or considering going into new lockdown periods, the velocity of money almost certainly will slow badly over this winter. There will be pressure on this Fed to act.

We know that they cannot do anything productive with interest rates. Europe has proven that negative rates do not promote growth. Currently, the Fed is buying $80 billion per month in Treasury securities and $40 billion per month in mortgage-backed securities. The FOMC either in the statement or the press conference will have to guide on the future course of the quantitative easing program whether they act this afternoon or not.

I think it is quite obvious that the Fed can reduce the support for MBS. Think maybe the housing market is hot enough? Just maybe?

That leaves the slope of the yield curve. While I fully support anchoring the short end of the curve at zero, I will most likely disagree with the further intentional flattening of the curve as supplies of 10-, 20- and 30-year paper will grow. Have we not learned anything from the near colossal and constant failure of the Bernanke led Fed? Have we not learned that a nearly flattened curve prevents both the growth we as a people seek, and the consumer level inflation sought by the central bank itself?

I am quite alright in shifting the allocation of resources between MBS and Treasuries. I am quite alright with managing the yield curve, but understand this: Once 30-year paper yields almost the same as 30-day paper, we are lost.

Manage a proper-looking yield curve or deal with bubbles forever. Housing bubbles. Equity market bubbles. Debt security bubbles. Yes, I speak against my own short-term interests as an equity trader. It's not about me. Remember the code.

I know that you saw the news. News broke, reported first at Nikkei Asia on Tuesday, that Apple (AAPL) plans to produce between 95 million and 96 million iPhones over the first half of 2021. This would be a 30% increase over H1 2019. Apple has also informed suppliers that the company could order as much as 230 million iPhones for the full year.

Interestingly, as the planet wrestles with the ongoing pandemic, demand seems to be higher for the higher-end 5G iPhone 12 models than for lower-end models targeted at those on a budget. 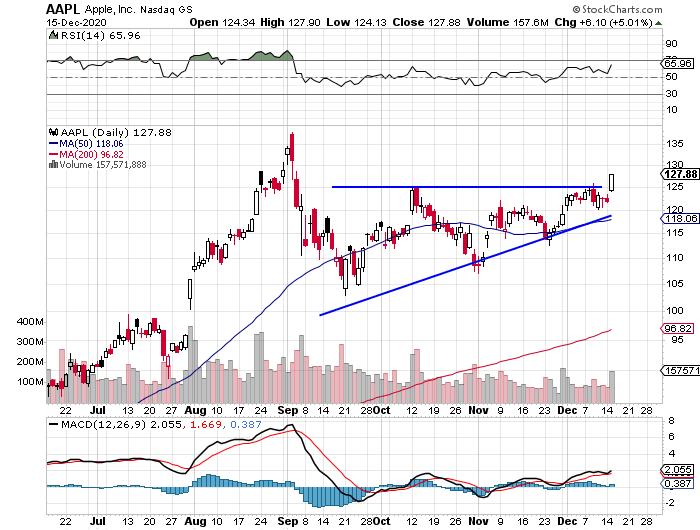 After Apple split four-for-one back in late August, the shares have formed what we in the business refer to as an ascending triangle. An ascending triangle is considered a bullish pattern of continuance as long as the trend prior had been upward, which it was. The flat top of the pattern is indicative of technical resistance, while the series of higher lows indicate professional accumulation.

Should AAPL hold this just-taken $125 pivot, I think a $150 target price would be comfortably conservative. I am long the name, which does not make me special. You probably are too, whether you know it or not.

(Apple, and CVS are holdings in Jim Cramer's Action Alerts PLUS member club. Want to be alerted before Jim Cramer buys or sells these stocks? Learn more now.)

Get an email alert each time I write an article for Real Money. Click the "+Follow" next to my byline to this article.
TAGS: Federal Reserve | Futures | Indexes | Investing | Markets | Small Cap | Stocks | Trading | Treasury Bonds | U.S. Equity | Coronavirus