For his first Executive Decision segment of "Mad Money" Monday, Jim Cramer spoke with Giovanni Caforio, CEO of Bristol-Myers Squibb Co. (BMY) , the drug maker that just closed on its acquisition of Celgene.

Caforio said as a combined company Bristol-Myers and Celgene can help more patients with strong positions in the treatment of cancer and cardiovascular disease. The new Bristol-Myers, he said, is a growth company that is well-positioned to succeed.

Bristol-Myers is in the process of launching seven new drugs, Caforio said, and the pipeline includes 50 drugs that are in phase one or two testing.

When asked about drug pricing, Caforio said access to affordable medication is an important issue. There needs to be policy changes to make drugs more affordable, he said, and if the industry works together with regulators they can get more treatments into the hands of more patients.

Let's check out the pricing of BMY stock.

In this daily bar chart of BMY, below, we can see that prices have broken out on the upside from a large bottom formation. BMY is above the rising 50-day simple moving average line as well as the rising 200-day moving average line. We can see a bullish golden cross in early October when the 50-day line crossed above the 200-day line. The level of trading volume has been pretty flat the past year except for the recent surge, but the daily On-Balance-Volume (OBV) line shows a rising pattern from April, telling us that buyers of BMY have been more aggressive for several months. The OBV line turned down recently because of the huge volume surge getting subtracted from the running total. The trend-following Moving Average Convergence Divergence (MACD) oscillator turned bullish in August when it moved above the zero line, but recently the oscillator has crossed to the downside for a take profits sell signal.

In this weekly bar chart of BMY, below, we can see that prices are above the rising 40-week moving average line. The weekly OBV line shows a very strong move up from July followed by a correction lower. The MACD oscillator on this longer time frame is bullish but showing some recent narrowing.

In this first Point and Figure chart of BMY, below, we can see that the recent dip in prices has generated a nearby downside price target of around $53. 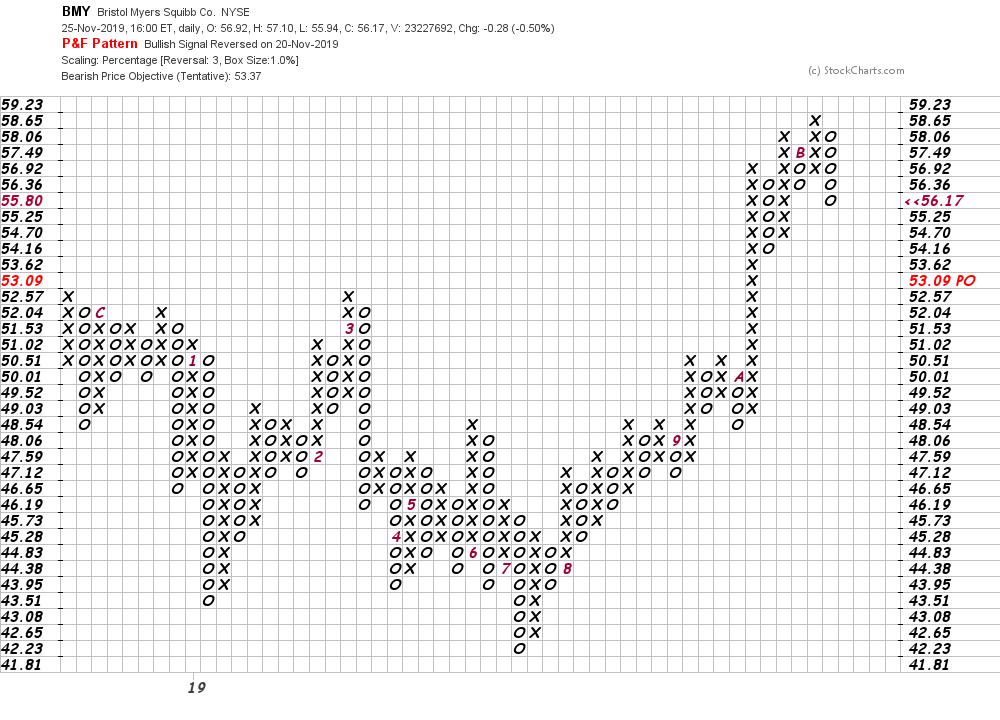 In this second Point and Figure chart of BMY, below, we created the chart using weekly close only data and here a potential price target of $87 is indicated. 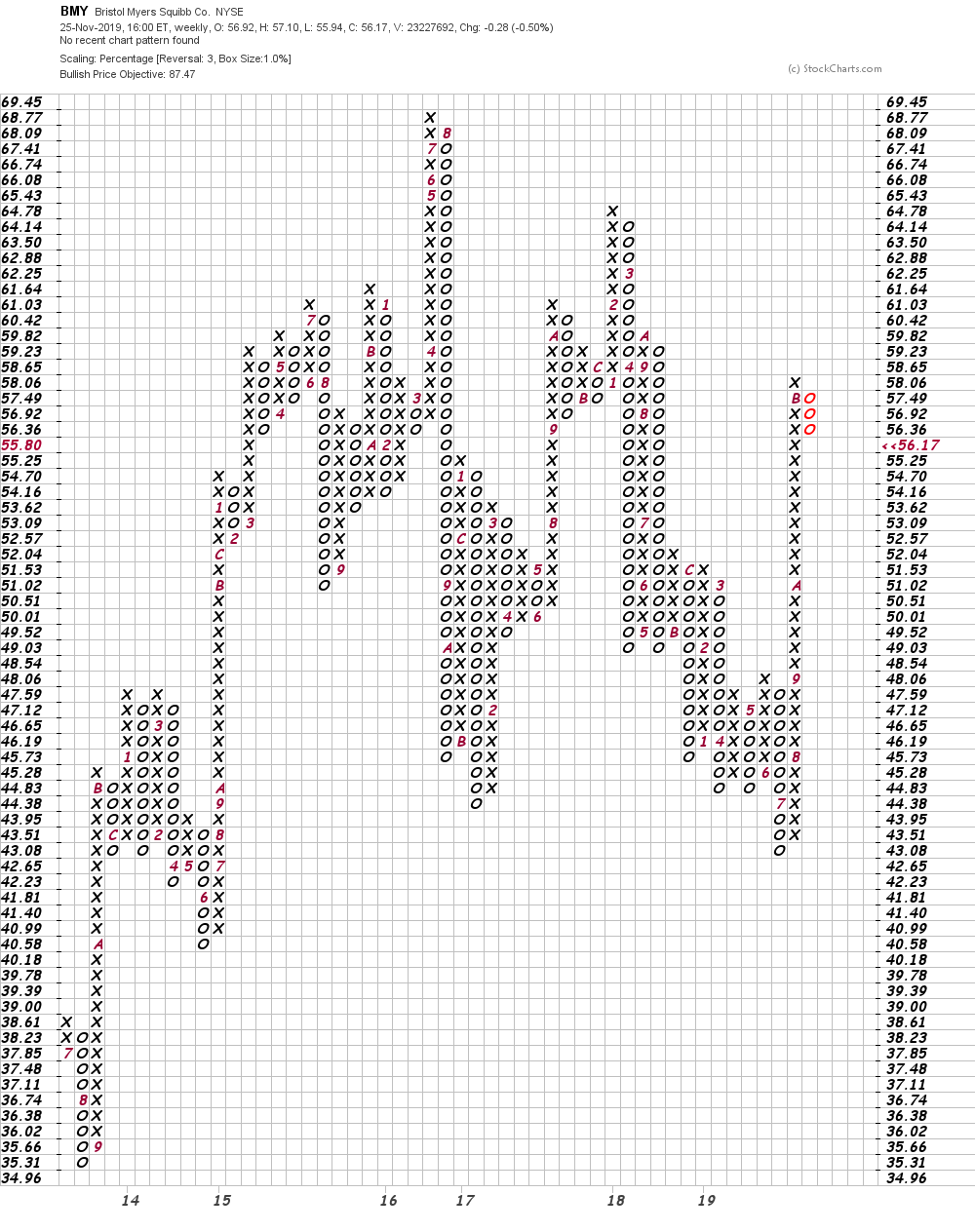 Bottom line strategy: BMY looks like it is already showing some stability around $56, so we may not have a deeper pullback to the $53 area as the first Point and Figure chart suggests. I remain positive on BMY and we might see some more sideways price action before renewed gains in the weeks and months ahead. The $87 area is our next price target.

Get an email alert each time I write an article for Real Money. Click the "+Follow" next to my byline to this article.
TAGS: Investing | Stocks | Technical Analysis | Pharmaceuticals | Mad Money | Executive Interview | Real Money

Make a Run for the Banks

Here's a play in the Financial Select Sector SPDR Fund as its approaches $25.

Jim Cramer: Let the Barbell Do Your Heavy Lifting

Investing isn't brain surgery: Keep a portfolio that's diversified with these qualities, and it will pay off on days like this.

We have an interesting crossroads here.

C has a vibrant and liquid options market, so even playing strategies like spreads and combinations is relatively easy to do.

The Fed is hoping its plan works, but one big risk is stagflation.