"Stick with Bristol-Myers Squibb over Mallinckrodt PLC (MNK) which has been in a downtrend from August," Cramer told viewers.

Let's take a look at the charts of BMY.

In the daily bar chart of BMY, below, we can identify three trends in the past twelve months. First there is a rally from last May to early October. Then, from October to early January prices slump, After that, Bristol-Myers Squibb's stock price has begun to turn sideways and start some bottoming/basing action.

The chart below shows a low in early January and a retest of the low last month in April. There may be further testing of the $46-$44 area, but for now the low has been holding. The slope of the 50-day moving average line is still negative or bearish, but prices are testing this moving average line now.

A close above the May high around $49 will improve the picture.

The daily On-Balance-Volume (OBV) line shows a rise from April, and that's a good beginning along the Moving Average Convergence Divergence (MACD) oscillator ready to cross above the zero line.

In the weekly bar chart of BMY, below, we can see that prices have been struggling for a while now. The $46-$44 provided some support back in early 2017 and again this year.

The weekly MACD oscillator is poised to signal a cover shorts buy signal.

In this point and figure chart of BMY, below, we can see a potential longer-term price target of $71 for BMY. 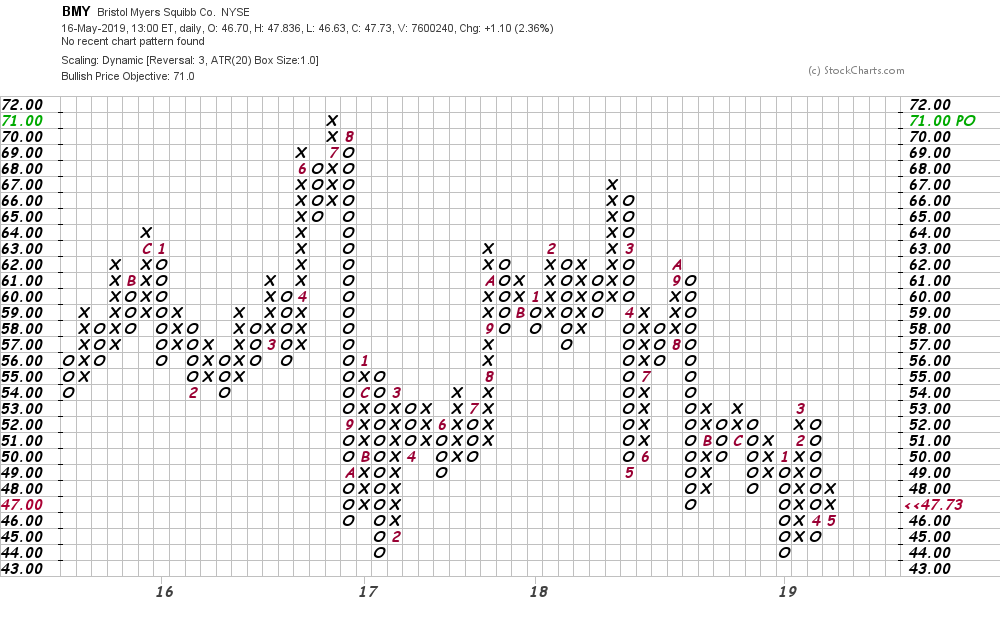 Bottom-line strategy: BMY is not "out of the woods" yet, but aggressive traders could probe the long side here risking a close below $44. A new low close would refresh the downtrend. The longer-term point and figure price target is now $71.

Get an email alert each time I write an article for Real Money. Click the "+Follow" next to my byline to this article.
TAGS: Investing | Stocks | Technical Analysis | Pharmaceuticals