In his second "Executive Decision" segment of Mad Money Monday night, Jim Cramer sat down with Doug Pertz, president and CEO of Brink's Co. (BCO) , a stock that's up 22% for the year.

Pertz said his company's acquisition of rival Dunbar is going great and soon the Dunbar trucks will be converted to the Brinks name, adding to their dominant position in the industry. However, despite their size, Pertz noted that there are still 3.8 million retail locations in the U.S. and that leaves a lot of room for growth.

Brinks is also looking into new opportunities outside of transporting cash. The cannabis industry is seeing huge growth, Pertz noted, and is one area where secure transportation and logistics services will be needed. Let's see if this potential growth translates into a strong chart picture.

In the daily bar chart of BCO, below, we can see that despite the rally so far this calendar year, prices are still below the peak seen in July. BCO has been crossing above and below the flat 50-day moving average line the past few weeks and the 200-day line is still displaying a negative slope.

The volume of trading looks like it has declined since December but the On-Balance-Volume (OBV) line shows a rise from October to the end of April. The OBV line has weakened the past five weeks and needs closer watching.

The Moving Average Convergence Divergence (MACD) oscillator shows a peak in late February and it is now testing the zero line, which tells us that there is no trend strength. Further weakness in the MACD oscillator will be a sell signal.

In the weekly bar chart, below, we see that BCO has been unable to push above the $85-$90 area for the past two years. The slope of the 40-week moving average line is slightly bearish.

The weekly OBV line shows a decline from last June and the weekly MACD oscillator has crossed to the downside for a take profits sell signal.

In this Point and Figure chart of BCO, below, we can see a modest upside price target of near $85. A trade at $86.45 is needed to strengthen the chart further. 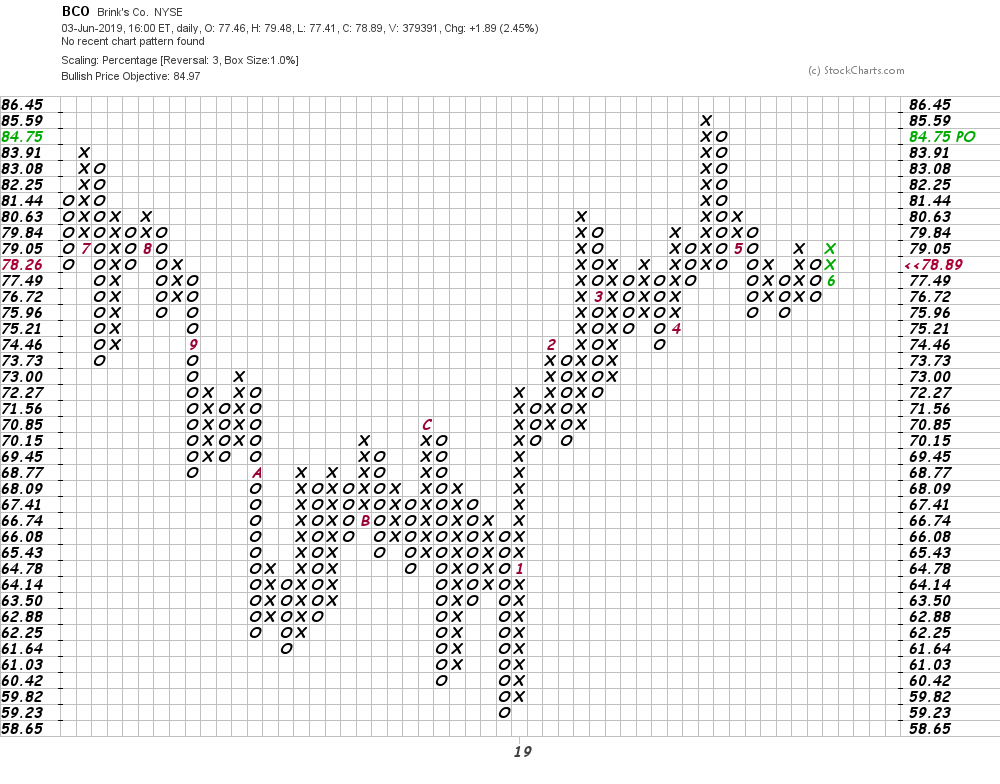 Bottom-line strategy: BCO could try the upside in the days and weeks ahead but the longer-term picture (weekly chart) shows a potential distribution top. Let's look for better opportunities elsewhere.