We broke out of the trading range. Or did we?

We broke out of the one month trading range that the whole world seemingly was focused on, but now I see folks who would like to stay bearish, saying that we're still in the same trading range we've been in for 18 months.

First of all, it's more like 21 months -- but who's counting? I count back to 21 months, because I date it back to the January 2018 high. Quite frankly, if you are the type of person who only looks at charts -- I am not; I prefer the indicators -- then this is not a trading range, is it? It's an upward sloping line for the most part.

So let's discuss the indicators, which in my view portray a better view of the market. For the last week or so, the indicators have been speaking of better breadth and too much negativity. The S&P 500 has been green for five of the last six days, yet the negativity has been strong, until Thursday when it was pared back a bit.

When it comes to breadth, I have noted the cumulative advance/decline line has been making new highs. That is simply not bearish, especially when it makes new highs while the S&P is not making new highs. It made a new high again on Thursday.

Or what about the number of stocks making new highs? I praised them on Wednesday, when there were 219 new highs. Thursday on the big breakout saw 178 new highs. That's not the direction we want to see.

Yet the number of stocks making new lows was a mere 11. Recall back in late July I complained, because new lows were numbering 50-plus on a daily basis, so 11 is praiseworthy. It's actually where the new lows should be during a market rally.

Then there is the put/call ratio which was 82%, the lowest reading since July 10. When I noted Wednesday that I thought a breakout would see sentiment shift in a hurry, I didn't expect it to happen that fast. Yet it did.

On a more intermediate-term basis, the 30-day moving average of the advance/decline line is mostly oversold. Several weeks ago I had noted it would be that way post Labor Day.

On an intermediate-term basis, the McClellan Summation Index is heading upward and now needs a net differential of negative 2,300 advancers minus decliners to halt the rise. I consider that a smidgen overbought, but it's a good cushion. More importantly, the trend in it is up.

On an intermediate-term basis, the 10-day moving average of the put/call ratio is heading down -- those lower numbers help it move down faster. This tends to be supportive of stocks.

The four week moving average of American Association of Individual Investors bears has finally peaked and turned down, which tends to be supportive of the market. 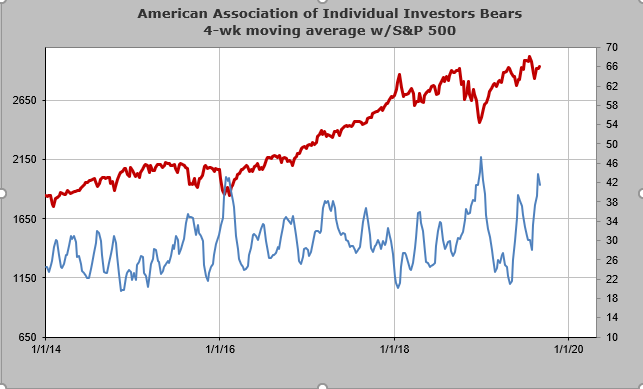 Perhaps the nonfarm payroll numbers released on Friday sees the market give back some of the recent gains, but until sentiment turns decidedly bullish or the indicators roll back over or both, I think pullbacks will lead to another rally.

Get an email alert each time I write an article for Real Money. Click the "+Follow" next to my byline to this article.
TAGS: Economy | Investing | Stocks | Technical Analysis |