Alphabet (GOOGL) shares opened the week down roughly $30 and have more than doubled that decline by early afternoon.

The Wall Street Journal reported the Department of Justice is opening an investigation into Google's compliance with antitrust laws. This isn't the first time a government entity has looked into the company. Recently, a probe by the European Union into the business practices of Alphabet resulted in little discernible impact to the company despite intense scrutiny.

Back in 2013, the FTC examined the company. There were some initial murmurs Google could be broken up, but the probe resulted in no further action to be taken.

I wonder, though, if a breakup would be a negative event. Given all the pieces that make up Alphabet, the sum-of-the-parts likely holds more value than the whole. There would definitely be excitement for some of the spinout potentials.

Waymo would offer an instant challenge to Tesla (TSLA) dollars. YouTube would attract streaming dollars rushing into Roku (ROKU) , Disney (DIS) , and Netflix (NFLX) . Google Fiber presents a challenge to old-school telecom. Verily and Calico could team up and find a home in the life sciences sector.

I'd bet every single one of these subsidiaries would be worth more outside of Alphabet than inside the current shell.

Alphabet is more of an investment than a trade for me, so I'm focused on the long-term picture. It's not often I examine a monthly chart here, but when I do, it is because I see it as vital. 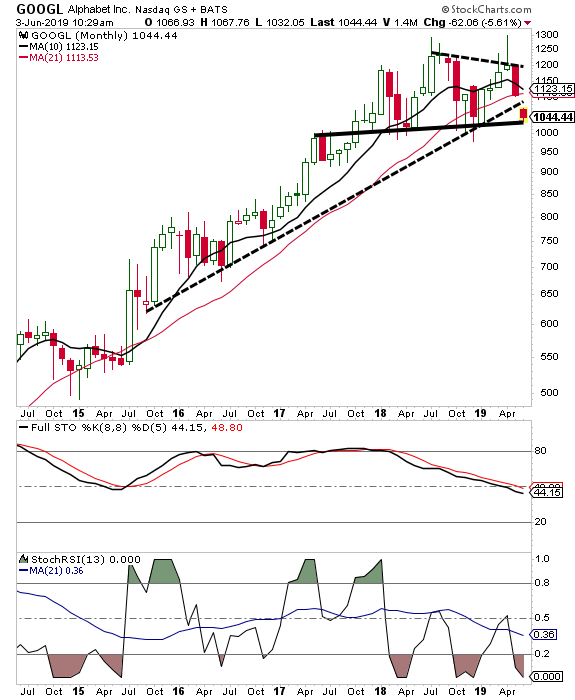 The action early in June creates a concern for the month. Alphabet shares have created a huge wedge pattern (black dotted line) with the resistance portion forming over the past year.

The higher lows and lower highs created a strong consolidation that appeared ready to propel Alphabet higher two months ago. Unfortunately, that breakout failed. Earnings reversed the trend in May and now June kicks off with a breakdown below initial support.

Fortunately, we're early in the month, so no need to panic. Plus, there is support around $1,025 that goes back more than two years. While bulls are at risk here, the pattern becomes more triangle than wedge and still could work for the bulls.

If Alphabet closes this month under $1,025, then I'd be nervous. If it closes under $1,000, then the risk significantly increases the next $200 will be lower rather than higher.

Based on the current technical view, I believe investors need to sit out Alphabet during the month of June. If the stock rallies back above $1,100, then re-consider the long side, but until then the risk outweighs the reward.