Despite that the Dow Jones industrial average crossed and closed over 30,000 on Nov. 24, and it hasn't done so since, we are still seeing decent breadth in the market. In fact, on Thursday, breadth closed at positive 950, with the S&P slightly down on the day.

Yet there has been an awful lot of stalling out lately. That's not a bad thing. Stocks need to rest, but I have my eyes on Industrial Select Sector SPDR Fund (XLI) , an exchange-traded fund for the industrials. Why? Because three months ago every guest on TV wanted to be long technology just as it peaked. Now every guest wants to be long industrials. And at least for now there has been precious little progress made in XLI since the initial Pfizer (PFE) report a month ago. XLI tagged $88 that day and is now $88.

Around early August everyone discovered how many homes were being sold. You can see the iShares US Home Construction fund (ITB) hasn't done a thing since everyone seemingly discovered the trade. In fact, if stocks really did go down, we might call that a head-and-shoulders top, but in this market, stocks threaten to break and don't. But they do stall out, so I am paying close attention to the XLI.

We all know sentiment is quite giddy. There are precious few sentiment indicators that are not at an extreme. Even the American Association of Individual Investors (AAII) saw the bears drop to their lowest level since January. We have seen it go lower, so I wouldn't call this extreme, but sentiment is quite one-sided. If breadth were poor or if breadth falters, it will be problematic for the market. That's why I am watching some of these favored groups. 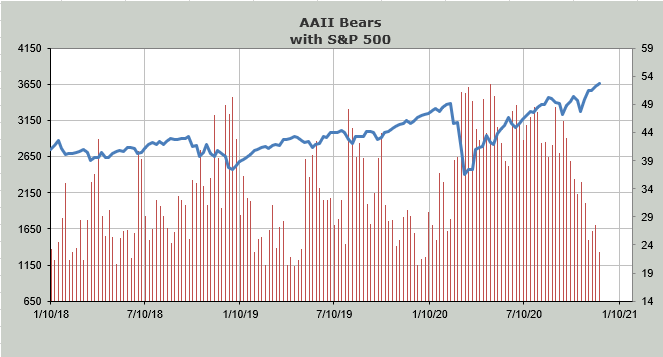 I was asked about the slide in the Dollar Index (DXY), since it seems to have become a topic of conversation this week. There is a measured target around $90-$90.50 from that recent breakdown, and it is oversold. The Daily Sentiment Index (DSI) is at $17, so I would think it is close to a bounce.

I would also point out that the euro, which is the largest component in the Dollar Index, has a DSI at 89, so it all goes hand-in-hand.

Should we get a bounce in the buck, I would not be surprised to see gold take a little rest or have a little pullback. But you have to admit the correlation between the dollar and gold hasn't been stellar in November, as they both enjoyed moves on the downside.

I'm Betting Draganfly Will Fly Past Those Other Drone Cos.

Buzz around deal with Apple co-founder should take Draganfly higher, and if you disagree, I have a question for you.

Are Bonds Truly a Hedge for an Equity Portfolio?

The key question is will the bond market hold here or has the Fed already started working behind the scenes supporting it?