BP PLC (BP)  is trading higher before Tuesday's opening bell following the release of their better-than-expected fourth-quarter earnings numbers. I will leave the number crunching and quarter-over-quarter comparisons to someone else and just concentrate on the price charts and volume data for BP, which is Real Money's Stock of the Day and also is a holding of Jim Cramer's Action Alerts PLUS charitable trust.

In this daily bar chart of BP, below, we can see that prices declined from early October to late December before rebounding recently. Back in October BP fell below the declining 50-day moving average line and the flat 200-day line. The daily On-Balance-Volume (OBV) line declined from early October to the middle of December, telling us that sellers were more aggressive. Things have changed from the middle of December; prices turned up and rallied above the bottoming 50-day moving average line. The daily OBV line has launched a new uptrend and the Moving Average Convergence Divergence (MACD) oscillator crossed to the upside in late December for a cover-shorts buy signal. In January the MACD crossed the zero line for an outright go-long signal.

In this weekly bar chart of BP, below, we can see an improving chart and indicator picture. BP is only a few dollars below the declining 40-week moving average line. The weekly OBV line shows improvement from the middle of December, signaling more aggressive buying. The weekly MACD oscillator has crossed to the upside from below the zero line for a cover-shorts buy signal on this longer time frame. 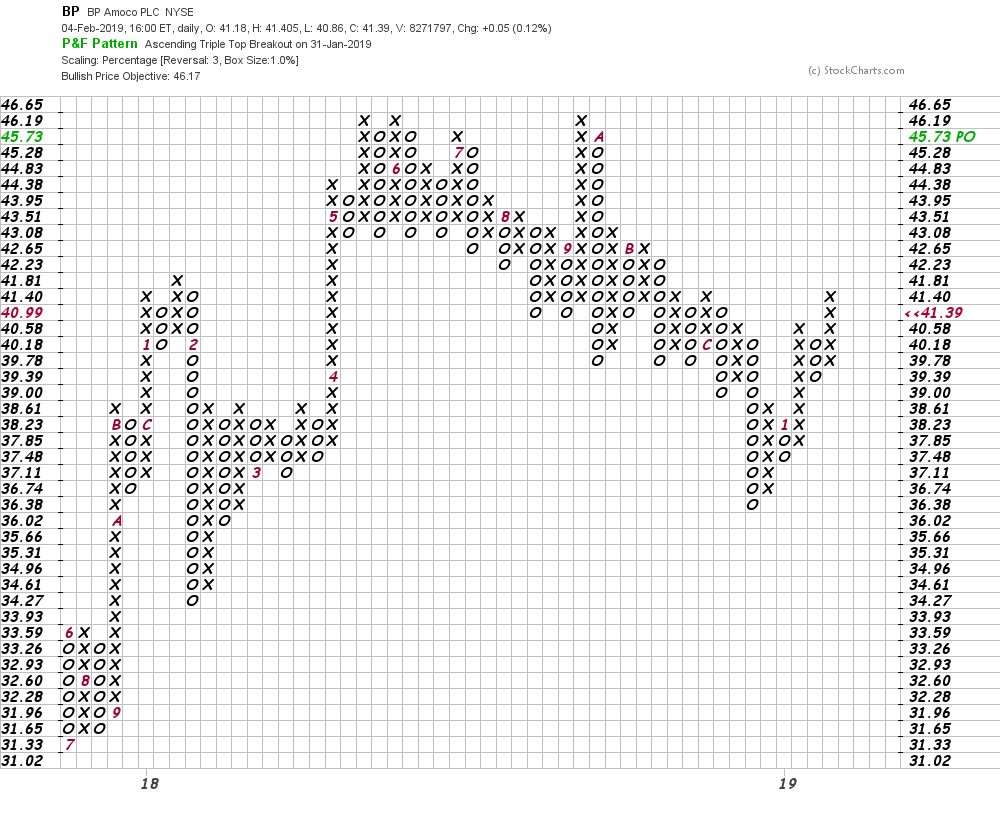 Bottom line strategy: With a boost from the fundamentals, BP shares could rally to break the 200-day moving average line and challenge the late September-early October highs in the $46-$47 area. Traders could operate from the long side, risking a close below $39.50 for now.

Get an email alert each time I write an article for Real Money. Click the "+Follow" next to my byline to this article.
TAGS: Earnings | Investing | Stocks | Technical Analysis | Energy | Natural Gas | Europe | United States | Real Money | Stock of the Day