By STEPHEN GUILFOYLE Sep 16, 2019 | 11:47 AM EDT
Stocks quotes in this article: BP
Yeah, that's me. I'm the guy. The guy who writes and speaks often of major oil -- especially the producers -- as favorable longs. It's no secret. I am long a basket for three main reasons: low valuations, cash flows, and very high -- yet I believe sustainable -- dividend yields. The poster stock for what I just described would be the old British Petroleum , now BP PLC ( BP) . This is a name where I do trade a short-term position around a core position out of necessity. Otherwise, the position would be negative, and given how long I have been involved ... very negative. Yet, I can not remember when I was flat (I could look it up), and the name has performed through the black magic of net-basis reduction.
I would rather see dividends put to better use than simply keeping a position positive, but these types of oil stocks are so unique when placed in perspective to our broader marketplace. These dividends out-perform those of defensive (not defense) plays without cutting the investor off from pro-growth developments, such as a potential "trade peace" between the U.S. and China, or a simple relaxation of the Treasury yield curve. While utilities, or any stock with a 2.5% or 3% dividend yield, might be pressured as the U.S. 10-year note works its way back toward 2%, stocks with rather safe 6.5% dividend yields should not. These are certainly not bond proxies.

While BP has not performed in recent quarters as the firm had prior, I want readers to keep a couple of things in focus. BP reported on July 30 a quarter that beat expectations on both the top- and bottom-lines. That said, both profit and revenue printed lower year-over-year for a second consecutive quarter. The firm is slated to report fiscal third quarter results on Oct. 29. Expectations are so that the streak will run to three quarters in a row. That said, the shares trade at less than 10-times forward-looking earnings, with the energy sector coming in trading at more than 15-times.
Gross Profit Margin has been expanding over the past year, while Operating Margin has contracted slightly. Operating Cash Flow? That one is still in excellent shape at $25 billion over the trailing 12 months, and I would expect this metric to improve for long-term investors. You see, BP is still plagued by the Macondo Prospect oil spill in the Gulf of Mexico back in 2010. This drag on performance has run its course, and BP has paid a heavy price. Payments related to that environmental disaster are projected to run at $2 billion for the full year 2019, and $1 billion in 2020. To me, I see this as a revenue-produce worthy of the spot it has on my roster. One, it's really just not very volatile. Two, it makes the position easy to write calls against that pay cash, yet offer no increased risk beyond opportunity cost. Three, as I keep telling you, they pay you just to hang around.

The Chart: Not Pretty

Obviously, this is an unattractive chart. That said, today's pop brings the shares above the late July high, forming what may look like the formation of a cup in hindsight. In addition, we see the shares taking the 50-day simple moving average on a gap, then placing upside pressure on the 200-day simple moving average. What am I trying to tell you? 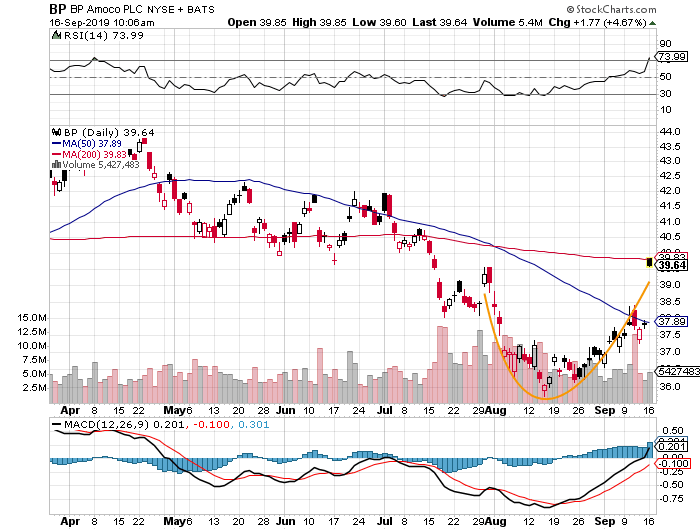 For short-term investors sporting a nice profit, there is nothing wrong with taking anything off now. Now, stay with me. There's an old adage among traders that says "gaps always fill." Given that there is no reason to consider this shock to supplies as permanent, this gap likely will fill. That's why I am not adding Monday, and I would not suggest those not in the name to enter now. Those looking for entry might be wise to enter on the fill, or what will look like the cups' handle on the chart.
Why enter then? I already gave readers my three reasons. The fourth is the potential for either a secondary terrorist attack of this nature, or a military response, or both. Should this situation escalate, increasing U.S. shale production or not, a risk premium greater than the one seen Monday morning can't be discounted. That's my plan, anyway. BP $40 calls expiring Nov. 15 are still valued at around $1.10.
(BP is a holding in Jim Cramer's Action Alerts PLUS member club. Want to be alerted before Jim Cramer buys or sells this stock? Learn more now.)
Get an email alert each time I write an article for Real Money. Click the "+Follow" next to my byline to this article.
TAGS: Investing | Oil | Stocks | Oil Equipment/Services | Middle East | Stock of the Day

Is Your Portfolio Out of Style? Try Some Calvin Klein, Guess? or DKNY

The name behind these brands and more could help you tailor a nice trade.