BP plc (BP) was favored by Jim Cramer during the fast-paced Lightning Round that was part of his Monday "Mad Money" program on CNBC. Everyone has noticed that oil prices have slumped sharply since early October and this downturn along with a broad market decline has hurt the share price of BP. Is the worst behind it? Let's check out the charts and indicators for BP, which is a holding of Jim's Action Alerts PLUS charitable trust.

In this daily bar chart of BP, below, we can see a number of sell signals the past two-and-a-half months. Prices made a high in late September/early October and retreated to the cresting 50-day moving average line. By late October BP closed below the 50-day line and the flat 200-day moving average line. A rebound at the end of October failed at the underside of these two averages, telling me that traders and investors were reacting to these indicators. By the end of November the 50-day line fell below the 200-day line for what is commonly called a death cross.

From the beginning of October the On-Balance-Volume (OBV) line weakened and told me that sellers of BP had become more aggressive. The only positive I see on this chart is that the pace of the decline has slowed since late October. The 12-day price momentum study has been making higher lows from late October, and that is a bullish divergence when compared to the lower lows in price. Maybe this divergence can generate a rally in the weeks ahead if prices can continue to hold in the area of the February/March lows.

In this weekly bar chart of BP, below, we see a mixed picture. Prices are holding chart support in the $38 area but remain below the flat 40-week moving average line. The weekly OBV line has been weakening slowly since June and the MACD oscillator is in bearish territory below the zero line and has yet to begin narrowing, but that could happen soon.

In this Point and Figure chart of BP, below, we see a mixed picture. Prices have declined since June (look for the "6" on the chart) and are in an area of support judging by the volume at price bars on the left side of the chart. There is a $33.92 price target indicated, but we may not reach it if prices can rally to $40.99. A rally to $40.99 should improve the chart picture. 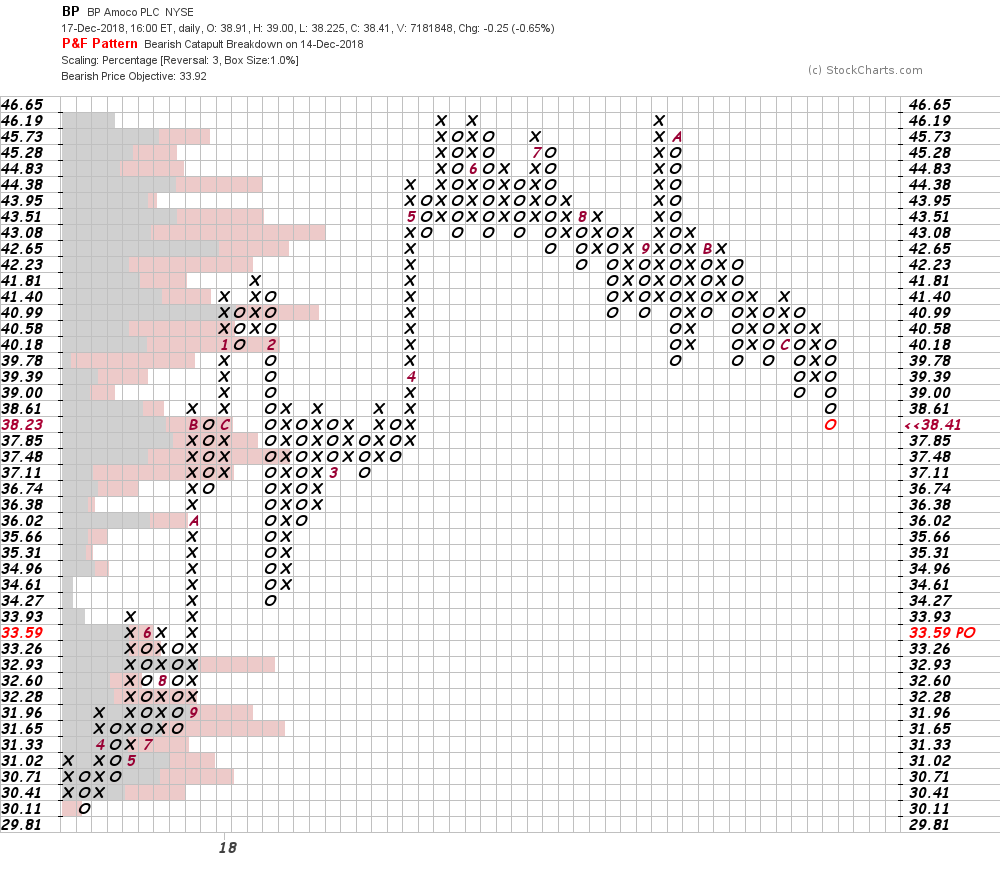 Bottom line strategy: BP is still pointed down but the pace of the decline has slowed. Crude oil prices are very extended on the downside. The Dollar Index looks toppy. These observations could be enough to spark a reversal. If you decide to go long here, risk a close below $37.

Get an email alert each time I write an article for Real Money. Click the "+Follow" next to my byline to this article.
TAGS: Investing | Oil | Stocks | Technical Analysis | Energy | Real Money |