Losing stocks can become winners again if management makes some smart decisions, Jim Cramer told viewers of "Mad Money" Wednesday. That certainly has been the case with Boston Beer Co. (SAM) , best known for Sam Adams. The stock has skyrocketed from $150 a share just two years ago to near $400 at present.

Sam Adams was a pioneer in the craft beer movement and for several years was red hot. But as more and more craft beers entered the market, SAM saw sales growth decline from 22% in 2014 to 6% just two years later in 2016.

In February 2018, Boston Beer hired a new CEO and expanded its portfolio away from beer and into other beverages with its Angry Orchard and Twisted Tea brands. Both brands were soon able to offset the declines in beer. The company then added Truly, its spiked seltzer brand, to the mix and sales were again off to the races.

In its last conference call, management said Truly continues to exceed expectations, news that has sent shares higher. Cramer said SAM is now super expensive at 39x earnings. He suggested not chasing it higher and waiting instead for a meaningful pullback. Let's check the charts and indicators to see when this pullback may develop.

In this daily bar chart of SAM, below, we can see how prices bottomed quickly in January and then moved sharply higher in three waves. SAM is above the rising 50-day moving average line and perhaps extended above the rising 200-day line. SAM is $90 above the 200-day line, so there is plenty of room for a correction.

The daily volume bars right below the price chart show an uneven pattern and the On-Balance-Volume (OBV) line only pushed up to a new high this month, suggesting that buyers of SAM have not become aggressive until recently. Aggressive buying late in a move can mean we have too many recent longs and a small dip can put a lot of players underwater. The Moving Average Convergence Divergence (MACD) oscillator is poised to cross to the downside for a take profits sell signal.

In this weekly bar chart of SAM, below, we can see that prices are about $100 above the rising 40-week moving average line -- similar to the extended position of prices in the middle of 2018. The weekly OBV line is at a new high to confirm the price gains and the MACD oscillator on this time frame is still bullish and rising.

In this Point and Figure chart of SAM, below, we can see a price target of $406 projected. Not much room on the upside. 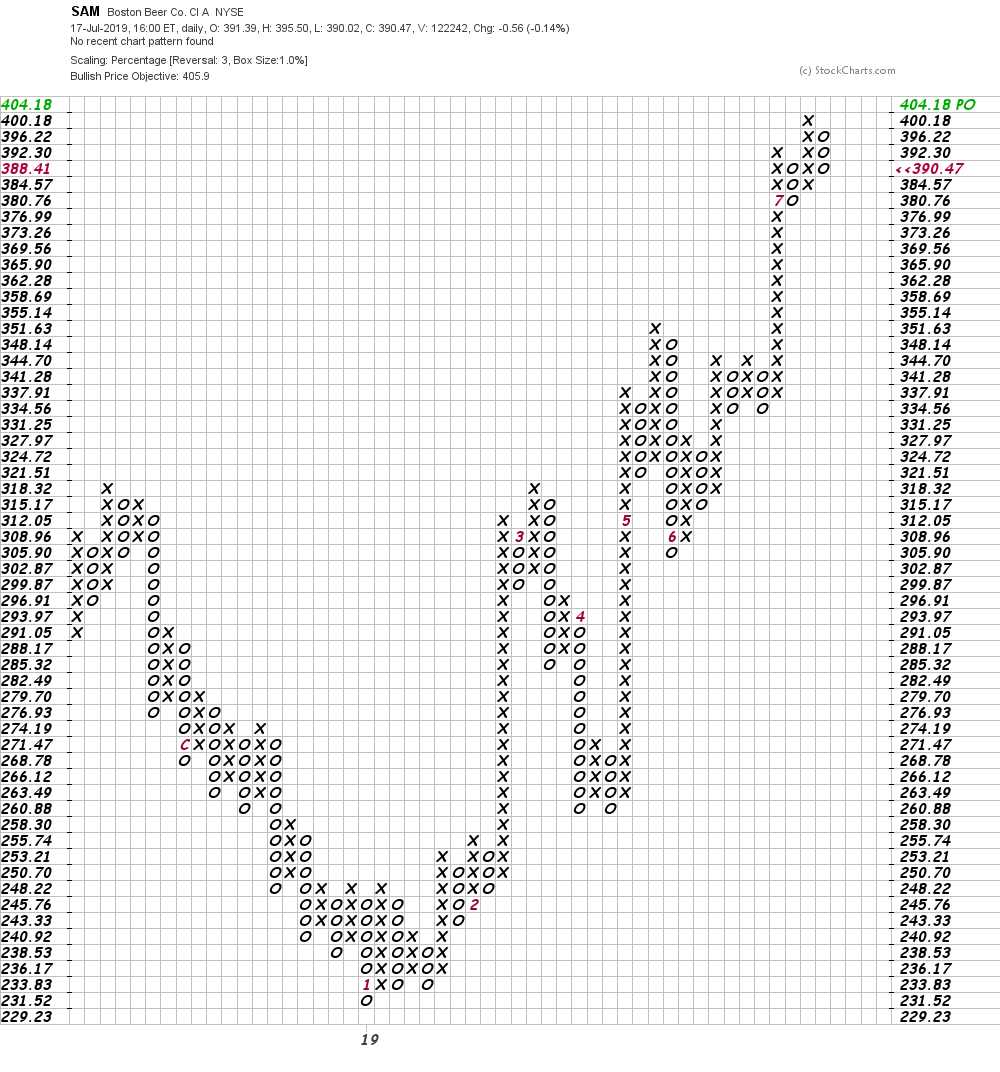 Bottom line strategy: With prices extended above the popular moving averages and prices near a Point and Figure target, SAM is poised for a correction. A decline to the $345-$330 area would not surprise me.

Get an email alert each time I write an article for Real Money. Click the "+Follow" next to my byline to this article.
TAGS: Investing | Stocks | Technical Analysis | Beverages | Consumer | Mad Money | Real Money