Conroy said Boot Barn saw some weakness in the work apparel segment last quarter, but he noted that while some investors saw that as a negative it's also proof that the company's diversification strategy works. Boot Barn was still able to post a 5% increase in same-store sales. He added that the weakness in work apparel is likely transitory.

Conroy said Boot Barn expects a delay in some shipments from the shuttering of factories in China due to the coronavirus, but overall he is not expecting any material impact on earnings. He was also bullish on the company's outlook in Texas, where sales have been slowly rebuilding to where they were at the peak of the oil shale boom.

OK, cowboys, let's saddle up and check out the charts and indicators.

In this daily bar chart of BOOT, below, we can see that prices worked lower in January after rising for most of 2019. BOOT has broken down below the cresting 50-day moving average line and tested the rising 200-day moving average line. The $36-$32 area should act as chart support as it acted as resistance in the rally back in September and October. The daily On-Balance-Volume (OBV) line has been pointed down since the beginning of the year, telling us that sellers of BOOT have been more aggressive. The Moving Average Convergence Divergence (MACD) is in an outright sell mode below the zero line.

In this weekly bar chart of BOOT, below, we see some weakness. Prices have declined to test the rising 40-week moving average line. Prices could hold but there is the risk that sellers keep liquidating positions and prices fall further. The weekly OBV line has declined for January and the MACD oscillator has crossed to the downside for a take-profits sell signal.

In this daily Point and Figure chart of BOOT, below, we can see how prices fell straight down and overshot a $37 point-and-figure target. The volume-by-price bars on the left side of the chart indicate we should be in a support zone, but buyers have yet to step up to the plate. 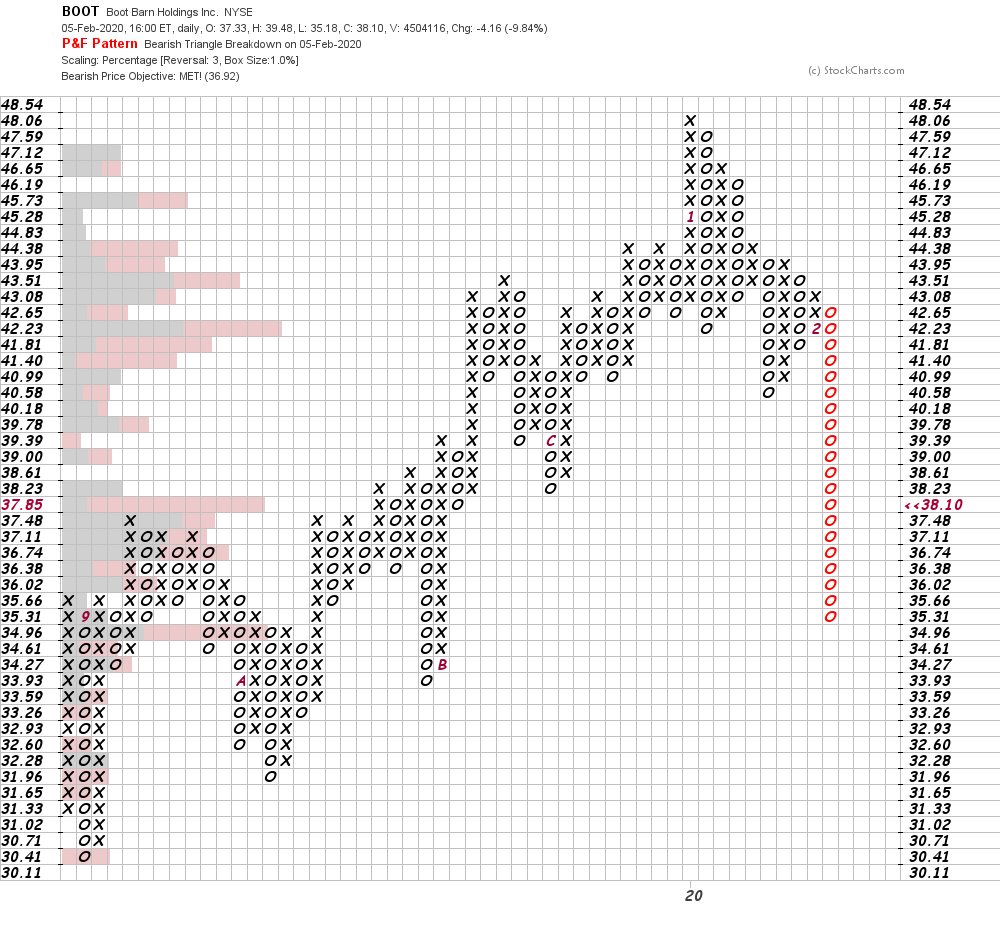 Bottom line strategy: Whether in boots or wingtips, investors have voted with their feet and sold. It would be unusual for prices to quickly reverse back to the upside, so traders need to stand aside and wait for some stabilization before looking at the long side of BOOT.

Get an email alert each time I write an article for Real Money. Click the "+Follow" next to my byline to this article.
TAGS: Earnings | Investing | Stocks | Technical Analysis | Apparel | Consumer | Retail | Mad Money | Executive Interview | Real Money