On Thursday I tweeted out the statistic I gave you the day prior, how AMC  (AMC)  was 11% of the volume on the New York Stock Exchange on Wednesday. And my Mentions blew up. With nonsense. Not with thoughtful discussion, not with interesting questions, not with anything but utter nonsense. Oh, and rocket emojis. Yes, the rocket emojis are back. As I said, nonsense.

And those rocket emojis go hand-in-hand with all those speculative stocks flying. Everything that was hot in January and February has come alive in the last two trading days. Thanks to the rebalancing in the iShares MSCI USA Momentum Factor exchange-traded fund (MTUM) that gave us a huge volume lift in the last minutes of trading, AMC was only 10% of the volume on the New York Stock Exchange, rather than the 15% it was most of the day.

When one stock dominates volume as much as this one has, it is simply not sustainable. But for now it has spread the speculation beyond just itself and therefore has managed to get the Nasdaq McClellan Summation Index using volume to turn up. This is the first time it has done so since it rolled over in February. So that is nothing to shrug at.

It will now require a net differential of negative 2.7 billion shares to halt the rise, which is obviously the largest cushion it has had since February. Aside from that, not much else changed in the market. The number of stocks making new highs increased a bit over Monday's reading, but remains far off the peak readings but overall breadth is fine.

Sentiment-wise the National Association of Active Investment Managers (NAAIM) saw its exposure move up to 68 from 44 a week ago. So while it increased exposure, there is nothing extreme in the reading; in fact it is still on the low side. 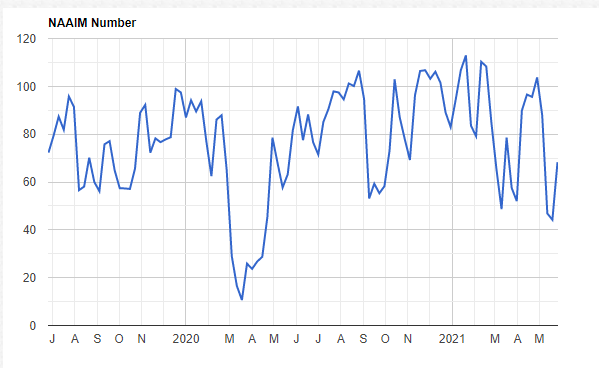 There is one chart I want to point out to you, since I saw so little chatter on it. It's that of the U.S. dollar vs the Japanese Yen. That was one heckuva move on Thursday. And since I have been talking about a potential rally in the buck, this caught my eye.

Despite the lift in the dollar this week the Daily Sentiment Index (DSI) is at 18, so it seems to me there is room for the dollar to strengthen more.

The market is a bit overbought now in the short term, but I think if it backs off, we'll see another rally. You can see that Nasdaq has already lost some of the upside momentum from earlier this week. The Daily Sentiment Index for the Volatility Index moved to 19 on Thursday, so another push upward next week in the market could see the VIX DSI sink to extreme levels. We'll keep an eye on it.