You know what's interesting? This is the eighth trading day of August, and in the week leading up to this month -- and the first few days -- that scary seasonality chart of an August correction was being passed around like candy at a Halloween party. Now, the S&P 500 is up almost 1% since August began, and I haven't seen that scary chart anywhere.

Instead we have the SOX Index down four-straight days and folks get upset with me when I note it. I get responses such as, "Well it was up nine days in a row before that." It wasn't, but OK. That tells me what I have said for the last few weeks: Tech is where folks have been concentrated for the last several weeks and they continue to be heavily weighted there.

It is my view that with bonds now moving back the other way (higher rates), there will be more opportunities in the "reopen stocks." We've discussed the banks and the transports, but let's revisit the transports, since no one seems to be focused on them. They have held for nearly a month at that 14,250 area, now they need to get up and over that downtrend line that has kept them in check for the last few months. There are two legs to the improvement: The first is not going down anymore and the second is crossing that line.

In terms of the statistics on Tuesday, they were incredibly uninteresting. Breadth was mediocre. The McClellan Summation Index has still not managed to lift up or continue down. It's like I want to poke it to see if it is alive.

The new highs continue to disappoint and the new lows expanded a bit on Tuesday. 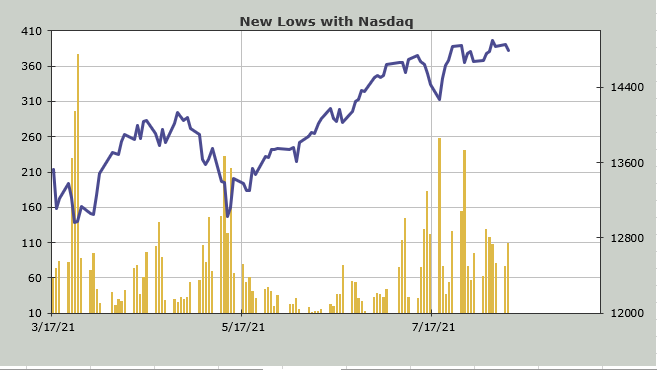 Sentiment changed a bit in that the put/call ratio fell to .73, which is the lowest reading since late July. The Daily Sentiment Index (DSI) for the Volatility Index is now at 10. I think it means we should get a bout of volatility before the week is out.

With that in mind, keep your eyes on this uptrend line for the Invesco QQQ (QQQ) . This line has been solid since that May low in mega-cap tech stocks. I wouldn't be surprised if it breaks before August is over. You know, just as everyone seems to have forgotten that scary August seasonality chart.

In general, the chop continues and within the chop we are getting some group rotation. Bonds are a little bit oversold after so many down days, so I wouldn't be surprised if we see a bounce. With the consumer price index reading out on Wednesday, a big number could be priced in. But I don't think we're done with the move higher in interest rates yet.