"Fear is but for the wicked. So let the wicked tremble before us."

U.S. equity market performance on Thursday was truly remarkable. While heavy selling infected most of the Treasury yield curve -- from the two-year note on out to the long bond -- the S&P 500 tacked on 1.21% and the Nasdaq Composite a cool 1.04%. Nine of the 11 sectors shaded green for the day, led by cyclicals, as was also the case on Wednesday. Defensive sectors took the bottom four slots on the daily performance tables.

Breadth remained outstanding as professional money flocked back into the stock market just a couple days after ducking for cover. Indices more overtly reliant upon broad economic activity outperformed our headline indices for the session. While both the S&P 500 and Nasdaq Composite retook their 50-day simple moving averages (which is key) and managed to close above their 21 day exponential moving averages (by a smidge), it was the Russell 2000 (+1.82%), the S&P 600 (+1.75%), the Dow Transports (+1.67%) and the S&P 400 (+1.43%) that truly impressed.

For the day, winners beat losers at the New York Stock Exchange by just a bit less than 2 to 1, and at the Nasdaq by more than 5 to 2. Advancing volume crushed declining volume by almost 4 to 1 at the NYSE and by a rough 7 to 2 at the Nasdaq.

I cover the Dow Jones Industrial Average far less than I do the other large-cap indices simply because the index is too narrow and is not followed closely by professional money. Thursday was a great example, as the DJIA gained 506 points (+1.48%) but Salesforce (CRM) alone accounted for 123 of those points. The stock soared 7.2% as the company raised its revenue forecast. Just an aside, CRM is trying to break out technically and is a Sarge fave. That said, I took a little something off on Thursday. That's trading around or trying to maximize a core position. I'll explain below.

The bigger story or take-away from the Thursday session was the sharp selloff across the deep end of the Treasury spectrum. You thought the Federal Open Market Committee (FOMC) policy statement was dovish on Wednesday? That's not how global bond traders took it.

One day after Federal Reserve Chairman Jerome Powell made plain that a tapering of the Fed's asset purchase (of balance sheet expansion) program could be announced as soon as early November, the Bank of England followed suit. In addition, Norges Bank (Norway's central bank) actually did pull the trigger on a short-term rate hike, indicating that a second rate hike was likely later this year. Norway became the first G-10 nation to implement a rate hike since the start of the pandemic. By the way, the Fed will be out in force, very publicly today.

Why Did Equities Rally?

It was not really much to do with the Fed at all. Domestic equity markets reacted positively to a belief that the Evergrande story might not quite blow up the world or dramatically slow global economies as Beijing appears to be easing the giant real estate developer to where it's going rather than to allow an abrupt collapse. Then investors became bolder as Speaker of the House Nancy Pelosi said "We'll keep the government open. We'll have the votes to do that and then we'll go to the Senate again." In addition to Pelosi's reassurance regarding the debt ceiling and the federal government's coming fiscal cliff, Senate Majority Leader Chuck Schumer said the White House and key Democratic Party leaders had agreed on a "framework" to pay for the president's economic agenda without offering much in the way of detail. That was enough for equities. The question going into the weekend becomes, "Can the headline indices hold those 50-day lines?" Technically speaking, nothing is really more important from 10,000 feet right now. Expect to see some general profit taking around the bells on Friday.

OK, gang, here it is. I do see the current pace of consumer inflation as more transitory than structural. I also see a global economy unable to sustain increased economic activity apart from the abuse of both fiscal and monetary policy as one has become a public trap only made possible through artificial means provided by the other. What I am saying is that organic economic growth remains too weak to stand on its own, and while the Fed will taper and may even start to get interest rates off of the zero bound the movement toward policy normalization will become politically unsustainable.

As a trader, I identify opportunities and I act.

As an investor, I work around maximizing core positions at times of increased volatility.

As an economist, I believe the extension of the debt supercycle and increased taxation will drag significantly on "organic" velocity, thus forcing the Fed (and all globally significant central banks) to abandon plans to increase short-term interest rates, especially if compelled to finance a large fiscal package (at artificial pricing) that kicks off as the midterm elections approach.

The bottom line is that developed, fiat economies are trapped. Negative real rates are here to stay in my opinion and likely so is TINA (there is no alternative) for equities --. that is, until confidence is finally lost. There is no way to time that, but I think it likely that prior to any outright crash for both the economy as well as financial markets that there will likely be a parabolic move (much more abrupt than what you see now) to incredible heights.

On that day, when it arrives, quality balance sheets will become more important than sales, precious metals and real estate will hold their value better than the majority of equities, and higher-quality cryptocurrencies, depending on where you live, will serve as a tool of capital flight. This is probably why the People's Bank of China (China's central bank) just said that all cryptocurrency transactions are now illegal and must be banned.

A Centers for Disease Control and Prevention (CDC) advisory panel recommended seniors (aged 65+), nursing home residents and certain adults (aged 50-64) with underlying medical conditions should receive a third jab or "booster" shot of the Pfizer (PFE) /BioNTech (BNTX) COVID-19 vaccine. The panel also recommended that adults aged 18-49 with underlying medical conditions should or could receive a third jab depending on their individual risk. Confused? There's more.

Apparently, the panel disagreed with the Food and Drug Administration (FDA) on offering boosters to adults who live or work in places such as hospitals, schools or prisons that place them at a higher risk of becoming infected or passing infections on to others. I'm just the messenger here, gang. I don't make this stuff up.

On Thursday, Salesforce (CRM) increased fiscal 2022 revenue guidance to a range of $26.25 billion to $26.35 billion from the previous $26.2 billion to $26.3 billion. Salesforce also guides fiscal 2023 sales to a range of $31.65 billion to $31.8 billion, which is above the $31.45 billion that Wall Street is seeking. Salesforce also sees an adjusted operating margin of an even 20% for fiscal 2023. The stock took off on the news. I mentioned above that while remaining long the name as a core position I did take some profits close to the Thursday highs. I'll explain. 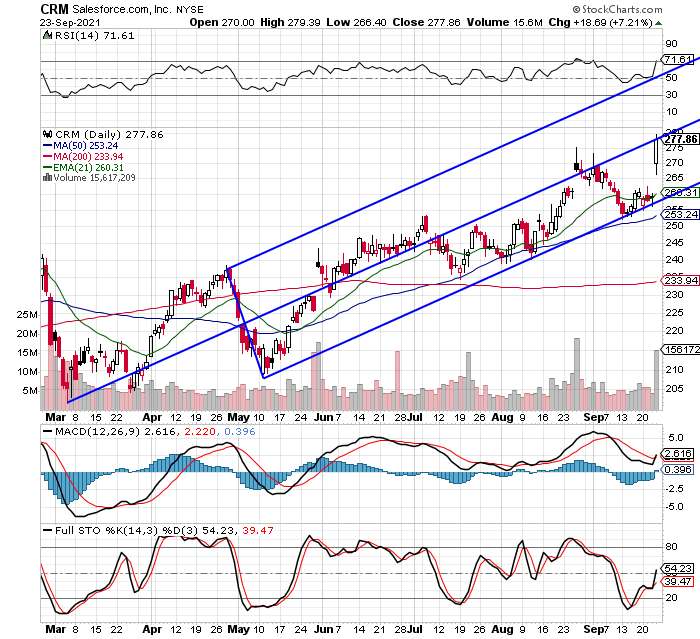 Readers will note that going back to the lows of early March, CRM developed a near-perfect Pitchfork model that moved on Thursday from support at the lower trend line to potential resistance at the middle trend line. The daily moving average convergence divergence (MACD) is in absolutely beautiful shape, and the Full Stochastics Oscillator is still neutral, but the Relative Strength Index (RSI) is sending a warning. This stock has almost always traded lower short-term after the RSI even just kisses the 70 level.

Let's pull back a little and check out the chart for a full year or so...

Very bullishly, CRM is coming out of a more than year-long cup with handle pattern bearing a $275 pivot. This provides me with a target price of $330, which explains why I remain long. Readers will also see the gap created on Thursday. Similar gaps were created in August 2020 and then again in both early December 2020 and in May 2021. In all three cases, those gaps filled, usually within days.

This is why I took some profits in this name on Thursday. I very much intended to re-establish full position size if and when the algorithms that trade this name try to fill Thursday's gap.

(CRM is a holding in Jim Cramer's Action Alerts PLUS member club. Want to be alerted before Jim Cramer buys or sells these stocks? Learn more now.)