The pause that refreshes? Sure didn't feel that way.

It was the day that no one went home happy. It was Wednesday. There were the bears, who looked for the lower bound of the upward trading range in place since mid-October to crack. They skulked away. Disappointed.

There were the bulls, who looked for a short-term oversold rebound, or perhaps a break in the current daily losing streak. There would be no rebound. The losing streak would be extended, even if the conviction of the prior few days was missing.

The action, if that's what we are to call it, was in the bond market. That is where capital is flowing.

Yet again, investors sought the perceived safety found in the long end of the US Treasury yield curve. Either that, or they see the US economy making like a garbage truck rolling off of a cliff in the short- to medium-term future.

Fact is that the Six-Month T-Bill and the One-Year T-Bill are the only maturities across the entire spectrum of offerings that the Three-Month is not inverted against. Even crazier is that the entire spectrum, even the One-Month (30-day) T-Bill, is inverted (-17 basis points against the 30-Year Bond. Other than the overt garbage-truck-over-the cliff warnings, Treasury markets appear healthy and are not sending any messages of warning in particular.

I really can't take it anymore. A bottom is not a support level for yields; it is a resistance level for bonds. I don't care if that's how "they" speak. "They" are wrong. There, I am done.

Now, back to equities.

Equity markets are struggling with the present situation. Readers may recall that for two months I have been referring to the trend reversal of Oct. 13 as a "tradeable bottom" and I have continued to pound that home as that reversal was confirmed and reconfirmed.

Why? I saw a rally that could last at least as long as the balance of 2022. I did not trust that bottom past that point, though. I still would not upgrade that "tradeable bottom" to a bottom sans the qualifying adjective.

Not that I think markets cannot squeeze another three to four weeks out of this rally that has come under recent pressure. I just do not know. Hence, why I have often expressed the sentiment, really going back to November 202, that it was a better time to be a trader than an investor, that it was better, at least for me, to narrow portfolios and shorten targets.

I don't mind hitting singles and doubles and I really thought that the triples and home runs would be tougher to hit this year. Aaron Judge and Pete Alonso were really the consistent home run hitters in New York this year.

So, on Wednesday, equity markets failed to attract a significant bid. That said, the sellers ran into a bit of fatigue themselves. The Nasdaq Composite kissed its 50-day simple moving average (SMA) early on in the session. That line held sufficiently. If it had not, I would be writing a different article right now. The S&P 500 is still dangling out there and has not come close to testing its 50-day SMA, but was soundly rejected on Wednesday at its 21-day exponential moving average (EMA).

The day, not very decisively, shaded red. The S&P 500 gave up just seven points, or 0.19%. It was a fifth consecutive "down" day for that index and an eighth down day in nine. The S&P 500 simply has been moving sideways now since Nov. 10. That day, besides being the Marine Corps birthday, was the day I called the reconfirmation of our change in trend as the S&P 500 gained 5.5% on heavy trading volume for that session.

Scanning the entire spectrum of equity indexes that I keep an eye on, almost all the majors closed lower, with the Dow Transports down 0.94%. Only two gained for the day -- the KBW Bank index finally found a small bid side, gaining 0.22%, and the Dow Industrials gained one point. Not one percentage point. One point.

Defensive sectors outperformed yet again on Wednesday. Of the 11 S&P sector SPDR ETFs, three shaded green. Those were Health Care (XLV) , Staples (XLP) and the REITs (XLRE) . Growth took two of the bottom three spots on the daily performance tables, but none of these funds gained more than 0.82% or surrendered more than 0.6% for the day.

Losers beat winners by 5 to 4 at the Nasdaq and by just a smidge at the New York Stock Exchange. Advancing volume took a 34.3% share of composite NYSE-listed stocks and a 37.9% share of that metric for Nasdaq listings. Aggregate trading volume decreased fairly significantly on a day-over-day basis across listings of both exchanges and across the S&P 500 and Nasdaq Composite as well. In other words, after reducing long-side exposure for two days, the pros decided to sit on their hands on Wednesday.

Such a Nice Fellow

On Wednesday, Bloomberg News reported that Russian President Vladimir Putin discussed the use of nuclear weapons before a meeting of a Kremlin human rights council. Putin stated that Russia would defend itself "with all the means we have if necessary." He went on: "We won't brandish them like a razor, running around the world, but we of course proceed from the fact they are there. This is naturally a deterrent factor, not provoking expansion of conflicts but a deterrent and I hope everyone understands this."

Most alarming was Putin's response to a member of the council who asked Putin to state that Russia would never use nuclear weapons first. His response: "If you don't use them first, that means you don't use them second, either." It was simply jaw-dropping.

Garbage trucks might not be the only things headed for a cliff. The nation faces its next potential fiscal cliff as soon as Dec. 16. That's a week from tomorrow. Federal funding for discretionary programs will expire at that point, should our legislative bodies not get all their ducks in a row and pass something either covering fiscal 2023 or at least kicking the can further down the road.

Remember, the House changes hands in December, placing an expiration date on any current spending plans. And even though the Senate will remain narrowly blue, 60 votes are needed for passage in that chamber, so it looks like compromise will be required regardless.

The US government is little more than a week away from potentially shutting down and this can't be seen as a positive for either the economy or the financial marketplace.

Chevron (CVX) announced on Wednesday that it had reset its fiscal 2023 capex spending budget at $17 billion, which is at the high end of the range ($15 billion to $17 billion) that the oil giant had already provided. While that is up 25% from fiscal 2022, it includes $2 billion earmarked for projects that one would describe as "green" in nature, which is up more than 100% from the year prior.

FYI: While this spending budget sounds large, Chevron averaged a rough $30 billion in capex annually from 2012 through 2019. Chevron is a Sarge name. The stock has now spent two days testing its 200-day SMA.

Readers may recall that the Pentagon last July cancelled its multi-year $10 billion cloud computing contract known as "JEDI" (Joint Enterprise Defense Infrastructure) that had been awarded to Microsoft (MSFT) ; the cancellation was due to changes in technology that had transpired while the contract was delayed in processing. Of course, there were also legal challenges to the award as Amazon (AMZN) had felt slighted due to former President Donald Trump's personal feelings toward former Amazon CEO Jeff Bezos.

On Wednesday, the Pentagon awarded the updated version of this cloud computing program, which has been renamed the Joint Warfighter Cloud Capability program, valued at $9 billion in total, to Alphabet (GOOGL) , Oracle (ORCL) , Microsoft and Amazon. Alphabet had not even entered a bid for the original JEDI contract. The contract will be awarded in segments, with an estimated completion date of June 2028.

The Worst Chart in the World 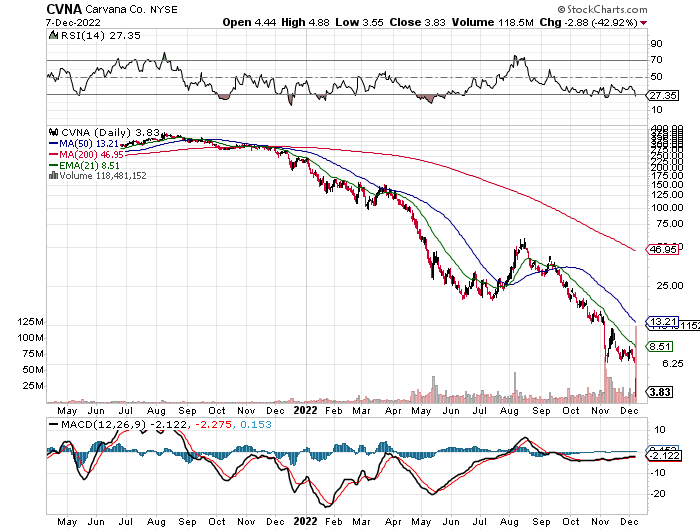 Carvana (CVNA) closed on Wednesday at $3.83, down 42.9% from Tuesday's close and down an even 99% from a late August 2021 high of $376.83. Many Carvana bonds have been trading at a rough 50 cents on the dollar, which caused Carvana's 10 largest creditors to sign an agreement meant "to remain united in restructuring negotiations" as a means of refraining from fighting among themselves. The 10 creditors that include Apollo Global Management (APO) , Pimco and Ares Management cover about 70% of Carvana's debt outstanding.

On Carvana's side, it has hired Moelis & Co as a financial adviser and Kirkland & Ellis LLP as legal counsel as it evaluates restructuring options. An opportunity for my Stocks Under $10 portfolio? I think not.