The more things change with Boeing (BA) , the more they seem to stay the same. The company keeps kicking the can that is the 737 Max fiasco further and further down the road.

United Airlines (UAL) and American Airlines (AAL) have canceled 737 Max flights until at least January, while Southwest (LUV) foresees grounding trouble jet into 2020 as well. That puts Boeing's marquee jet on the ground for at least nine months since the second of two fatal crashes raised questions about the 737 Max's safety.

Of course, the big winner in all of this has been Airbus (EADSY) . Boeing's net orders were down by 84 jets through 2019's first nine months vs. a 127-plane gain for Airbus.

But somehow, Airbus stock has actually underperformed Boeing share since March 11, the day after the second of two fatal 737 Max crashes. True, Airbus was higher by 10% in July while Boeing was down double-digits by mid-August. But the action in Airbus is more concerning than what we've seen in Boeing, and I believe once the 737 Max takes back to the air, Airbus's tumble will continue.

However, most of both stocks' gains came in 2019's first two months. The first 737 Max tragedy (Lion Air) occurred last fall, but BA still enjoyed a big rally before a second crash (Ethiopian Airlines) in March. Boeing retraced its early 2019 rally after that, while Airbus held on to its gains.

My view is once the 737 Max gets fixed and becomes airborne again, we'll see a reversion to the mean, with Boeing stock regaining ground. That doesn't necessarily mean that Boeing will rise while Airbus falls. They both could fall, but Boeing might fall less. Or they both could rise, but Boeing would rise more. Or, the two stocks might meet somewhere in the middle.

Assuming the 737 Max gets off the ground in January or February, this scenario could lead to a 10% outperformance by Boeing relative to Airbus during 2020's first half. But if the 737 Max's grounding drags into March -- putting its time out of service to a full year -- then that outperformance will get kicked further down the road.

Meanwhile, Boeing appears to be entering a make-or-break price pattern: 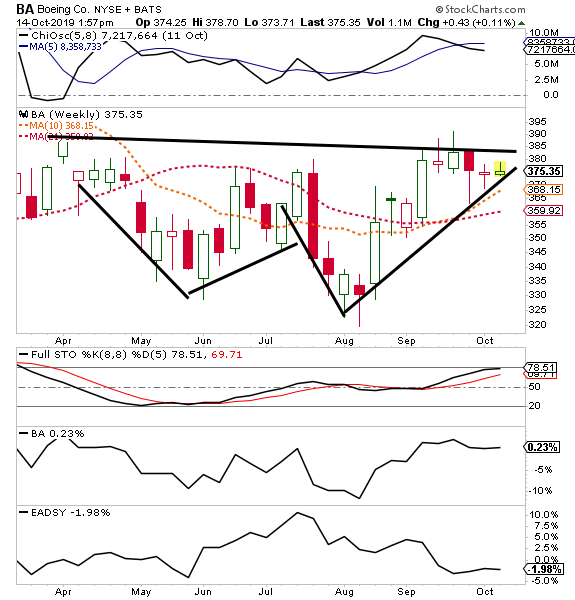 The stock is trading at about $374 as I write this, and a weekly close above $385 would give the bulls a strong "W" pattern to draw momentum traders into the stock. However, should shares close under $370, then the yellow flag will fly. And if Boeing ends the week below $360, then the bears should take control.

Ironically, these are the same numbers that we've been discussing for Boeing since April. But while the upside has never been broken, the downside did crack ... and trading bears were rewarded.

Regardless of whether this triggers Boeing higher or lower, I think BA stock will once again reward directional traders. I see that as an end-of-the-year trade, while the Boeing-vs.-Airbus trade is a 2020 opportunity to keep in mind.

Twice the triggers should provide plenty for traders to consider.

Get an email alert each time I write an article for Real Money. Click the "+Follow" next to my byline to this article.
TAGS: Fundamental Analysis | Investing | Stocks | Technical Analysis | Aerospace | U.S. Equity | Stock of the Day