By TIMOTHY COLLINS Dec 24, 2019 | 11:47 AM EST
Stocks quotes in this article: BA, ERJ, EADSY
If your holding is appearing as the "Stock of the Day" month after month, sometimes even week after week, it generally isn't a positive thing. Sure, it can be, but in my experience, it is not.
Boeing ( BA) is a perfect example. Now, the discussion of the 737 MAX may have reached a max. It appears the company reached a point where it had heard enough, and something needed to happen. Dennis Muilenburg resigned his position as CEO to begin the week.
I believe the more appropriate take is the board permitted him to resign so he could receive his full separation benefits. Being fired for cause is rarely beneficial for an executive. After the debacle that the 737 MAX has become, this move had to happen. Boeing needs to try to change perception. Perhaps, new CEO David Calhoun can implement a fix for the problem facing the MAX, but he can't change the past.
Christmas Eve brings a new wrinkle for Boeing. The company's purchase of Brazil's Embraer ( ERJ) is being delayed by European regulators. The main concern appears to be the reduction in the number of global jet producers from three to two. Of course, the regulators didn't have any issue when Europe's Airbus ( EADSY) , the potential lone-standing competitor to Boeing, purchased and rebranded the A220 from a Canadian company. That puts only two major companies competing for business in the sub-150 seat airplane market.
Boeing likely seeks to integrate Embraer's tech and design for future jets, including one to replace the 737 MAX. The European Commission indicated the probe will continue for two more months, at least, and this is great news for Airbus. The 737 MAX has given it a leg up in the jumbo jet market, while the stymied merger of Boeing and Embraer has allowed Airbus to rule the sub-150 seat plane market.
Unfortunately, this all seems to add up to three strikes against Boeing in Europe. Regulators are concerned about the safety of the 737 MAX while at the same time they can give a boost to Europe's own Airbus as well as take a jab at the U.S. for tariffs in a subtle manner. 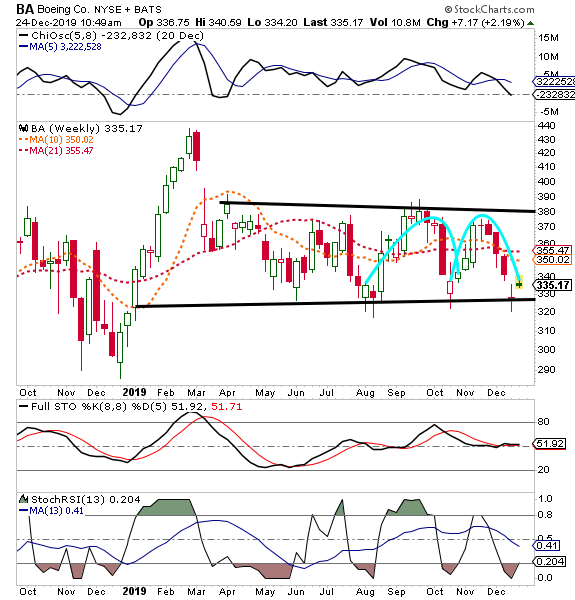 Despite all this news, the stock action has been more of the same since March. A very clear trading channel continues to churn along with $380 as resistance and $325 as support.
The current "M" pattern favors the bears, but until we break below $325 and close there on a weekly basis, the risk of shorting here sits around $40 compared to a reward of $10, assuming support and resistance hold.
Secondary indicators are mixed, but nothing is screaming long or short this holiday season. Should we get above $345, I'll look for more upside momentum. That means the current $10 range is somewhat of a no-man's land. There's no reason to get involved in this name now; however, with the continued barrage of negative news and the fact support continues to hold, one has to wonder if bad news even matters any longer. Based on the price action, it doesn't. Watch for a price trigger for a trade since news isn't doing it for the stock.
Get an email alert each time I write an article for Real Money. Click the "+Follow" next to my byline to this article.
TAGS: Air Travel | Investing | Stocks | Aerospace | Airlines | Stock of the Day