Boeing Co. (BA) was mentioned during Jim Cramer's "Mad Money" program Monday, with Cramer noting that Boeing has found a way to beat the bears in this market. I think that observation warrants a look at the charts and indicators here on Tuesday.

In this daily bar chart of BA, below, we can see how prices declined from early March to a low in August. Prices bounced to a new high for the move up in September and pulled back to make a higher low in October. Prices are testing the underside of the flat 200-day moving average line and the slightly declining 50-day line. All of this is going on amid all the negative news about the Boeing 737 Max.
When a company/stock does not go down on bearish news it is bullish (and when a stock does not go up on bullish news, it is bearish). The daily On-Balance-Volume (OBV) line has made a large sideways pattern since March, suggesting that despite the unfavorable company news investors have not been all that aggressive on the sell side. The Moving Average Convergence Divergence (MACD) gave cover shorts buy signals in August and early November, so we could see a cross of the zero line and an outright buy signal soon.

In this weekly bar chart of Boeing, below, we can see a long sideways trading range or consolidation pattern. It would be easy to say that the chart was bearish, but that would not be totally accurate now. Prices are just at the underside of the slightly declining 40-week moving average line. The weekly OBV line shows a decline from early March, but recently the OBV line shows an uptick. The MACD oscillator is just slightly below the zero line and a little price strength might turn this indicator bullish.

In this Point and Figure chart of BA, below, we can see a potential upside price target of $436. 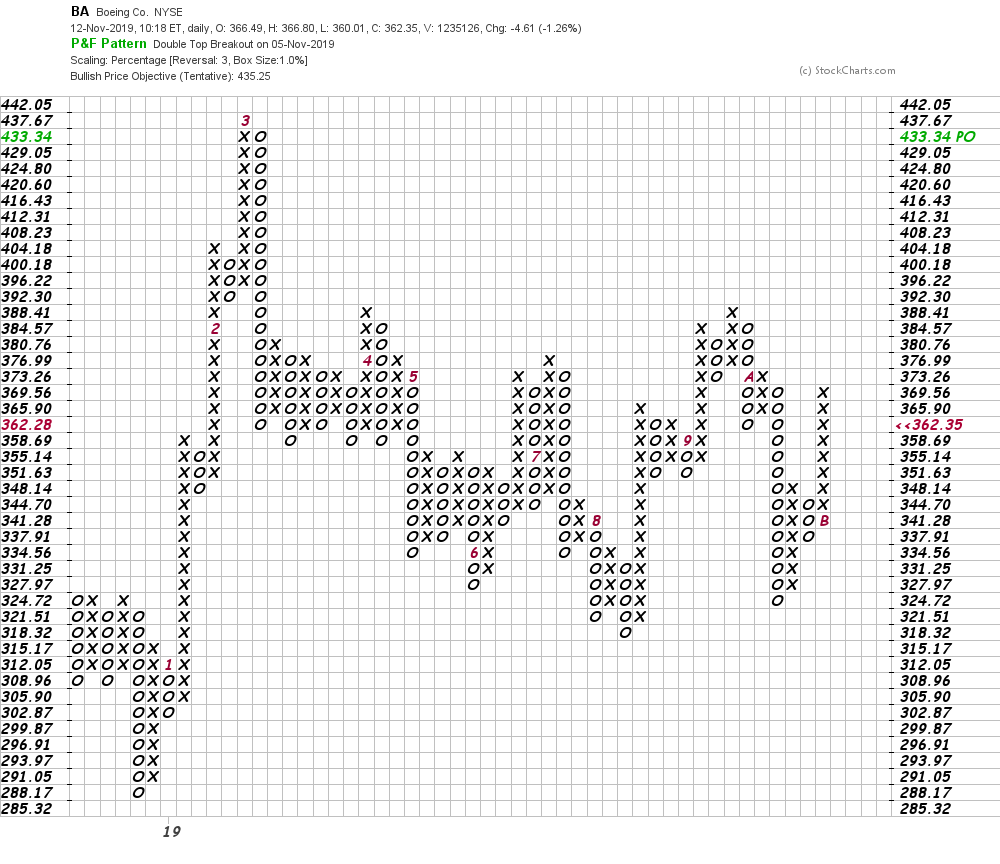 Bottom line strategy: Despite the negative news aura surrounding BA, the charts are telling us a different story right now. Traders who can afford to risk a close below $340 on BA could approach from the long side.
Get an email alert each time I write an article for Real Money. Click the "+Follow" next to my byline to this article.
TAGS: Investing | Stocks | Technical Analysis | Aerospace | Defense | Transportation | Mad Money | Real Money