Obviously, there are hits and misses. Many firms will beat expectations throughout earnings season. Not all beats are, however, created equal. I came in this morning flat Boeing (BA) after trading in and out of the name as the share price wobbled throughout the fourth quarter. That was a miss. The firm's performance not just across that volatile quarter, but all year long, was more than a hit. This was an epic beat.

For the fourth quarter, Boeing reported Non-GAAP earnings per share of $5.48. This is versus expectations of $4.57. No kidding. How about this... after the application of generally accepted accounting principles, the number improves to $5.93. See a lot of that this earnings season? I don't think so. Revenue, and revenue projections have really become the big dogs in any earnings report in recent years. Let's go there. The firm reports revs of $28.3 billion, beating expectations by nearly a billion and a half American dollars. You getting all this? Talk about "own it, don't trade it".. gee whiz.

Full year 2018? Revenue of $101.1 billion. Let that sink in. For the quarter, Global Services grew 29%, Defense grew 16%, and Commercial Aircraft saw growth of 14%. All systems go. Trade War? Apparently less of an issue for Boeing than most talking heads (self included here) had expected.

Next Year? CEO Dennis Muilenberg thinks it will be even better. For 2019 the firm is guiding toward revenue of $109.5 billion to $111.5 billion. BA expects to deliver somewhere between 895 to 905 commercial aircraft in 2019, up from 806 in 2018. The order backlog for commercial aircraft, which obviously can not be satisfied in one year, is up to, in dollar terms... $412 billion. Business my friends, is good. 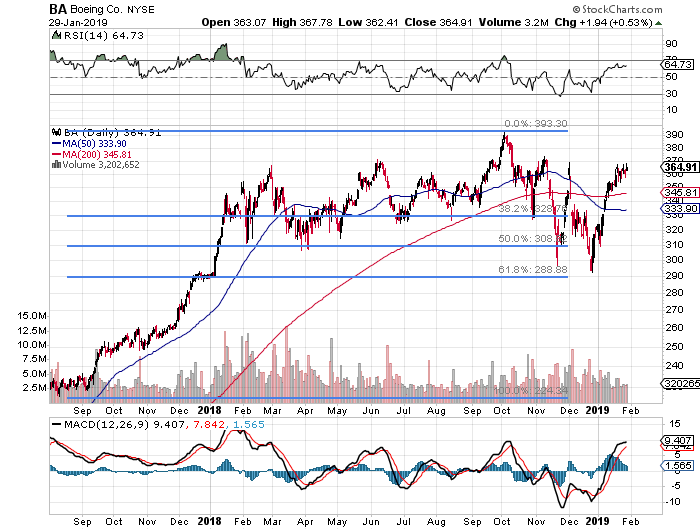 What I see here, besides the accuracy of the Fib retracement, is that upon opening, the shares will likely challenge the highs of October. That forces the question... Can Boeing regain the trend lost at that time? That trend, must less steep over the first nine months of 2018, is much more realistic than it had been prior. A positive headline out of Washington, and perhaps a golden cross after that would then ignite an algorithmic response.

I would like to re-initiate Boeing with a purchase. I just do not buy stocks at the top of the chart, so I must wait. I am likely to sell puts at levels well below the last sale once those markets get going, but understand this... selling puts in names that trade at almost $400 is not safe for home-gamers, so I will not lay out an example for you. For an investor long at least 100 shares however, I think the sale of a covered call just to reduce net basis would be wise. That means that if you insist on going there today, consider a Buy-Write strategy, or you could wait for the next risk-off day with me and add a small entry size position somewhere in the mid-$370's.

Get an email alert each time I write an article for Real Money. Click the "+Follow" next to my byline to this article.
TAGS: Earnings | Investing | Markets | Options | Stocks | Technical Analysis | Trading | Aerospace | China | Stock of the Day

Can a Company With Attractive Results Be an Ugly Stock?

The short answer is yes, as the shares of cosmetics maker Estee Lauder have shown over the years when they've become overvalued.

Here's My Narrative on the Market's Action