Boeing Co. (BA) is the Stock of the Day at Real Money after its board moved to separate the roles of CEO and chairman in the wake of its 737 MAX crisis. In addition, President Trump has suggested that the China trade deal could spur $20 billion in sales for the aerospace company headquartered in Chicago.

Let's check out the charts and indicators here on Monday morning to see if this latest fundamental news could impact prices in a sustained way.

In this daily bar chart of BA, below, we can see two developments or trends. First, it is easy to see a peak in early March followed by a decline into August. Prices have improved from the August nadir and have even broken over the highs of June and July.

I can also see another pattern from April to now that looks like a base pattern despite the company's negative news. Prices are above the rising 50-day moving average line and the bullish 200-day line and a rally above the September highs should set the market up for a strong year-end rally.

The daily On-Balance-Volume (OBV) line shows fresh strength from August, and a rising OBV line means that buyers of BA are now acting more aggressively. They must be looking beyond today's headlines and negative news. The Moving Average Convergence Divergence (MACD) oscillator in the bottom panel is above the zero line in buy or bullish territory.

In this weekly bar chart of BA, below, we can see a shift from a few months ago, when the long-term chart of BA looked like a large top pattern. Since the low in August the top looks like it is morphing into a large continuation pattern that could mean significantly higher prices for BA's shares in the months ahead. Prices are above the 40-week moving average line and the weekly OBV line may be done declining. A rising OBV line from here would be a strong positive. The weekly MACD oscillator is crossing above the zero line for a longer-term go long signal.

In this Point and Figure chart of BA,below, we can see a potential downside price target of $338, but a rally to $393.20 would be a new high for the move up and it would refresh the uptrend. 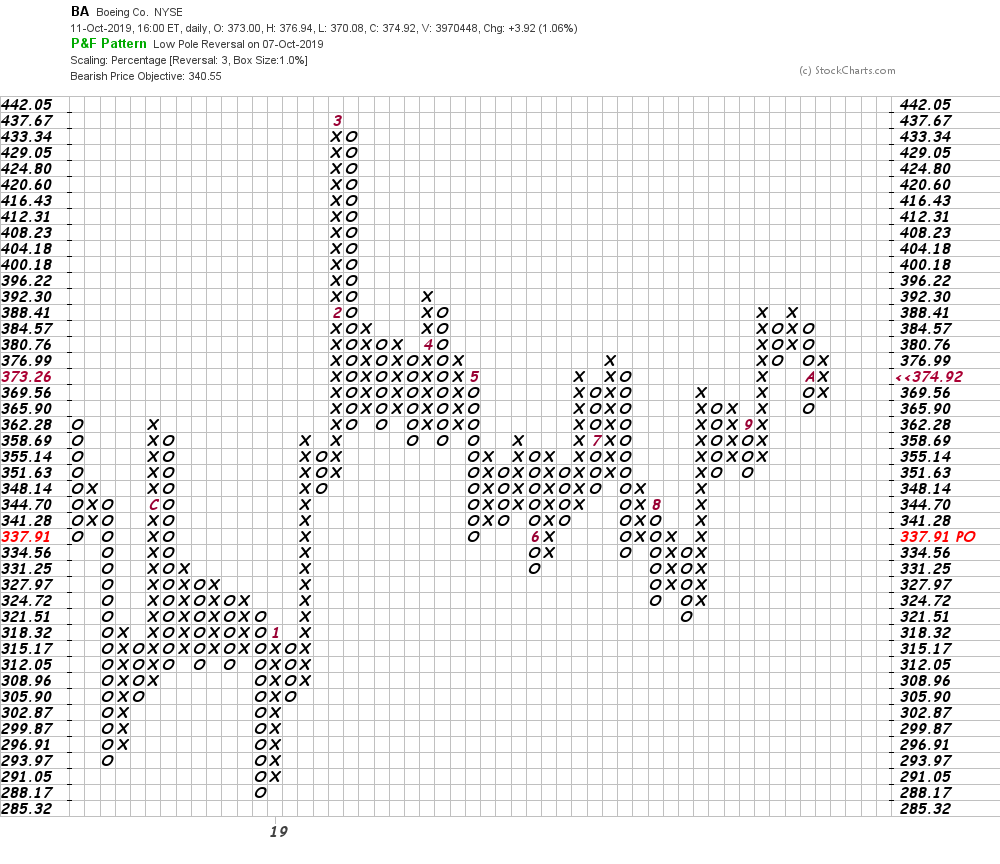 Bottom line strategy: I have been bearish on BA for several months, but over the past 40-plus years of looking at charts I have learned not be a perma bull nor a perma bear. The charts and indicators of BA have shown improvement and there is no reason to fight the tape. Aggressive traders could go long BA in the $380-$370 area if they can risk to $350.

Get an email alert each time I write an article for Real Money. Click the "+Follow" next to my byline to this article.
TAGS: Investing | Stocks | Technical Analysis | Aerospace | Defense | Real Money | Stock of the Day