News about Boeing Inc. (BA) is well known in the marketplace and continues to unfold -- and it hasn't been positive.

Sometimes investors look ahead of current headlines and they ignore or discount negative press. Other times investors decide to reduce their long exposure and that looks like the situation with BA.

Let's go through our usual collection of charts and indicators to plot a strategy for the weeks ahead.

In the daily bar chart of BA, below, we can see that prices broke support around $360 earlier this week. BA is trading below the declining 50-day moving average line and it has broken below the flattening 200-day line. Trading volume was heavy in early March when prices gapped sharply to the downside.

Volume looks like it has been heavier than average or "normal" the past two months and the daily On-Balance-Volume (OBV) line has been declining signaling more aggressive selling by market participants.

The Moving Average Convergence Divergence (MACD) moved below the zero line in March for an outright sell signal and it is still bearish.

In the weekly bar chart of BA, below, we can see a number of trends. From the middle of 2016 to early 2018 BA was in a strong and impressive uptrend. This uptrend was followed by a neutral or sideways trend for the next year. More recently BA broke out on the upside in a new uptrend but that trend has reversed.

Currently, BA is below its 40-week moving average line. The weekly OBV line looks like it peaked in early March and has turned down suggesting that sellers of BA are now more aggressive.

In this Point and Figure chart of BA, below, we can see a potential downside price target of $312 being projected. 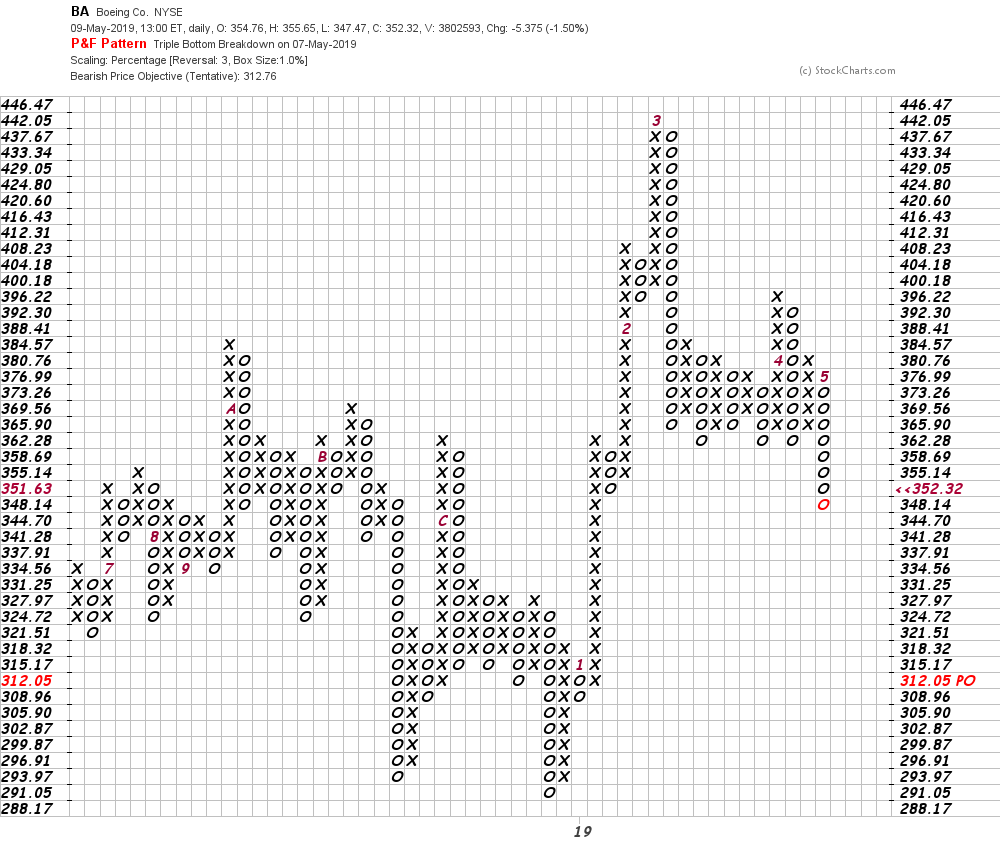 Bottom-line strategy: Traders and investors in BA have been sellers of the stock since early March. Unless traders start to become aggressive buyers, I would be prepared for further declines with prices headed for the $310 area. If BA made a weekly close below $300 the charts would be even weaker.

Get an email alert each time I write an article for Real Money. Click the "+Follow" next to my byline to this article.
TAGS: Investing | Stocks | Technical Analysis | Aerospace | Airlines | Transportation