The trials and tribulations around Boeing (BA) are well publicized and documented.

The two 737 MAX jets that went down -- the Ethiopian Airlines flight in 2019 and the Lion Air flight in 2018 -- were both unnecessary tragedies and put a halt to this company's earnings.

In turn, the twin disasters put doubt in Boeing's future. But with new leadership, a fix for the plane and some time there is a chance this stock is ready to move higher. The year 2020 was a miserable year for Boeing, the worst performer in the Dow Industrials, down close to 35% on the year. It will lead the "dogs of the Dow" for 2021 (the five worst performers in a year should be bought the following year).

With the return of the 737 MAX into the air, there is hope this company can make it big over the next few years. In 2020, Boeing was brought to its knees, trading at one point under $100 bucks, a level not seen since 2013. But with time and fixes come some healing, and now the company is positioned for big things to come. Airlines have started to re-order the 737 MAX again, a positive for a company that had about five years of backlog before all the trouble occurred.

Nobody will forget those tragic plane crashes that killed hundreds of people, but to turn the page and look for a brighter future. Boeing is on notice, however, and any new issue could be a death sentence for the company. If the problems have been cleaned up, there is a chance for hope.

Everyone seems to forget Boeing is a big player in the defense industry. With some heady contracts up for grabs in the next couple of years, I expect to see Boeing grab its fair share of government spending. 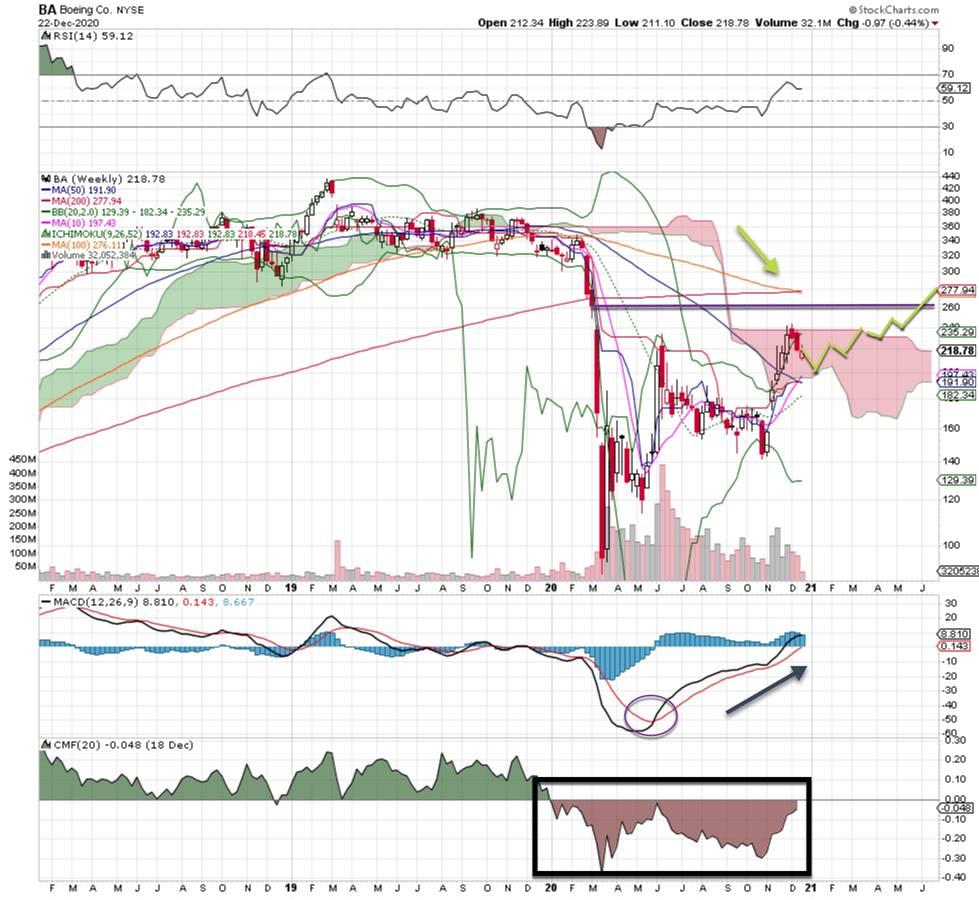 The chart is not all that inspiring on a daily basis, but if we look at the weekly, there is a better sense. Money flow has been bearish all year long but is starting to gain a bit of traction. The recent surge ended right at the top of the cloud, somewhat expected. If we can see the stock gain some support just below 200, if there is a pullback, that would be ideal. If no pullback, then the 200 week moving average intersects with the 100 week moving average around the $278 level; that is a good target. There is a gap to fill just below there, too. A 27% gain on this stock in the year ahead (from $218 to $278) would be magical and show the world investors are supportive of Boeing.

Get an email alert each time I write an article for Real Money. Click the "+Follow" next to my byline to this article.
TAGS: Investing | Stocks | Airlines | Industrials |