In the fast-paced Lightning Round segment of Mad Money callers get the chance to ask Jim Cramer about stocks they are interested in. One caller Monday night asked Cramer about Bluebird Bio Inc. (BLUE) . "If you're willing to take the risk of a speculative stock, I'll bless it," said Cramer of the biotech company.

In the daily bar chart of BLUE, below, we can see that the shares suffered a significant decline in the first quarter of 2020. Prices made a low in March and a successful retest in early April before rallying to a high in early June. Since June the shares have been slowly declining until this November and December when prices showed some fresh bottoming action. BLUE has rallied above the declining 50-day moving average line. The 200-day moving average line has turned flat and BLUE could test and maybe break the 200-day line soon.

The On-Balance-Volume (OBV) declined from late June to early December telling us that sellers of BLUE have been more aggressive. The OBV has improved from early December but it still has a way to go to break the downtrend from June. The Moving Average Convergence Divergence (MACD) oscillator looks like it is ready to cross above the zerol line for a buy signal.

In the weekly bar chart of BLUE, below, we can see a major downturn from 2018. The slope of the 40-week moving average line is just now bottoming.
The OBV line looks like it made a low in early November after a long decline. It will likely take a longer period of a rising OBV line to reverse the damage on the chart. The MACD oscillator is improving but still remains below the zero line.

In this daily Point and Figure chart of BLUE, below, we can see a potential upside price target of $74 but we also see a fair amount of overhead chart resistance. 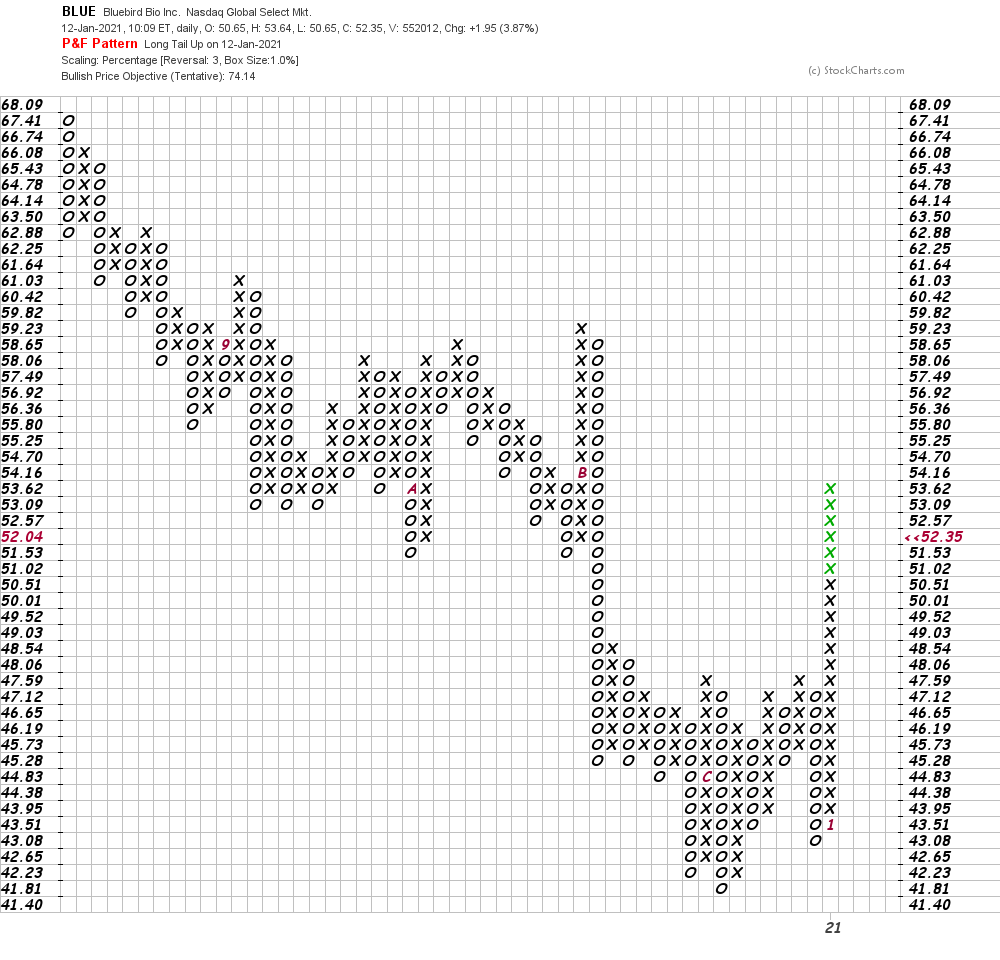 Bottom-line strategy: BLUE is making a bottom on the chart and I am in no rush to become a buyer.
Get an email alert each time I write an article for Real Money. Click the "+Follow" next to my byline to this article.
TAGS: Investing | Stocks | Technical Analysis | Biotechnology | Technology | Mad Money