Since earnings plays aren't everyone's cup of tea, I thought I'd circle back with you on a trade in the electric vehicle-related space that didn't rely on an unknown catalyst. I'm not saying there's a specific catalyst in the space, but with the momentum and the headlines continually drawing traders' attention to the group, it's not like we aren't without daily catalysts.

Blink Charging (BLNK) hasn't moved much over the past month, but the stock is up over 400% year to date. That's gotten the attention of short-sellers as the open interest of the short float has climbed to 18.5% of shares outstanding. With slightly less than 25 million shares available for trade that creates the potential for a squeeze. BLNK does trade 5 million shares per day on average, though, so even a squeeze should be somewhat contained.

Still, a squeeze would be enough to draw momentum traders. With the stock poised to close above the resistance level of a wide wedge pattern, a return to the mid-teens appears a very real possibility.

Three days ago, the parabolic stop-and-reverse flipped bullish. We see consolidation represented in the Full Stochastics indicator while the Moving Average Convergence Divergence (MACD) is in a strong uptrend. 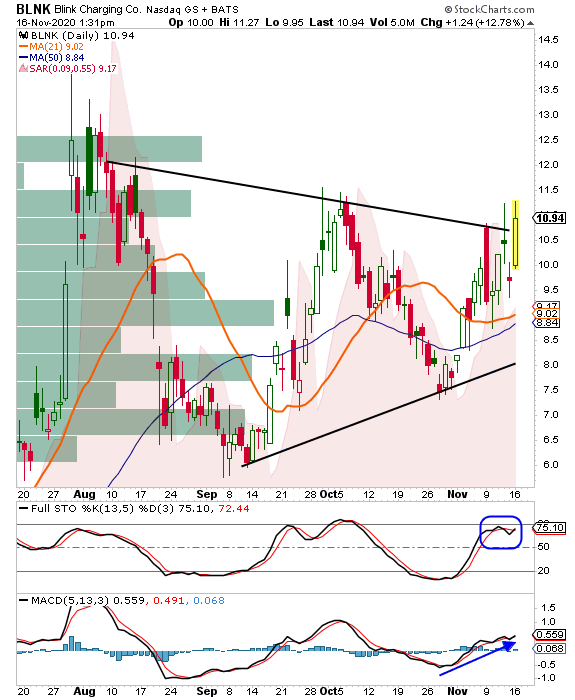 None of these guarantee a breakout, but if you aren't willing to buy a close over $10.80 Monday, then buying a push through today's highs later this week should be on your radar.

I like the idea of grabbing some exposure Tuesday with the willingness to add on a break above those late-September and early October highs. If the stock fails, then closing the half-sized position under $10 will stem some of the potential losses.

Get an email alert each time I write an article for Real Money. Click the "+Follow" next to my byline to this article.
TAGS: Investing | Markets | Small Cap | Stocks | Trading