Do you ever watch those courtroom dramas, where an attorney is questioning the witness and instead of answering with facts, the witness opines with all sorts of commentary? Then the opposing counsel stands up and calls out, "Objection. Speculation!"

I thought of that on Wednesday, when bitcoin collapsed in the early going. It's as if the last few months have seen the market cry out over and over again, "Speculation!" Just look at the list of speculative vehicles we have seen since January.

There were the electric vehicle stocks. The pot stocks. Biotech. Space. SPACs -- special purpose acquisition companies. Then there were the commodities. Lumber. Corn. Beans. Wheat. Copper. Iron ore. On Wednesday, the opposing counsel cried out, "Speculation!" and they took the cryptos down.

About the only area of speculation left is housing. You know, all those stories you hear about 30 people bidding a gazillion dollars over the asking price for a home. That, too, will probably change in 2021. It seems, one by one, they are being called out and taken back to earth.

So, perhaps the drop in bitcoin was as good a reason as any to take the market down on Wednesday. I would say we got a whoosh but not the whoosh. A real whoosh comes when we break a well-watched level. There was no breaking on Wednesday, there was revisiting last week's lows.

A real whoosh comes on volume, which we didn't see rise much on Wednesday, either.

We also saw the put/call ratio over 1.20 most of the morning. It ended the day well off those highs with a reading of 1.07, but that is the highest since last fall. So there was some concern in the market on Wednesday.

The Investors Intelligence bulls, which are tallied from last week, thus disregarding this week's negative action, saw bulls fall back to 54.5%. That is not a low number, but it is far off the high of 61% we saw a week ago and is now back to March 31 levels. On Thursday, we will get the much "fresher" readings from the American Association of Individual Investors (AAII) and the National Association of Active Investment Managers (NAAIM). 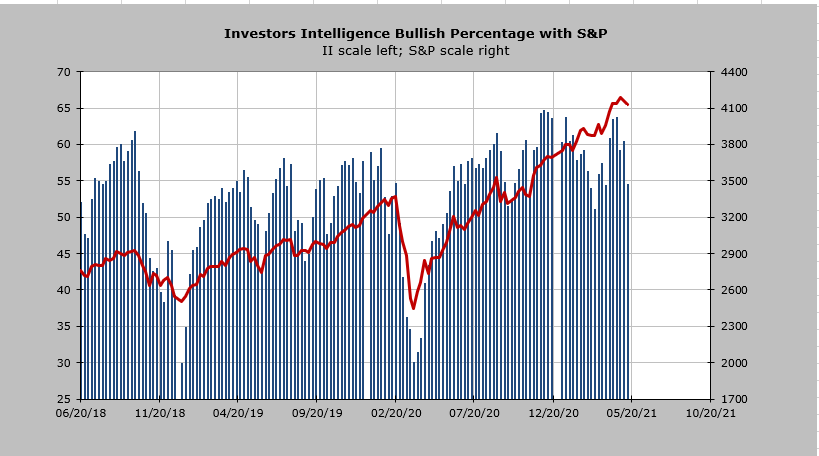 It has been my contention that there should be a rotation back into growth stocks, just because the negativity on them is so high right now. I have highlighted the Semiconductor Index (SOX) noting that it keeps holding the line dating back six months. But take a closer peek and notice that the SOX didn't make a lower low on Wednesday (vs. last Wednesday) and is now on the verge of making a higher high vs. last Friday.

I should make the point that breadth was not very good on Wednesday. But if we are to see bounce in growth stocks, we know that in the either/or market that means breadth will be crummy. I still think the trend is sideways.