President Biden has been asking Big Oil to use this profitable year to fight inflation through exploration and production and to further progress in green energy rather than realize a substantial portion of those proceeds. The idea of a windfall profits tax also has even been thrown around -- yes, even though 2020 was a year of huge losses for the industry and 2021 just barely got them back to where they left off in 2019. Big Oil needed to roughly triple 2020's losses this year just to resume the trend.

On Wednesday, Chevron announced that it would set a fiscal 2023 capex budget of $17 billion, which was at the top end of the range of $15 billion to $17 billion that had been a part of previously given guidance. Broken out, Upstream capex guidance includes $4 billion set aside for development in the Permian Basin and $2 billion for other shale assets. Within the $17 billion, there is also a $2 billion carve-out for projects that either reduce carbon emissions or increase renewable fuels production capacity. This $2 billion is more than a 100% increase from fiscal 2022 and the $17 billion number is more than a 25% increase over fiscal 2022.

On Thursday, Exxon Mobil tried to thread the needle. It tried to ramp up efforts to produce more, research more and return more... to shareholders. XOM announced that its capex budget will be closer to the top of an already given range of $20 billion to $25 billion that Exxon Mobil expects to hold through 2027. More than 70% of that investment will be deployed in the Permian Basin, Guyana and Brazil and for liquefied natural gas (LNG) projects globally. Exxon Mobil also plans to increase spending on the reduction of carbon emissions by 15% through 2027.

In addition, Exxon Mobil announced that it expects to "double earnings and cash flow" potential by 2027 compared to 2019, while delivering a rough $9 billion in structural cost savings by the end of next year compared to 2019. Now for the juicy part: Exxon Mobil announced that it will expand its corporate share repurchase program to $50 billion through 2024 to include $15 billion this year.

For the third quarter, Exxon Mobil posted adjusted earnings per share of $4.68 on revenue of $112.07 billion. Both numbers crushed Wall Street's expectations. XOM increased its quarterly dividend at that time to $0.91, currently yielding 3.5%. It is expected to report its fourth-quarter results in late January. Consensus is for adjusted EPS of $3.45 within a range spanning $2.85 to $4.15 on revenue of roughly $98 billion. The range of expectations for revenue generated runs from $85 billion to $115 billion. At consensus, the quarter would be good for earnings growth of 68.7% on revenue growth of 16.3%.

Now, let's check out Chevron. Chevron reported adjusted EPS of $5.56 on revenue of $66.64 billion. Just like with Exxon Mobil, these numbers crushed the street. Chevron left the quarterly dividend where it was at the time, $1.42 a share, which now yields 3.3%. Chevron is expected to report its fourth quarter the first week of February. Currently, the street is looking for adjusted EPS of $4.58 within a range spanning from $3.55 and $5.60 on revenue of about $53 billion. The range of expectations for the top line runs from $49 billion to $56 billion. At consensus, Chevron's quarter would be good for earnings growth of 78.9% on revenue growth of 10%. 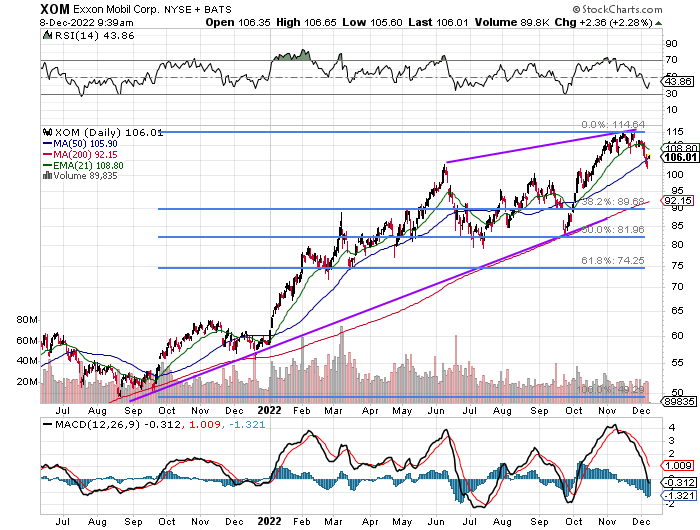 On the XOM chart, despite the market's strength here on Thursday morning, we see a weak to neutral reading for Relative Strength and an awful-looking daily moving average convergence divergence (MACD) coming off a recently overbought condition. We also see (in purple) a rising (narrowing) wedge that appears to be a little immature. That suggests potential for higher prices in the short term. However, we do not want to be fooled. Rising wedges are patterns of reversal. That means this chart is medium- to longer-term bearish.

XOM stock is currently engaged in a battle for its 50-day simple moving average (SMA). A failure here would allow the shares to fall as far as $92 (subject to, and will evolve). This is where the lower trend line of our rising wedge and a 38.2% Fibonacci retracement of the entire move from August 2021 through November 2022 both run along the same line as the stock's 200-day SMA. 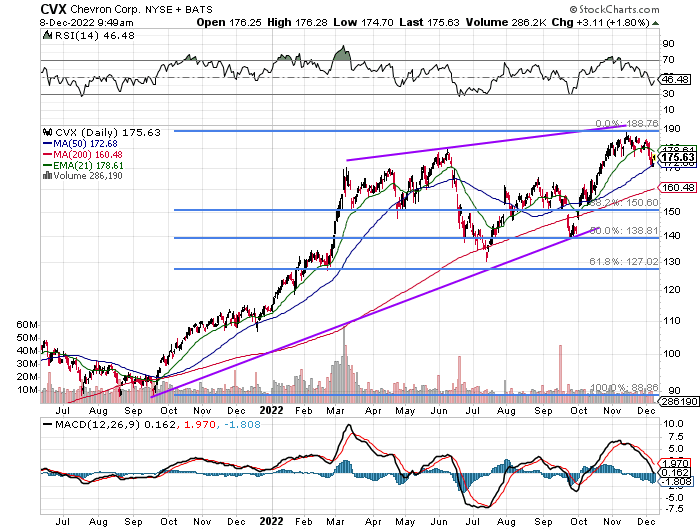 Looks pretty similar? Here we see in CVX a slightly more neutral RSI and a bearish but slightly less awful-looking daily MACD. The rising wedge is visible here and also under-developed as it was with XOM. We also see a fist fight at the 50-day SMA, but should that fail, we see a traffic jam forming where on the XOM chart a few levels seemed to line up together. The trend line, 38.2% Fibonacci retracement level and the 200-day line could all independently act as varying degrees of support.

I am already long Chevron. If one is long XOM or long both, one is not wrong. If one has avoided investing in Big Oil this year, then one has been wrong as a trader/investor. We don't do politics here, for we are mercenaries when it comes to providing for our families. I am also in Occidental Petroleum (OXY) , APA Corp. (APA) and Halliburton (HAL) to varying degrees across the space.

I already have reduced these holdings from their peak levels of exposure on my book. I expect to reduce further once the pages of the calendar turn. These companies will post nice quarters when their turn comes and they do pay shareholders handsomely. That said, a storm this way cometh. When the recession on the horizon actually becomes apparent to most, I don't know. I do know that I was at the shopping outlets by me last night. I dreaded going. The place is always jammed up this time of year. It was empty. I mean, like 8 a.m. on a Sunday empty. Maybe 10% of the stores have closed since summer. Incredible discounts on everything.

Yes, a storm this way cometh, and Big Oil will be a casualty. I'll be out or at least far less exposed. Perhaps by February.

Get an email alert each time I write an article for Real Money. Click the "+Follow" next to my byline to this article.
TAGS: Earnings | Economy | Fundamental Analysis | Investing | Oil | Stocks | Technical Analysis | Energy | Oil Equipment/Services | Real Money |