If we didn't have a market that was still so either/or, the S&P would be down 4-5% already. But that's not the market we have. The market we have finds itself with the big/mega cap names holding everything else up while the deterioration underneath is, in some cases, breathtaking.

Take a look at the Hi-Lo Indicator for Nasdaq. It is already down to .57. That doesn't happen because the majority of stocks on Nasdaq are participating; it happens because they are falling. 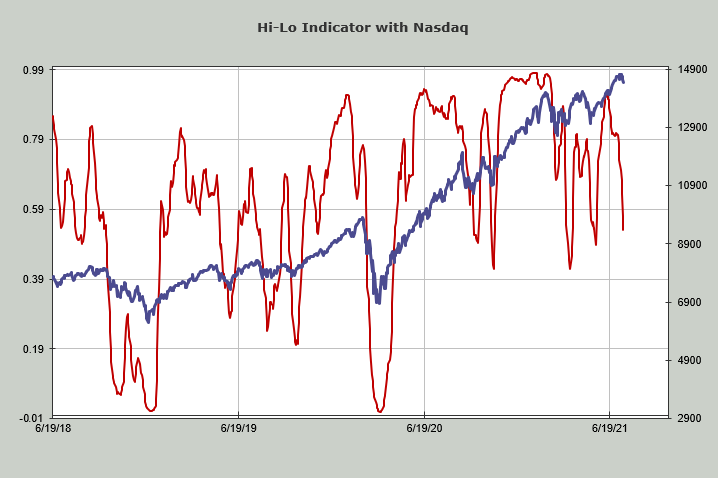 Or take a look at the Volume Indicator. It is currently at 46%, closing in on the same level it was last fall. But last fall the S&P was down 10% heading into that. Now? It's not even down two percent from the high.

These two charts tell us what is happening to the majority of stocks, not the ones in the big cap indexes. And it hasn't been a pretty picture. 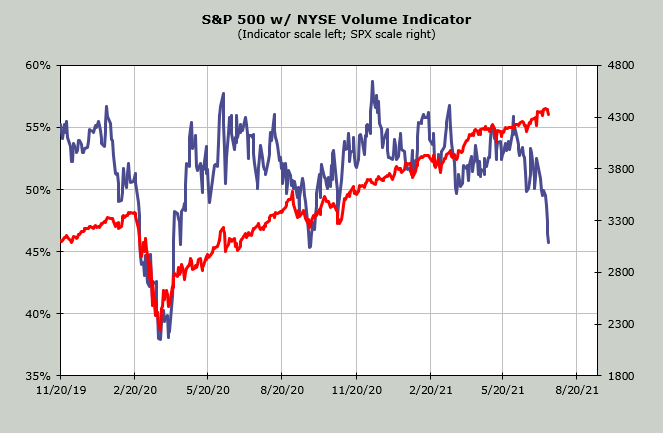 Those are both intermediate term indicators. The Hi-Lo Indicator I expect will get more oversold as this week pushes on, for no other reason than the math behind it. The Volume Indicator is likely to get more oversold as well. The good news is the Volume Indicator gets intermediate term oversold in the upper 30s/low 40s so it is getting close to that point, a lot closer than it was a week ago. Even in bear markets, we have rallied when this indicator gets oversold.

On a shorter term basis, we are getting oversold. When we look at the still-declining McClellan Summation Index we see that it now needs a net differential of +3700 advancers minus decliners on the NYSE to halt the decline. When this gets to +4000 I consider it extremely oversold.

My own Oscillator is getting oversold as well. But here too, these are based on breadth and you can see they are at the bottom of the page while the indexes are still at the top.

Friday also saw the put/call ratio zip up to .98. That is the highest such reading in a month.

Even the 10-day moving average of the equity put/call ratio has climbed. It is now closing in on the peaks of the last year. Another day or so and it should get there. Peaks in this indicator are often accompanied by oversold rallies in stocks.

My weekend Twitter Poll also showed signs of bearishness with only 40% of the folks looking for the S&P to have upside this week. That is unusual and in the past 15 months since I have done this weekly poll we have seen a rally in the subsequent week if it skews too negative as it has this week.

So short term we should rally this week, especially if we open to the downside on Monday and the VIX gets jumpy. On an intermediate term basis, it's going to take more than what we saw last week to get the Investors Intelligence bulls back down from the current 61%. It's going to take more to see the NAAIM Exposure Index back off from the current 92. And yes we should see some selling in the stocks that move the indexes at some point.